In 1791, in what is now Summit Hill, Carbon County, Philip Ginder was searching for a new millstone when he found a large outcrop of black, shiny rock. He reported his find to a local landowner, Jacob Weiss, whose blacksmiths had been using “stone coal,” in their forges. Impressed by the size of the deposit Ginder discovered, Weiss formed the Lehigh Coal Mine Company. However, his enterprise failed due to the difficulty of getting the coal from the remote mines to market. 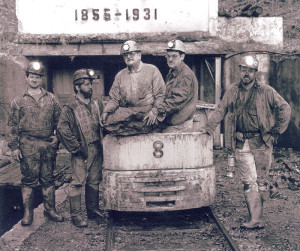 Twenty years later, Josiah White and Erskine Hazard succeeded. Their Lehigh Coal and Navigation Company established an efficient mining, transportation, and industrial network that revolutionized manufacturing and economic development not only in the Lehigh and Delaware Valleys, but in all of the United States. Because of anthracite, many towns and cities grew up in the coal regions and throughout all of eastern Pennsylvania. Anthracite’s hot, long-lasting fires triggered significant changes in industry, metallurgy, and chemistry, creating a lasting impact in the nation, far beyond the confines of the Lehigh and Delaware Valleys.

Coal, slate, cement, iron, and steel from this area helped build America. Much of America’s urban skyline is built on skeletons of Bethlehem Steel. But of all the industries, products, and enterprises born out of the coal-canal connection, none were as significant as iron.

1727: First iron furnace in the Corridor opened on Durham Creek near the Bucks-Northampton County line, about 1.5 miles inland from the Delaware River. The charcoal-fired furnace produced shot and shells for Colonial and British forces in the French and Indian Wars. Later, it made cannons and ammunition for the Continental Army in the American Revolution. During both conflicts, the furnace was managed by George Taylor, who signed the Declaration of Independence and was a prominent patriot leader.

1850: After more and more entrepreneurs built anthracite-fueled blast furnaces in the region, the Lehigh Valley became America’s leading iron producing region, a title it held until 1880. Keys to success included the readily available supply of iron ore, limestone, and coal, plus the canal system that provided easy access to Philadelphia and New York City markets.

The arrival of the Lehigh Valley Railroad in the 1850s prompted the formation of the company that eventually became the Bethlehem-based industrial titan known locally as “The Steel.” Here’s a short list of Bethlehem Steel highlights:

1857: Saucona Iron Co. opened in Bethlehem to supply pig iron for wrought-iron rails for railroads. The company name changed to Bethlehem Iron Co. in 1860, and its first rails were produced in 1863.

1873: Bethlehem Iron was the only Lehigh Valley iron maker to convert to steel making. By late 1800s, the company was forging heavy generator motors for the nation’s first electric power plants.

1880-90s: Company built the first super-heavy forging facility, launching the American defense industry and eventually producing guns, armor plate, propulsion machinery, and nuclear reactor vessels for American and foreign warships. From the end of the Civil War to the beginning of World War I, Bethlehem Iron was the world’s largest armaments maker.

Early 20th century: Name changed to Bethlehem Steel. The corporation was run by Charles M. Schwab, a lieutenant of industrialist Andrew Carnegie. During Schwab’s years at the helm, the company started making structural steel I and H beams that were lighter and stronger than anything on the market.

WWI: British government placed an order for submarines. The parts were made at the company’s shipyard in Fore River, Massachusetts, then shipped to a Canadian yard for assembly. France, Russia, Great Britain, and China ordered guns and munitions, as well as naval vessels.

Late 1950s: Company officials increased production capacity 50 percent to meet strong demand for steel during an anticipated growth era. The boom ended in 1958 when the market started shrinking. The company then faced the longest strike in its history (116 days), and the emergence of low-priced foreign steel. Bethlehem Steel continued to upgrade facilities, develop new technology, and diversify.

1990s: Faced with foreign and domestic competitors that could make steel more cheaply, Bethlehem Steel faded from the industrial scene, closing plants and laying off workers. Steelmaking ended in the Bethlehem facility in 1995, and the company declared bankruptcy in 2001. Local efforts to preserve key landmarks began.

Find out how
Delaware & Lehigh