From Easton to Bristol, the Delaware Canal moves through yet another distinct portion of the D&L Corridor. The expanse of Bucks County is dotted with farms dating back to the 1700s, along with quaint river towns and villages, which adds to its old world charm.

The region along the upper Delaware Canal largely escaped the effects of heavy industrialism. The continued use of the waterways preserved the area’s natural resources. Meanwhile, successful agricultural production and gentleman farmers helped maintain a rural aesthetic charm. The pastoral land near the Delaware Canal, with its fieldstone houses and covered bridges, was one of the cradles of the American Revolution.

Artists lend their creativity to the unique culture you’ll find 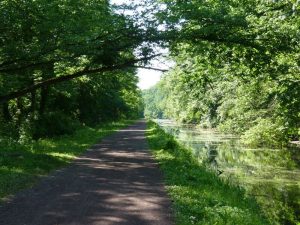 Industrial and commercial development changed the landscape of Lower Bucks county dramatically. South of Bristol, suburbanization followed economic expansion. The region quickly became a destination for families and visitors alike. The contrast between the relatively recent industry and the remaining historic landscape is striking — a must-see along the D&L Corridor.

Learn about the Anthracite Region and the Lehigh Valley Region.