During my summer long journey along the D&L Trail I have covered well over 100 miles, visited countless towns along the canals, and eaten way too much pizza. But so far, it’s been an amazing experience and with only three entries to go I’m beginning to feel slightly nostalgic as I drive past sections of the trail I explored earlier this summer on en route to the next trailhead.

This week’s voyage was a unique one.  It took me from Tinicum Park, just outside of Upper Black Eddy and the Frenchtown Bridge, to the very out-of-the-ordinary town of New Hope. On a sunny Wednesday in August I pulled a hybrid comfort/ road bike from the trunk of my car into the beautifully green land that is Tinicum Park.  Before I hit the trail I learned that you can also play Frisbee golf here or attend a polo match if the mood strikes. 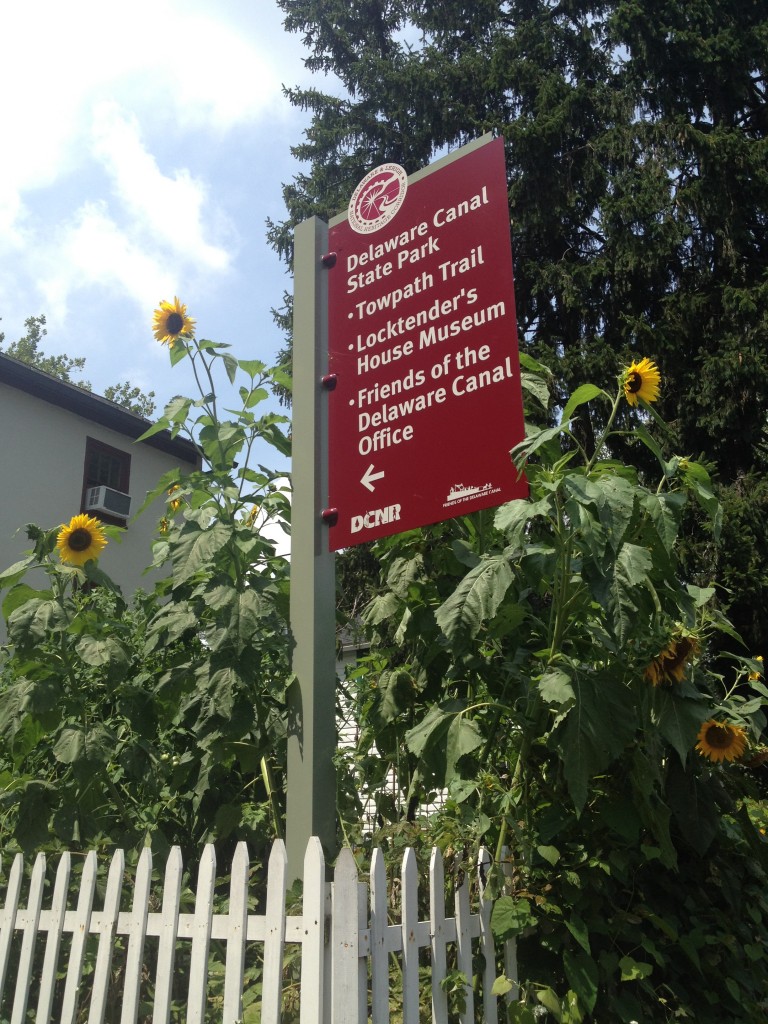 From my experience thus far along the trail, New Hope can be somewhat compared to Frenchtown NJ, the town I visited last week.  Imagine New Hope as Frenchtown’s older sister who went to college, traveled the world, and came back to settle along the Delaware River with all of her friends. In other words, Frenchtown and New Hope are somewhat similar in location and activity.  However; Frenchtown gives off a much quaint small town vibe where as New Hope radiates with a bold individuality and confidence.  More on downtown New Hope later, for now let’s talk about the trail that leads there.

The ride from Tinicum Park to New Hope and back is roughly a 30 mile loop, one of the longest rides I’ve done this summer. However, along the way I encountered a couple speed bumps, literally. Around the town of Lumberville the Delaware Canal tow path was damaged by flooding in the past years. This does not mean it is impassible, yet it does mean that unless you’re on a mountain bike its difficult to maneuver around the rocks and the roots. Even I struggled on the thin tired hybrid I was riding so I opted to cruise on the road for a few miles, which led me into Lumberville. 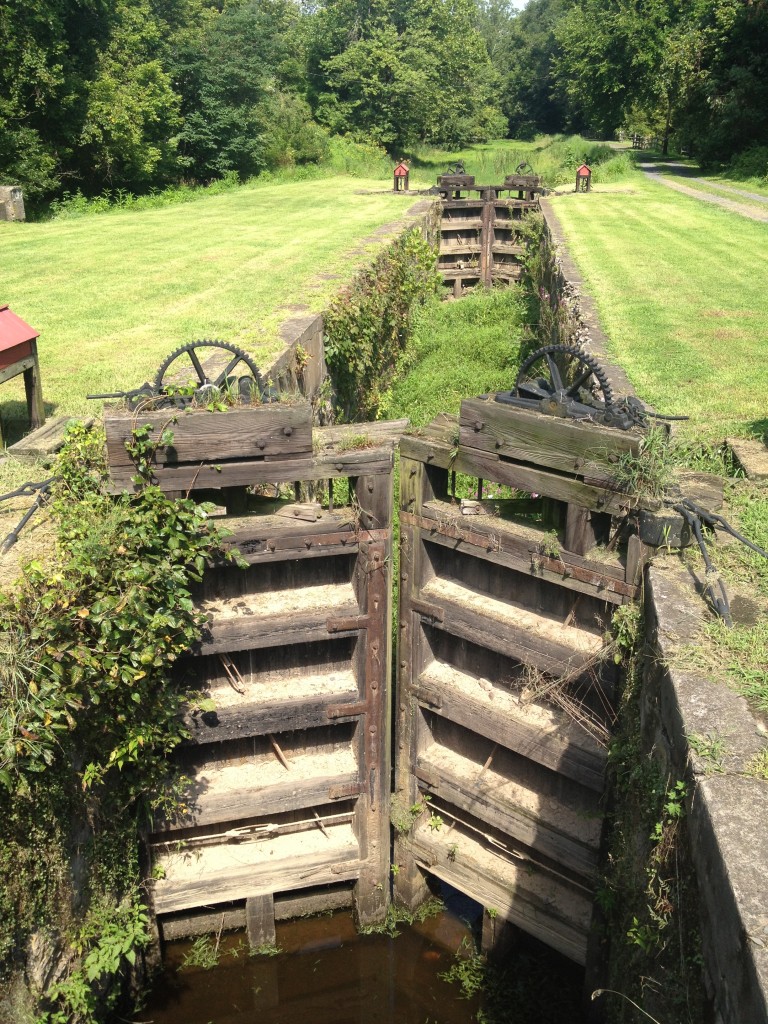 In Lumberville I stumbled into the Lumberville General Store, which was one of those places that I found by complete accident. I needed some air for my front tire so after seeing a sign that said “Bike Rentals Available” I decided to try my luck and ask to borrow their tire pump. Once I pushed open the thick wooden white door I knew I had made a good choice. The smell of something sweet and freshly baked began filled the air while two fully outfitted cyclists where sitting at a small table sipping espresso. I felt like I left the country for a moment. This place is a gem, for sure, and after conversing with the sweet woman behind the counter (who gladly let me use their bike pump) she directed me to cross the pedestrian bridge in Lumberville and to continue my journey on the other side of the river, in New Jersey. 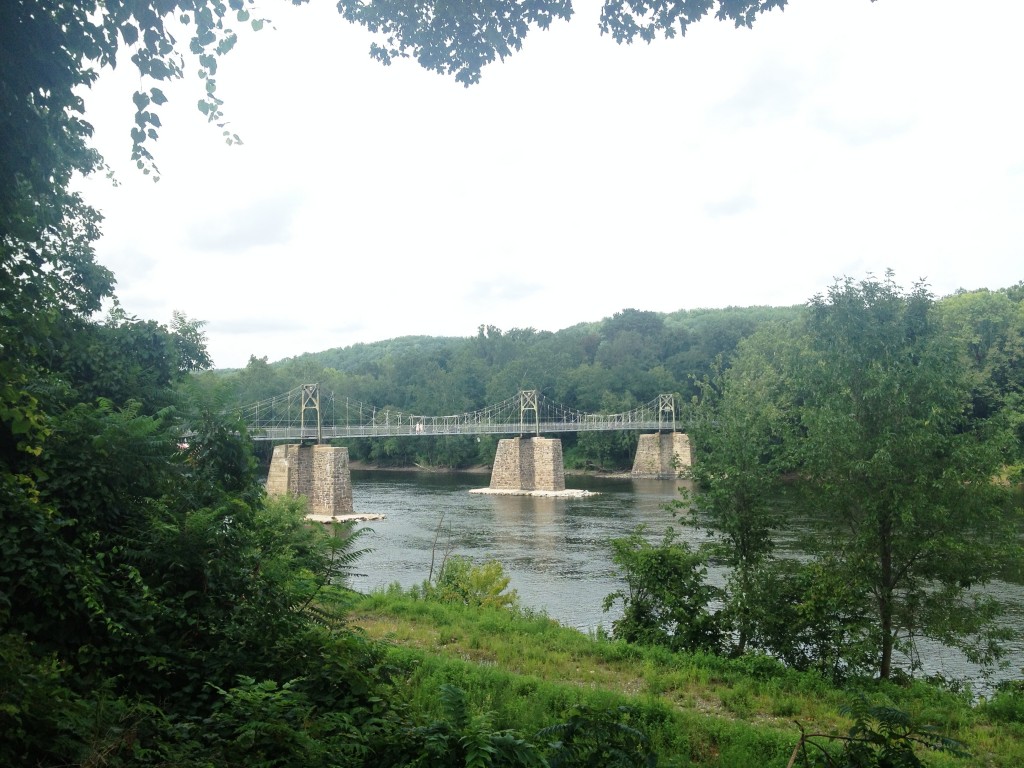 This ended up being good advice even though the Pennsylvania side of the trail begins to smooth out again just down the road near a local quarry and soon rides through some beautiful residences and directly along the Delaware. The Jersey side was surrounded by tall trees and thick brush most of the way to Lambertville NJ and New Hope.  If you’re considering looping between the D&L Trail and the D&R (Delaware and Raritan) Trail in New Jersey you can follow the many signs along both trails that map these loops out at bridge crossings along the Delaware River.

After riding along the D&R Canal Trail in New Jersey for a few miles I finally arrived in Lambertville, NJ, which is just across the river from New Hope. I crossed the six span bridge, similar to the one in Frenchtown, and started cruising through my destination. I quickly noticed the individuality and style I mentioned before. The houses surrounding the downtown area are quite large and the downtown area itself is filled with more specialty stores than I could count. Everything from designer clothing to exotic ice cream shops are laced between open air bars, fine restaurants, and burger joints. The town was flourishing with all different types of people even on this Wednesday afternoon and although all sorts of delicious smells were filling the air and it was definitely nearing lunch time, pizza wasn’t going to cut it today. I had to find something as unique as the town I was in. I opted for a gyro from Tahas of New Hope. This new place located directly next to the New Hope Visitors Center treated me well and fueled me up for the 15 mile ride back to my car in Tinicum for a good price. Similar to Jim Thorpe and  Bethlehem, New Hope is one of those rare PA towns that add a  shines a new perspective on  the historic corridor we all live in and, personally, I’m thankful for this twist.

Historically speaking, there is one last note I’d like to make before I finish this entry. There are a some really well preserved locks along the Delaware Canal and this section boasts a few of them. Also, the site where Tohickon Aqueduct once existed is still partially memorialized. Although it was demolished in 2000 a re-creation exists along this portion of this trail. Aqueducts once provided the Delaware with sufficient water for its commercial canals that were too far inland from the river.

If there is one thing that I have learned this summer from my internship here it is that historic artifacts take all shapes and sizes and can be found basically almost everywhere. Whether it’s right around the corner or directly next to the river all of these objects once played a significant role in the working of the canals and nearby industry. For example, although it seems like it’s hidden among all of the colors and store fronts in New Hope the Delaware Canal State Park, the Locktender’s House Museum, and Lock # 11 are just above Main Street.  Be sure to stop in for a glimpse of our history – they should not be overlooked.