A Beer Drinker's Guide to the Corridor 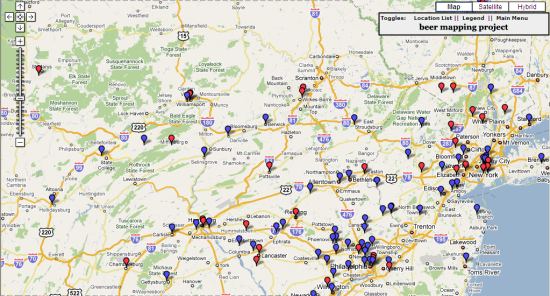 The Beer Mapping Project (no joke!) indicates the locations of breweries and brewpubs throughout Eastern Pennsylvania and the surrounding region.

People who live in Eastern Pennsylvania know it is an underappreciated Mecca of microbreweries, brew pubs, and beer bars. From Tröegs and Appalachian brewing companies in Harrisburg to Easton’s Weyerbacher, Downingtown’s Victory, Philadelphia’s Yards, Phoenixville’s Sly Fox, Adamstown’s Stoudt’s, Bethlehem’s BrewWorks, the many branches of Iron Hill, and dozens of breweries, bars, and distributors in between, there is an abundance of choices for the discerning beer drinker. 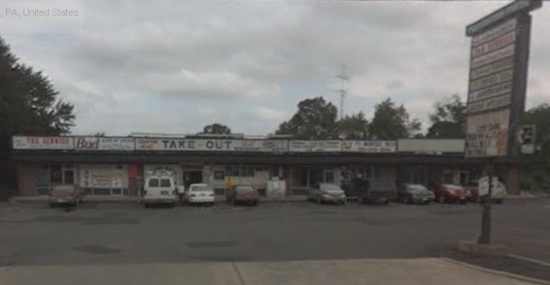 The Take Out isn't much to look at, but it features a bountiful beer selection.

For the sake of brevity, let’s narrow our focus to the bounty of beer selections within the Corridor itself. Imagine you are setting out on a weekend of adventure that will take you from the southern end of the Delaware Canal to the northern reaches of the Corridor. You and your friends will load up the car, fill the tank, grab some bags of pizza-flavored Combos, and hit the road, with the simple goal of drinking great beer in one of our nation’s most historic and dynamic landscapes. 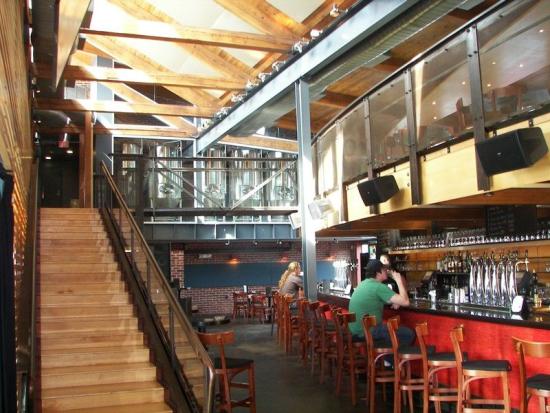 Because you’re a pragmatic beer drinker, your first stop will be at the Trenton Road Take Out in Fallsington. Here, you can stock your cooler with ice and a fine selection of American microbrews and rare imports to get you through the gaps between restaurants and breweries. The Take Out carries most of the big name craft brews, like Rogue, Dogfish Head, and Allagash, plus the standard macrobrews. 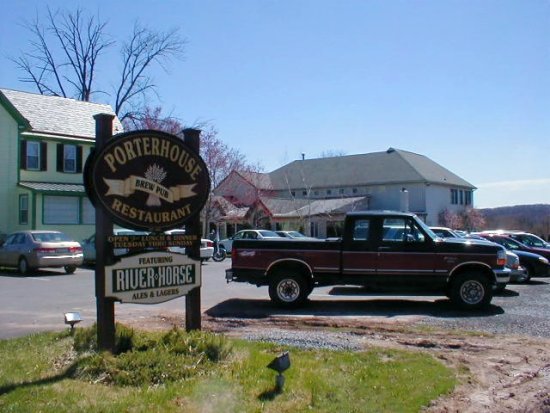 The Porterhouse in Lahaska offers its own and guest brews.

Armed with your cooler, you can begin to head north. You’ll want to stop in New Hope, home of Triumph Brewing Company, a brew pub that offers their flagship and seasonal beers on tap and an extensive menu of gourmet dishes.  Do yourself a favor and try their rauchbier, with just enough roasted barley flavor.  After you’ve had your fill, cross the street to the New Hope train station and hop a ride on the vintage, steam powered train. The train makes the 17-mile trip to the small town of Lahaska. 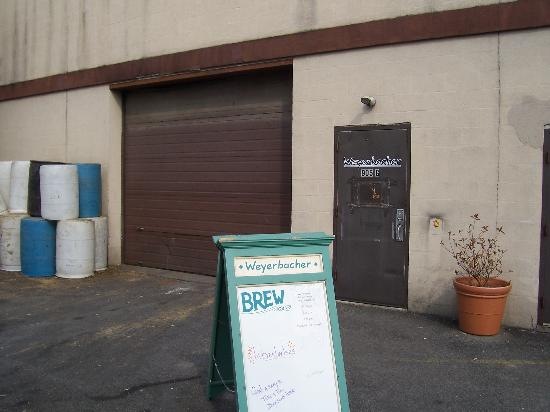 An inconspicuous warehouse is home to world-class Weyerbacher Brewing Company.

Jump off the train and head for the Porterhouse Restaurant and Brew Pub, which offers a respectable beer list, as well as their own brew.  Try their House Brown Porter.  The Porterhouse usually features several beers from a guest brewery, so you can familiarize yourself with their offerings too.  In the past, they have featured Yards and Philadelphia brewing companies, neither of which have their own restaurants.  Today it is Yards, so you enjoy an after-lunch Love Stout, and then have the designated driver head up scenic River Road towards Easton. 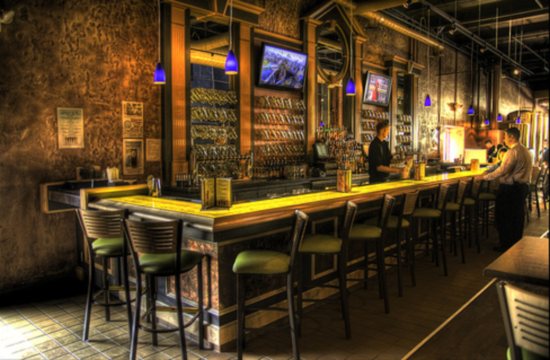 The BrewWorks has locations in Bethlehem and Allentown.

Easton is home to Weyerbacher Brewing Company, one of Eastern Pennsylvania’s world-class microbreweries.  Take a short tour of the brewery, before enjoying some free samples.  Although the company brews a couple beers that might slip into college sports bars, most of their line-up is geared towards the serious beer drinker, who can respect ABVs of up to 13% and beers that are packed with taste. Don’t miss QUAD, Weyerbacher’s award-winning quadruple style beer, which should go down perfectly on crisp November and December days.

From Weyerbacher, head west on Route 22 towards Bethlehem and Allentown. Each city boasts a branch of the BrewWorks, a brew pub that has a nice list of flagship and seasonal beers.  At the Bethlehem location, you will find the Steelgarden, a trendy, club-like lounge that redeems itself by offering over 100 Belgian beers.  When President Obama visited the BrewWorks, he stuck with the home brew and settled on the Fegley’s ESB.  A few miles to the west, at the recently-opened Allentown BrewWorks, you’ll find a respectable Beers of the World Menu, as well as an in-house tap list that differs from the Bethlehem location. During the holidays, order up the pierogie casserole and some Rude Elf’s Reserve to wash it down. 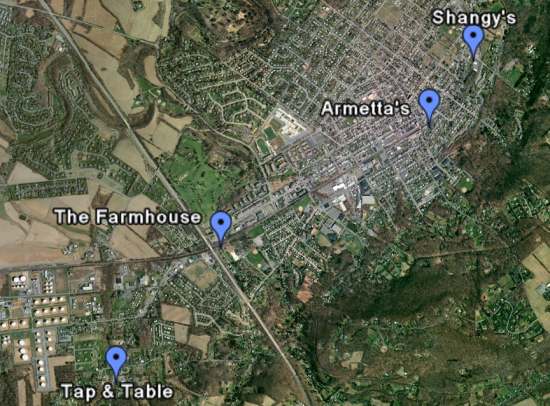 Since you’re in Allentown, head a few miles south to Emmaus. If we were on a quest for the greatest pizza in the country, we would head to Armetta’s on Main Street. Since it’s beer we’re after, you will want to try one of two places. In terms of ambiance and amazing beer, you cannot go wrong with the Farmhouse. Dinners will cost $25-40 a plate, but since we are still full from that pierogie casserole, we can just sit at the bar and enjoy a tap list that always has something special. Whereas some bars settle for a Sam Adam’s Boston Lager, the Farmhouse’s featured lager is typically something you cannot pronounce but is worth the linguistic struggle, like Aecht Schlenkerla Helles Lagerbier. More impressive than what’s on tap is the list of vintage bottled beers. Everyone knows that the best beers only improve with age, so how about an Eldridge Pope Thomas Hardy’s Ale bottled in 1986 or a Lindemans Cuvee Rene Gueuze from 1994? If there was ever a time to splurge on beer, this is it. 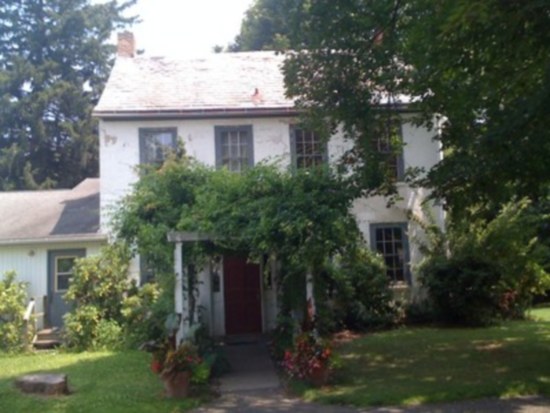 Your other choice is Tap & Table, which is located on the same street. With meals only slightly less expensive than the Farmhouse, you’ll probably want to order a cheese plate and save the rest of your money for the extensive draft and bottled beer selection. They don’t have everything, but they have more than enough to keep even the most intense beer snob satisfied. As a patriotic beer drinker, you’ll appreciate that the Tap & Table’s beer list includes America’s best beers, listed side-by-side with even the most prestigious imports. 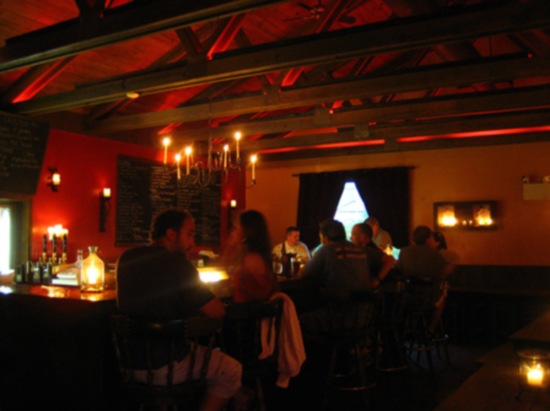 The cozy Tap and Table is home to great food and exotic beer.

Reluctantly leaving the Farmhouse and/or Tap & Table, check that cooler to make sure you don’t need to restock. If you do (and even if you don’t), head over to the Lehigh Valley’s most famous beer distributor: Shangy’s. This place is hallowed ground to most Eastern Pennsylvania beer drinkers. Visitors often drive over an hour to stock up on cases of local microbrews, rare imports, and glassware. You could easily spend a few hundred dollars buying cases of Sam Adams Triple Bock or some Duchesse de Bourgogne, but, hey, save some money for the rest of the trip!

With three world-class sources of beer and one mind-blowing pizza place, is it any wonder that Emmaus consistently ranks within Money’s Top 100 Places to Live. But, we need to keep moving. To bring ourselves down from beer heaven and to reaffirm that not all great beer is expensive, let’s stop at the Riverwalck Saloon in Parryville. Situated at the confluence of the Pohopoco Creek and the Lehigh River, with Lock 13 directly across the road, this is a good place to regroup before heading further north. The Riverwalck is a relatively new restaurant that offers standard fare, with a tex-mex twist. Station yourself on their expansive deck, order some nachos, and enjoy a Yuengling Lager. As the crow flies, you’re about 30 miles east of Pottsville, where Yuengling is brewed. Sitting here on the deck, river and creek flowing down below, golden lager in hand, you forget why you paid $17 dollars for a trappist ale at the Farmhouse. Must have been the Pecorino San Marzalino… 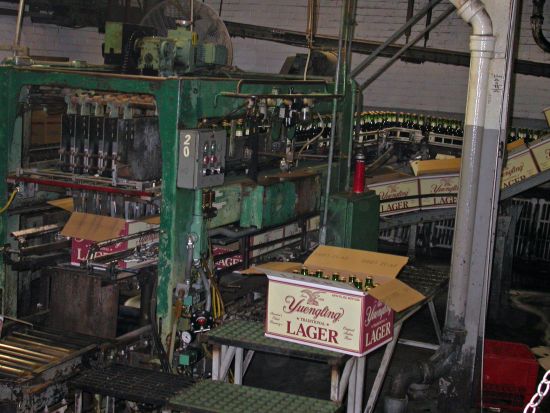 Bottles of Yuengling roll off the line at their Pottsville brewery.

Anyway, you have your eyes set on the north, so you keep on moving. If you had the time, you would stop and camp in Hickory Run State Park (although your cooler might be more welcome in a private campground). Maybe you’d fish in the Lehigh or the numerous streams emptying into it. Perhaps you would hop on a bike or raft and ride through the Lehigh Gorge. But, this weekend you’re on a mission, so you keep on going until you hit Wilkes-Barre-the symbolic terminus of the Corridor. 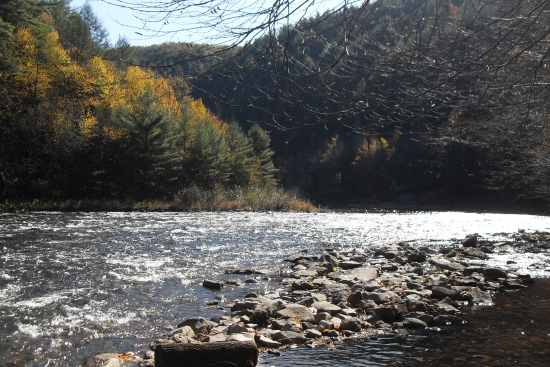 You regret hurrying past the Lehigh Gorge's spectacular scenery.

Wilkes-Barre’s Lion Brewery, built in 1905, is the second largest brewery in the state. You’ve probably had one of their beers and just never realized it. In addition to Lionshead, their flagship line, Lion also brews the well-known Stegmaier brand and the lesser-known Pocono, Gibbons, and Bartels lines. Lionshead drinkers know that the best part of opening a fresh bottle is the tiny rebus puzzle on the underside of each bottle cap. You are a savvy tourist, so you checked Lion’s website to reserve a spot on their tour and get to watch a large brewery in action. They don’t have a pub or restaurant, but you can sample the product at the end of the tour. 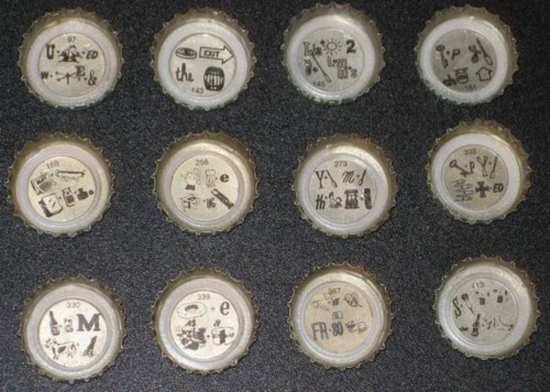 Under each Lionshead bottle cap is not only a great beer but a fun rebus puzzle.

You worked up an appetite from walking all of those narrow stairs between conditioning tanks, brewhouses, and bottling machines. Now you want to sit down and enjoy a meal. The impressively-named Elmer Sudds Ale House is one option. This is a traditional pub, and they’re proud of it. They have reasonably priced food and a good tap list, featuring several of Breaker Brewing Company‘s beers, as well as some microbrew mainstays. Why not try Breaker’s I Love PA–a cleverly named IPA that appeals to the hearts of lifelong residents of the Commonwealth? The other option is the Anthracite Café, which boasts a more developed menu and an impressive bottled list. Right now the ‘cite has several pumpkin ales on tap, but they do a nice job of matching their offerings to every season. 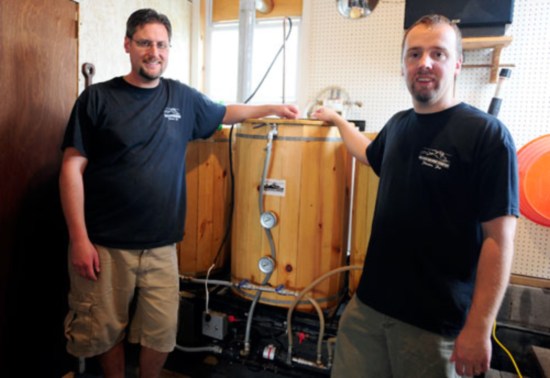 You will find Chris Miller and Mark Lehman's Breaker Brewing Company beers on tap at Elmer Sudds. (Photo reproduced from the Keystone Edge)

So, you finally made it to the top of the Corridor. You’ve eaten and drank your way through most of Eastern Pennsylvania, and you even have a couple bottles of Pennsylvania’s hands-down greatest beer, Tröegs Nugget Nectar, left in the cooler. “But,” you think to yourself, “I drove the whole way to Wilkes-Barre, and I can pretty much see Scranton from here. Dare I go just a little bit further, so I can visit my favorite spot in northeastern Pennsylvania?” You turn to your travel mates, who are all thinking the same thing. “Come on,” everyone yells. “We’re going to Coopers!” 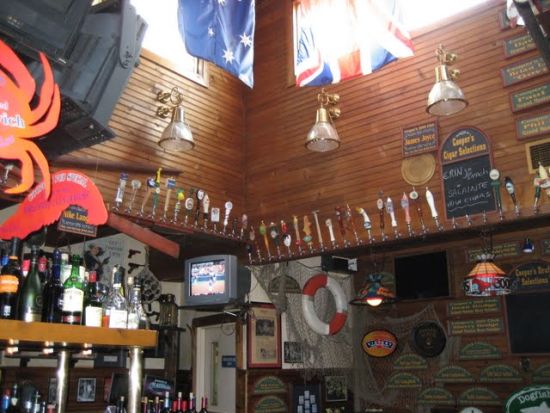 Coopers' display of tap handles is a testament to their wide-ranging beer selection.

Believe it or not, Coopers Seafood was awesome even before The Office began referencing it as a favorite meeting place of Kevin and other staff members. Since 1948, this place has been serving great seafood in a hard-to-describe nautical atmosphere, complete with a pirate ship exterior. With over 400 beers on their bottle and tap list, there is something for everyone. Oh, by the way, when it is your birthday, Coopers gives you a free lobster dinner. Need I say more? You’re feeling adventurous, so you decide to try out Coopers’ Pittston location, which features the irresistible Coopa Cabana. What better way to celebrate the end of your journey than a night of dancing in a coal-region tiki bar? 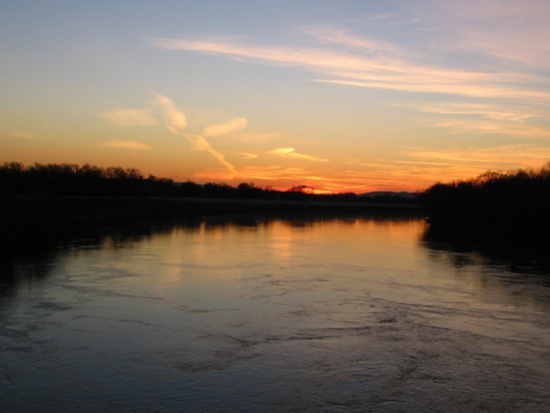 As the sun sets over the Susquehanna, you reflect on your trip.

As you stand on the deck of the Coopa Cabana and watch the sun set over the sinuous waters of the Susquehanna, you can’t help but reflect on the great beer you drank and the timeless memories you made this weekend. Could any place in the world rival Eastern Pennsylvania for excellent beer, beautiful scenery, and honest folk? Methinks not; God broke the mold…

You must be 21 years old to consume alcoholic beverages.  Always drink responsibly.

The D&L 2.0
Solar and geothermal and biomass, oh my!