An interview with Jay Luke, author of When Coal was Queen

Looking for a new local history read? Check out Jay Luke’s recently-published When Coal was Queen: The History of the Queen City-Olyphant, Pennsylvania. The new book documents the heritage of the small, coal-mining community of Olyphant. Luke, a local artist, worked with the Olyphant Coal Miners’ Memorial Association to compile the history, which includes lots of historic photos and maps, in addition to highlights of local fire companies and famous residents and visitors. 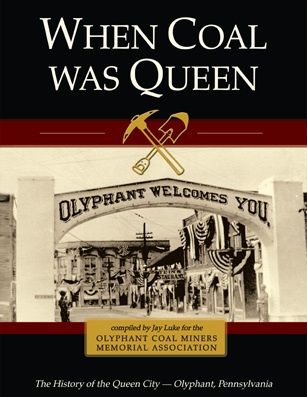 Located northeast of Scranton, Olyphant’s economy was dominated by anthracite coal mining and transport.  In the late 1850s,  the 16-mile Delaware & Hudson Canal gravity railroad was extended through town, in order to access Olyphant’s high-quality anthracite.  This furthered the economic development of the town and ensured that coal would continue to drive its history.

Luke does an nice job of balancing the often-colorful history of mining with its harsh realities.  He recounts the devastating 1903 mine cave-in that swallowed a number of buildings and the 1911 mine fire that took 72 lives and spurred state regulatory legislation, as well as the everyday hardships and frequent labor disputes that made mining towns difficult places to live and work.  Ultimately, however, the tough existence of Olyphant miners created a level of solidarity, clearly expressed in the proliferation of town assocations, such as fire companies and historic groups, even as coal mining lost its dominance over the regioanl economy.

The book includes short biographies of famous Olyphant natives, such as the first woman to enlist in the Navy and actresses Patricia Cowley and Judy McLane, and noteworthy visitors, such as President Theodore Roosevelt, who visited the town in an attempt quell labor violence.  Luke also documents the origins and meanings of street names, and provides plenty of historic photos of various streets and neighborhoods.

I recently asked Jay Luke a few questions about the book.

D&L: In two sentences, please tell  our readers what  When Coal was Queen is about?

Jay Luke: When Coal was Queen is a detailed look into the history of Olyphant and its rich coal mining past. It is meant to reconnect readers to the forgotten past through the use of stories and photographs.

D&L: What provided the impetus for your research, and how did it evolve into a book?

Luke: I found it quite remarkable that at first glance it seemed I’d really have to dig to get information on Olyphant’s origins. But after speaking to many older residents and looking through old newspaper articles, I found such cumulative bits of knowledge that it became a case of what to leave out of the book rather than being too short on information. It was a relief but it also left the door open for a future publication.

D&L: What is your favorite historical story or fact that you discovered during work on the book?

Luke: There are so many, but I would definitely think that researching the famous residents who came from Olyphant was the most interesting part. I had no idea that famed actress Patricia Crowley was from Olyphant. She once graced the cover of LIFE magazine and made appearances in nearly every popular television series over the years – everything from Happy Days to Friends. Also it was interesting to find out that President Theodore Roosevelt visited Olyphant to seek a solution to the mining relations problems in the early 1900s. So many other stories to tell and not enough room to fit them all.

D&L: Do residents of Olyphant generally recognize their rich history, or is this book meant to fill what you perceive as a gap?

Luke: That is a question that really depends on who you ask I suppose. In my case, I found that many older residents know quite a bit of history on Olyphant. Many remember their grandfathers, fathers, and even some living residents working in the mines and toiling in the dark underworld. The important function of this book is to educate the youth on where their ancestors came from and how they helped to build what became known as the Queen City. In the eyes of the youth today, there is such little left physically from the mining days that it is easy to see why they might not have a clue what really went on in Olyphant during its booming anthracite days. So yes, I do hope that this book will bridge the gap from the past to the present.

D&L: Why should people living outside of Olyphant care about the town’s history? In other words, what unique role did Olyphant play in state, regional, or national history?

Luke: The town really played an incredibly important part in the coal mining world. Literally tons and tons of coal came out of the town and provided warmth to many families. As far as national history, there is one fact that stands above most and that is Olyphant’s Loretta Perfectus Walsh. She earned her place in fame by becoming the first woman to ever serve our country and enlist in the US Navy. The town has many interesting facts and tidbits which many people haven’t discovered yet. I truly hope that this book will encourage residents to dig a little deeper and see what they can learn about
the storied past of the town.

Many people, even some of those familiar with northeast Pennsylvania, have probably never heard of Olyphant, but Jay Luke makes a good case that the town’s history is worthy of attention.  For more information or to purchase the book, please click here.

How 'bout a hand for…
Landmark Towns Mural, Landscaping Project a Community Achievement