In 1904, Mansfield Merriman, a civil engineering professor at Lehigh University and respected expert on hydraulics, delivered a report to Jay S. Moyer of the Lehigh Coal and Navigation Company. In December 1903, Moyer had commissioned Merriman to conduct a detailed survey of the Lehigh Canal system and determine the feasibility of generating power from the channeled water. This was not a novel idea. The Lehigh Canal was primarily built for the transportation of coal, but other large canal systems, such as the Augusta Canal, were constructed solely for their hydraulic power, with transportation a convenient and lucrative secondary benefit. 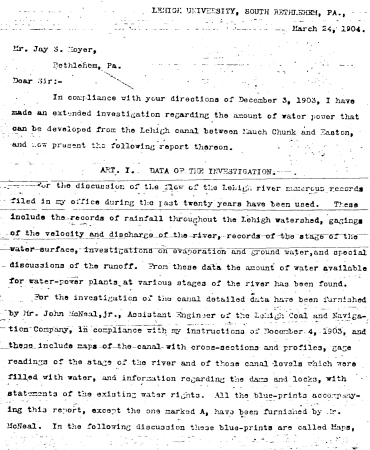 Working in an office full of documents relating to river flow, flood stages, lock heights, land ownership issues, and turbine schematics, Merriman pieced together an estimate of the latent power of the river and its canals, as well as a tally of the power generated from existing plants. In his Report on the Water Power Obtainable from the Lehigh Canal, Merriman offered several specific conclusions:
1) The amount of power generated by the plants existing in 1904 was approximately 2300 horse power.
2) Twenty-nine additional locations could provide sites for power plants. These new plants could generate 10200 horse power, 80 percent of the time (when the river was high enough.)
3) The amount of power “wasted” by the Lehigh’s nine dams was approximately 8000 horse power. 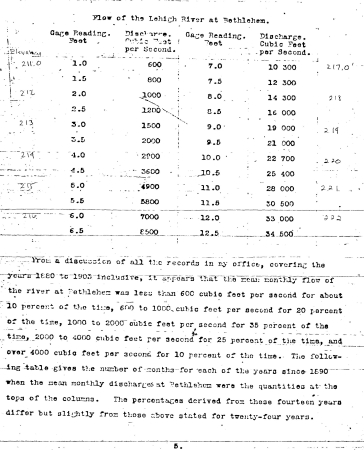 He also noted, possibly with an eye towards the railroad-dominated future, “that the accounts of power above stated as obtainable from the canal may be very materially increased if boat navigation should ever become discontinued, since higher velocities [of water]…may be permitted,” therefore providing more “fuel” for the hydraulic turbines. 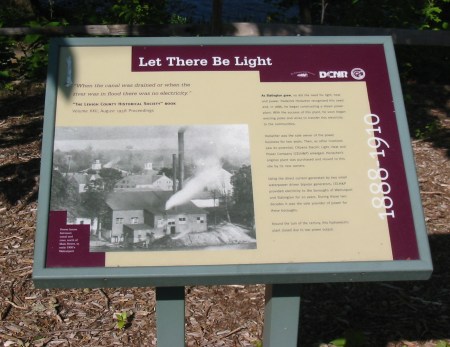 [One of the D&L’s interpretive signs describes the nineteenth-century hydroelectric power industry in Slatington.]

Forgotten during the years of coal and oil abundance and energy security, the idea of harnessing the water power of canals is experiencing a renaissance. Innovated hydraulic technologies, such as the Gorlov Helical Turbine, make small-scale, aesthetically-pleasing power generation a real possibility. Constructed to power a specific building or tied into the grid, these projects could help ease our reliance on fossil fuels and even contribute funds to trail and preservation projects.

[Mansfield’s 1904 report to Moyer is available from the Special Collections of Lehigh University Library, Bethlehem, PA.]