Artist Billy Selesnick has returned to New Hope to restore the most extensive of the many murals that he painted around town in the 1990’s. The five Delaware Canal murals, located at 145 South Main Street adjacent to the Locktender’s House and Canal Boat Ride Landing, have weathered over the 16 years since they were created and their historical scenes have lost their vibrancy. 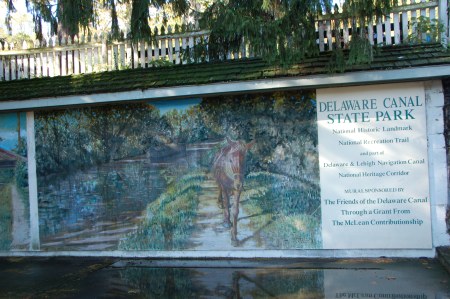 During the last two weeks in August, Selesnick used his talents to bring the murals back to life, but he also enlivened the south end of New Hope by demonstrating his techniques and talents for the town’s summer visitors. Selesnick, who now lives in Palm Beach, Florida, said, “I’m really excited to be back, working and seeing my family and old friends.” 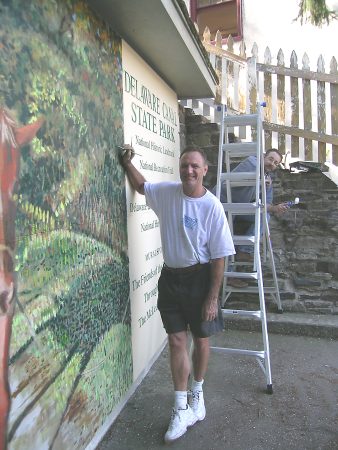 The restoration of the Canal murals is being sponsored by the Friends of the Delaware Canal, the non-profit organization that fostered their creation when a shop, called the Basket Case, burned to the ground in 1992 leaving a gap in the streetscape.  Eventually, the Friends decided to create a series of murals to fill the void.

The project, which serves the dual purpose of illustrating both the history of the Delaware Canal and the rich arts tradition of New Hope and Bucks County, was originally funded by a grant from the McLean Contributionship. The current restoration is being supported by grants from the PA Parks and Forests Foundation and the D&L. To close a small funding gap, contributions are being sought from the public. To support the Canal Mural Restoration project, donors may send contributions to Friends of the Delaware Canal, 145 South Main Street, New Hope, PA 18938.

To learn more about the Friends of the Delaware Canal, one of the D&L’s most important partners, visit www.fodc.org.