In 1967, a Norwegian engineer named Harald Wibye moved to Philadelphia to work in the Turbine Division of Westinghouse. He stayed in the area for a little less than a year, before returning to Norway, yet he had an enduring impact on an emerging sport: orienteering. Orienteering is a competitive sport that clocks participants’ ability to navigate a marked course using only a map and compass.

Long taught by the military and used by rugged outdoor enthusiasts, map and compass navigation gained popularity during the post-war period as the availability of cheap, reliable compasses, such as the ubiquitous Silva, increased. By the late 1960s, when Wibye arrived on the east coast, orienteering was already a popular sport in Europe. School-age children participated in mass competitions and young and old alike navigated local forests on the weekends.

The energetic Wibye sought to generate the same enthusiasm in the Delaware Valley. He conducted three events in the fall of 1967 alone, each of which drew dozens of participants. At first, many were Westinghouse co-workers, but as the word got out (through Wibye-authored press releases and presentations to local outdoor groups) people from throughout the region came to the events. A 1967 Philadelphia Inquirer article claimed, “In moments of great enthusiasm, Wybe speaks of orienteering becoming as popular as baseball in the U.S.” That prediction may have been a little too optimistic, but, by the time Wibye left the country the next fall, he had certainly established the new sport and galvanized a group of dedicated fans. 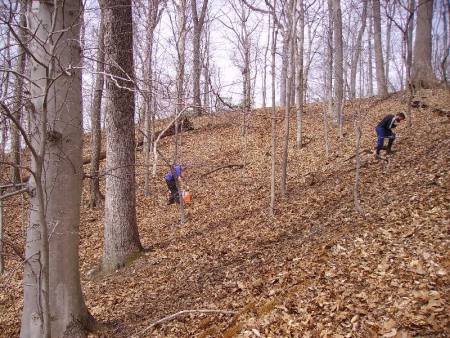 Those fans continued their interest in orienteering through the Delaware Valley Orienteering Association (DVOA), founded in 1967 and now the oldest and largest civilian orienteering club in the nation. DVOA continued to organize meets, standardize rules and procedures, produce its own maps, and publicize the sport. Meanwhile, the popularity of orienteering rapidly spread across the nation. Today, the club has about 700 members and conducts approximately 45 meets each year. Although DVOA members participate in the leading national and international competitions, club meets have something for everyone, from novice to expert, young to old, and leisurely to hurried.

DVOA maintains an excellent website and holds events throughout the Delaware and Lehigh valleys. So, check out their schedule, grab your compass, and take part in what Harald Wibye began over 40 years ago.

This brief history draws from an article by long-time DVOA member Caroline Ringo, which is posted on the club’s website.