Posted in Along the D&L Trail, Construction Updates, On the Trail, Trail Improvements, Trails 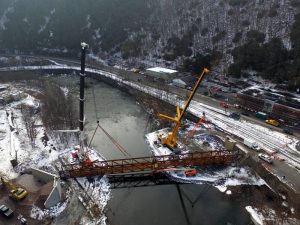 You may have noticed that the Mansion House Bridge at Jim Thorpe truss system was recently lifted by two cranes and placed onto the bridge abutments, but you cannot yet use the bridge to cross the river. We’re working on that!

Although lifting the truss was a huge milestone for the project, the Mansion House Bridge is not yet finished. When the contractor returns in spring, the decking surface will be installed, the western abutment will be finished and custom painted, railings and gates will be installed, an access road will be constructed, along with a number of odds and ends that will make for safe and enjoyable trail use. Shortly after the bridge project is finished, construction will begin on a retaining wall reinforced ramp on the east side of the river to create a safe and universally accessible connection between the elevation of the bridge and the towpath portion of trail. If a feasible and safe detour around the construction zone is not possible, this retaining wall project may temporarily prevent use of the pedestrian bridge. Continue reading for details on when you will be able to use this exciting new section.

Click HERE to watch a video of the bridge installation.

For roughly a week prior to “lift day,” the contractor worked to assemble the bridge truss’ six sections into two halves, one on each side of the Lehigh River. Starting at 8:30 a.m. on Dec. 19, two cranes lifted each respective half of the bridge and very carefully maneuvered the truss halves over the river so that the center connection could be made. Nearly 100 bolts were installed at the center connection and it turns out it’s fairly difficult to install bolts into two 125-foot-long trusses suspended in the air; this step alone took eight hours. Once the truss was joined securely into one long piece, the two cranes had to move in unison to lift the then-250-foot truss up above the elevation of the abutments.

The crews maneuvered around into position on either side of the river to guide the bridge down and into place just after the sun had gone down. (The truss itself needed to fit over bolts on the pad of each abutment.) These pads allow for the truss to move or shift slightly with any load the truss may carry, either from humans, wind, snow, etc. In order to fit this very long bridge onto those fairly small pad bolts, the eastern side of the bridge had to be set in place first. Relying on very bright work lights, the eastern end of the bridge nestled down onto the bolts and pad nicely, so the crews then focused on the western end.

After all both ends were set, the truss was almost exactly where it should be, but it was still roughly half-inch above the abutment pads. As a precaution, the crane operators had continued to hold almost the full weight of the truss, reluctant to let off the weight until everything was triple-checked. When they got the all clear, one crane slowly set the full weight of the bridge down, some 300 tons, shortly followed by the other crane. With that, the truss made contact with the abutment pad at roughly 9:30 p.m.

As we mentioned in our last post, with the bridge project moving along nicely, we are turning our attention to the next, much needed improvement project directly adjacent to the bridge. Currently, our projected project schedule has the construction of a retaining wall reinforced ramp and trail improvements beginning in when the bridge project finishes. This means that although the bridge will open for our June 11 Mansion House Bridge dedication ceremony, our detour is not yet confirmed, so the bridge may close again very soon after opening.

Celebrating Five Years of Get Your Tail on the Trail
D&L Trail Programs: Data Matters