For a week in late July, 350 cyclists from across the nation made their way through eastern Pennsylvania as part of the 2010 Greenway Sojourn, sponsored by the Rails-to-Trails Conservancy (RTC).  During the sojourn, which has grown into a very large and popular event, cyclists pedal dozens of miles each day and enjoy meals and activities provided by the RTC with the help of local organizations. Sojourners typically camp at predetermined sites along the way, but they do enjoy some nifty conveniences—like a set of portable showers on the back of a flatbed truck! 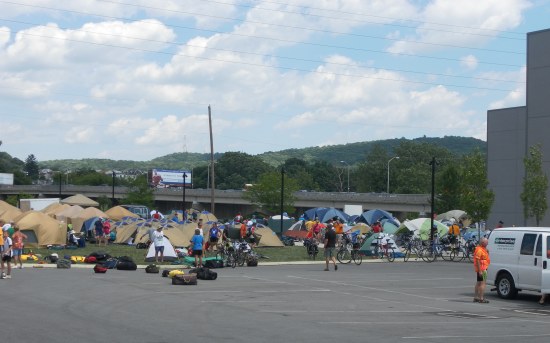 Starting out from Philadelphia, this year’s group pedaled along the Perkiomen Rail-Trail and Schuylkill River Trail for three days. Arriving just north of Reading, they piled into buses for a short trip to the northern reaches of the Corridor at White Haven, Carbon County. From White Haven, the cyclists followed the long stretch of D&L Trail through Lehigh Gorge State Park. At the end of the park, they used the new Carbon County trail section to access Historic Jim Thorpe via the Nesquehoning Trestle. 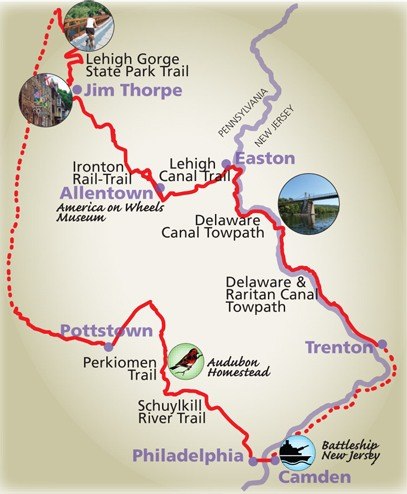 The 2010 Greenway Sojourn passed through 250 miles of PA's finest land.

After spending a day in Mauch Chunk Lake and the museums and restaurants of Jim Thorpe, the cyclists-come-swabs took to the low but pleasant waters of the Lehigh River for a rafting trip. They spent the night camping inside and around Allentown’s America on Wheels, where–in addition to the regular museum exhibits–they were regaled with photos of D&L Trail projects, an eclectic bicycle display, and the music of folk singer Jay Smar. 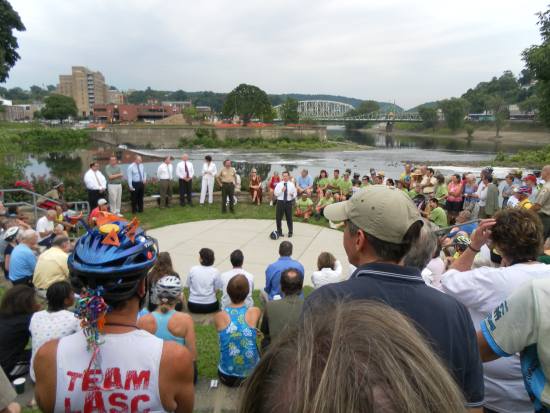 The next morning, the sojourners followed the canal towpath between Allentown and Easton, where they participated in the long-anticipated rededication and reopening of the Delaware Canal. DCNR Secretary John Quigley was on hand to celebrate the completion of extensive flood repairs and watch as water from the Lehigh River once again filled the canal. After grabbing some ice water and baggies of the D&L’s famous trail mix, they continued down to the towpath. After biking 50 miles that day, they camped on Bull’s Island in New Jersey’s Delaware & Raritan Canal Park. Sticking on the east bank of the river for the final leg of their journey, the sojourners headed for Trenton, where they hopped a short train ride back to their starting point near Philadelphia. In all, they traveled 250 miles of rail trails, towpaths, and roads. 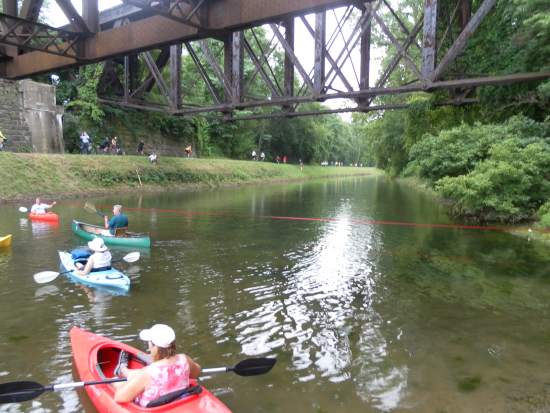 Sojourners pass on the towpath, as kayakers embark on the rewatered canal.

D&L staff helped with various aspects of the sojourn, from laying out the route to sponsoring water breaks to providing entertainment at evening camps. It was a great experience for all of us who were involved. More importantly, the work of the RTC brought 350 cyclists to the D&L Trail and allowed them to experience the natural and historic resources that make the Corridor such great place. We hope they enjoyed their stay!