How often do we get 60-degree temperatures in early March — and on a weekend, no less! Two weeks ago, I decided to take advantage of the beautiful weather and do some hiking on the Appalachian Trail on the west side of Lehigh Gap. Late last fall, I was in Slatington for the afternoon and had an hour or so to spare, so I started up the AT moving west and north from the trailhead at the Rt. 873 bridge. I managed to take in some good views and enjoy the foliage, but darkness fell before I could reach the summit. 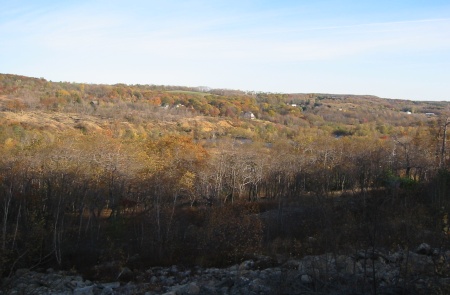 This time I decided to devote the whole day to hiking, so I wouldn’t miss out on anything. I also decided to start north of the ridge rather than south. I knew the Allentown Hiking Club and others have been devoting considerable time to blazing and maintaining a trail network to access the side of the mountain and connect to the AT, which runs just south of the ridgeline. I hoped to check out some of their accomplishments, while finally summiting the ridge.

I parked at the East Penn Township Boat Launch and walked south on the D&L Trail into the Lehigh Gap Nature Center‘s (LGNC) property. This section of trail will continue to see improvements over the next couple of years, but it is already well-suited for walking. In some places, there is large ballast, but, judging by the amount of bike tracks, this does not slow too many people down. The D&L Trail continues along the river through the Gap and south to Slatington, but I split off onto LGNC’s 3 Ponds Trail, a short loop trail that circles the Kittatinny Ponds area. 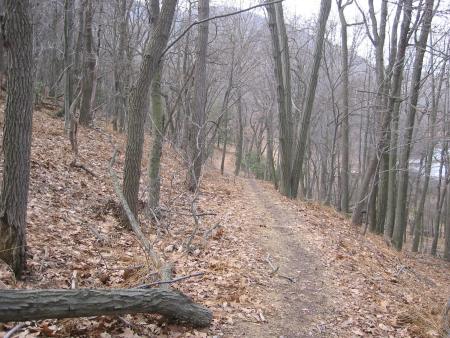 I traveled around Wood Duck Pond, startling birds and scattering minnows. A short side trail at the southern end of the ponds links to the LNE Trail, a ballast and cinder trail that follows the old grade of the Lehigh & New England Railroad, some 100 feet up the mountainside from the D&L Trail.  I walked east on the LNE Trail, hoping to take the Chestnut Oak Trail or Prairie Grass Loop up the side of the mountain. 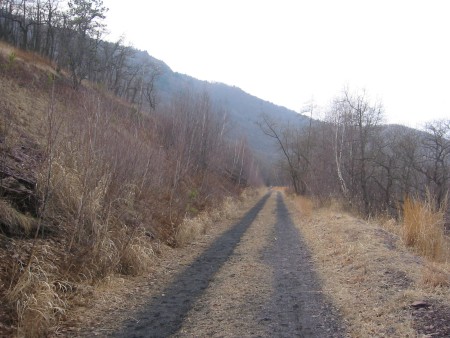 I must have missed the trails because I continued almost the whole way down to the Gap, passing the dormant Palmerton Zinc property across the river and eventually hitting the Bobolink Trail and the eastern end of Prairie Grass Loop. Here I took the Loop and finally started to gain elevation. This narrow footpath cuts through the large expanses of tall, warm season prairie grasses intended to revegetate the polluted slopes. At the top of the loop, I moved onto the Charcoal Trail, a rocky path that made its way east, quickly moving up the slope. After a good bit of huffing and puffing, I made it to the ridgeline, where the Charcoal Trail meets the Blue Trail, a side trail of the AT, located on National Park Service land. 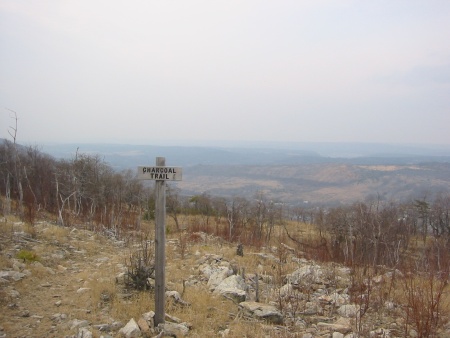 I walked for a bit on the Blue Trail, reaching the summit and walking west, away from the Gap until I reached the electrical transmission towers that hover above the turnpike tunnel. I could see my car parked at the boat launch, about a thousand feet below. I made my way back east to the gap, enjoying the horizontal walking, the cooling breeze, and the odd scenery. There is a striking difference between the southern, tree covered slope of the mountain and the treeless, scrublands of the northern slope. Even through the bare trees, it was difficult to get views of Lehigh County. On the other hand, I had a panoramic, if hazy, view of Carbon County’s rolling mountains. I found a rock chair that someone had built on the edge of the ridge and ate a snack, while watching mini tractor trailers move up and down Rt. 248 and hawks glide high above the river. 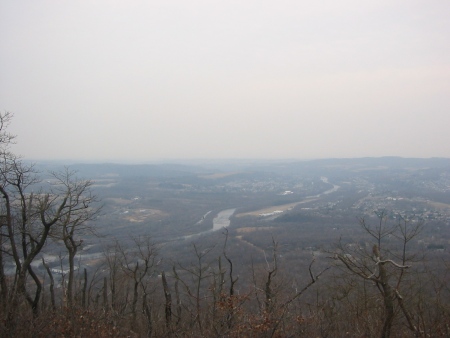 I spotted blue trail markings on the rocks leading past my chair and down to the Charcoal Trail. I briefly followed them until distracted by a sign for Devil’s Pulpit. I knew of Dan’s Pulpit, where the Blue Mountain Eagle Climbing Club had traditionally worshipped, and Pulpit Rock, both further to the west, but I was not familiar with the ironically-named Devil’s Pulpit. The sign pointed towards the steepest part of the Gap, northwest of but high above LGNC’s Osprey House. I began descending the trail, which really required slowly climbing down a pile of boulders until I hit the tree line. From there, I held onto trees and slid down the steep, somewhat muddy trail. The further I descended into the gap, the more I feared for my winter-softened body, which would inevitably have to turn around and climb back up. After five or ten minutes, I reached the pulpit, a rock formation that juts out from the mountainside and provides awesome views of the gap and the river. Great! I paused briefly, snapped a picture, and turned around to face my ascent. Long story short, I emerged from the tree line thirty-minutes later huffing and puffing and covered in mud. As a man recently of rail trails, I had forgotten how demanding mountain trails can be. 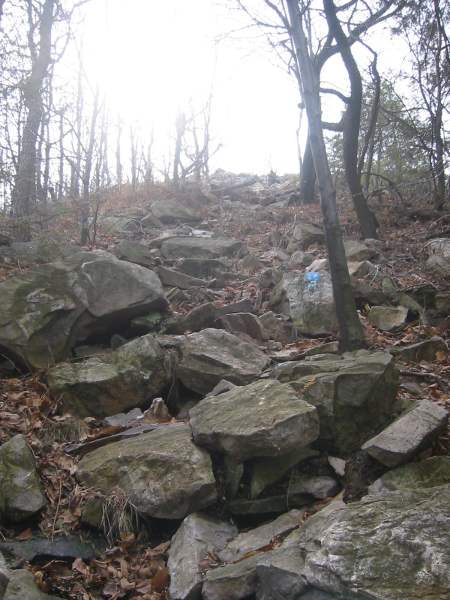 I followed the same route down the mountain, this time taking the western branch of Prairie Grass Loop to Chestnut Oak Trail and down to the LNE Trail. I am interested to know how often trail maintenance is conducted and what tools are used to trim the prairie grass because the vast majority of the trail was in very nice condition. When I reached the bottom of the mountain, I attempted to take the western trail loop around the three ponds but got confused and decided to backtrack to the D&L. By the time I reached my car, I was thoroughly pooped but content that I had taken full advantage of the day. 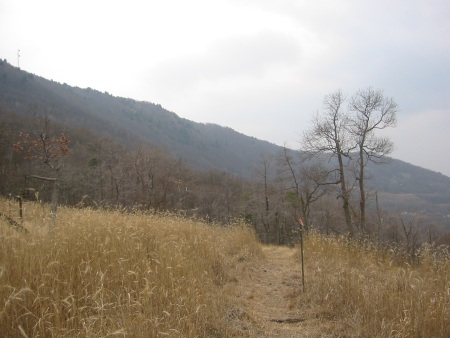 If you have not yet hiked the LGNC’s trails or are only familiar with the AT route to the summit, give the northern approach a try. My only reservation is that some of the newest trails are erratically blazed and lack clear, proper signage, but it still would seem almost impossible to get lost.  If you have young children, stick to the D&L, LNE, 3 Ponds, and maybe the Prairie Grass Loop trails. And, if you (like me) are considering using the hike to slowly and painlessly transition back into your spring and summer hiking routine (and level of fitness), you might think twice before descending to Devil’s Pulpit…

The Lehigh Gap Nature Center’s website includes a trail map and guide. Families might consider calling for hike recommendations. The National Park Service administers the Appalachian Trail and Blue Trail. The D&L Trail is a project of the Delaware and Lehigh National Heritage Corridor.