Patrick Brown’s new book Industrial Pioneers: Scranton, Pennsylvania and the Transformation of America, 1840-1902 is a much-needed study of a city that played a disproportionately formative role in nineteenth-century American industrial history. Scranton was at the center of iron rail production, anthracite coal mining, and steelmaking, and, at a time when electricity was a fantastic novelty, the pragmatic city began operating the first electric street car system in the nation. “Scranton was,” argues Brown, “the Silicon Valley of the nineteenth century (p.2).” Because Scranton was on the cutting edge of industrial innovation, it was also forced to deal with many modern problems, such as immigration, labor strife, and the myriad evils of rapid population growth. As Scranton struggled to come to terms with what it meant to be an industrial city, the nation watched and learned.  This book chronicles the many changes to Scranton’s people, industries, and landscape, providing interesting quotations and well-chosen historic photos along the way. 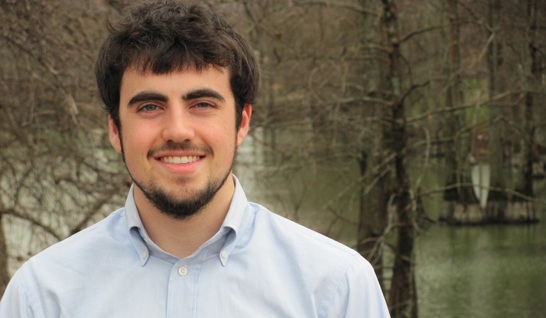 Patrick Brown is the author of a new industrial history of Scranton.

As an undergraduate at Georgetown University, Brown studied under Joseph McCartin, the well-known historian of the industrial democracy movement. McCartin’s influence is clear in the pages of Industrial Pioneers, the majority of which Brown wrote as a senior history thesis. In a sense, Brown frames his narrative as a declension from the independent village blacksmith and egalitarian society of the 1840s to the alienated and—despite the mixed successes of labor organizers—ethnically divided industrial workers of the late nineteenth century, who lived in a city disrupted by a transient population, capital mobility, and chaotic national markets. Within this generalized framework, however, Brown does justice to the many exceptions to the decline and presents a realistic vision of a city that has continuously “reinvented” itself. Perhaps this fair treatment of the period is why Brown was awarded Georgetown’s prestigious Morris Medal for the work.

Brown makes the interesting observation that Scranton continues to be a bellwether for the nation’s political climate—simply witness the attention focused on the city during the 2008 Presidential season. Just as Scranton was among the leaders of industrial innovation for much of the nineteenth century, it has become synonymous with deindustrialization in the late twentieth and early twenty-first centuries. Now, as Scranton struggles to reinvent itself once more, the work of Brown and other historians is more necessary than ever, so the mistakes of the past are not repeated.

I recently had the opportunity to ask Patrick Brown a few questions about his new book:

Silas Chamberlin: Is it easier or more difficult to write the history of the place where you live?

Patrick Brown: While I currently live in Mississippi, I was born in Scranton. My father’s side of the family comes from Scranton, and my roots in the city make Scranton’s rise even more interesting. Writing this book helped me to understand where I come from—I even stumbled on some family history in my research. My ancestor, John Reedy, was elected vice-president of a meeting held in 1877 to protest the conviction of the Irish Democratic Party leader, Frank Beamish (whom a political opponent labeled as, “a smaller edition of New York’s Boss Tweed”).

Silas: Does Scranton have a lot of good archival sources? If so, which sites did you visit? Did you need to go elsewhere for your material?

Patrick: I was extremely fortunate to have access to the Lackawanna Historical Society and the Albright Memorial Library in Scranton, both of which provided me with invaluable resources about the early history of the city. The Terence Powderly collection at Catholic University in Washington, D.C. also proved amazingly helpful. I benefited greatly from the fact that I conducted my research in 2009, because older histories of Scranton (Hitchcock, Throop, Logan and others) are now available for free through Google Books, and as a result are full-text searchable.

Silas: What was the most surprising thing you discovered in the course of your research?

Patrick: Before I began my research, I knew that Scranton housed many immigrant communities in the nineteenth century. I was shocked, however, by the extent to which foreign-born workers defined the city in its early years. The Hyde Park section of the city was a “mini-Wales” in which “Welsh postmen walked along Welsh-named streets to deliver letters from Wales to Welsh homes,” and ethnic tensions between Welsh, Irish, German, and British immigrants ran high. By 1854, fourteen years after the Scranton family arrived in the city and began producing iron, only 27 percent of Scranton’s residents were native-born Americans. The process of researching this book has put today’s immigration debate in perspective, and convinced me that America is a nation that constantly reinvents itself. It would be difficult for a thoughtful reader to get through “Industrial Pioneers” without constantly reflecting on the links between America’s transformation in the nineteenth century and the challenges we currently face in a rapidly-changing world.

Silas: You are now employed by Teach for America. Has a degree in history or your research on Scranton given you a unique perspective on difficult social issues or on American society in general?

Patrick: I teach 10th to 12th grade social studies at Greenville-Weston High School in the Mississippi Delta. The parallels between Scranton and the Delta are remarkable: both face the loss of manufacturing jobs and struggle to retain talented young people, and both have residents who retain an intense sense of place and care deeply about their communities. While Scranton’s industrial history shaped America in the nineteenth century, the civil rights struggles in the Delta shaped America in the twentieth century. I find that my understanding of Scranton’s complex social history has helped me begin to understand the equally complex history of the Mississippi Delta. More broadly, researching Scranton served to crystallize the basic idea that I try to communicate to my students: history tends to draw on itself, and that those who understand the past will define our world.

Silas: Finally, do you have any plans for future research?

Patrick: The history of the education system in the Mississippi Delta fascinates me, and Americans outside the Delta know very little about this part of the country. Stay tuned.