The Landmark Towns of Bucks County  – Morrisville, Yardley and New Hope  – presented their annual Community Achievement Awards to outstanding individuals at the annual Reception & Ceremony on Thursday, September 29, 2016 at historic Summerseat in Morrisville.

Each year the Awards recognize and honor the tremendous time, effort and personal commitment to connecting communities and trail along the Delaware Canal Towpath. 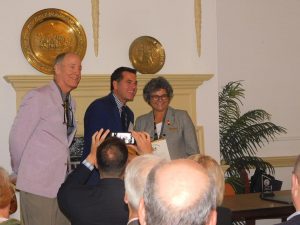 Two outstanding individuals were recognized for their years of support.  John Burke recently retired as New Hope’s Borough Manager.  He was founding chairman of the D&L’s regional revitalization initiative.  Until a recent transfer, Rick Dalton was Delaware Canal State Park Manager.  Landmark Towns name originated because the National Historic Landmark Delaware Canal links the cooperating communities.  Dalton exhibited outstanding leadership in the restoration the Canal after a series of damaging floods.  His daily work had a positive impact on all the towns and the region.

Steering Committee representatives also nominated four individuals who exemplify dedication and enthusiasm to improve life for everyone in their respective communities.

In Yardley, Tammy Marshall and Sue Schneck were recognized for volunteering on behalf of the Yardley Farmers’ Market.  Hal Wilcox was recognized for his commitment to the Mega Sports Camp in Morrisville as well as his leadership on combatting the region’s drug epidemic by building on a partnership with the local churches. Bob Egan was recognized for his years of work helping various New Hope community groups to maximize their fundraising as well as bringing quality musical talent to New Hope.