The following article by Christopher Baxter appeared in the October 23, 2008 issue of the Morning Call:

A blustery wind gave rise to falling leaves as Garry Hahn puffed his cigar and gazed upon the remains of Lock No. 44 on the Lehigh Canal in Freemansburg. 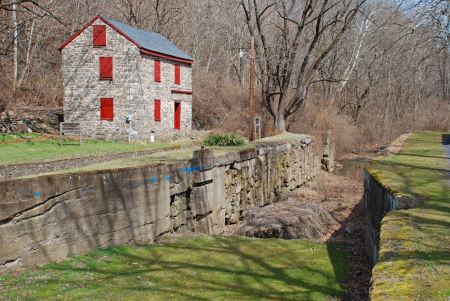 His great-grandfather Henry took the job of locktender in the 1880s and moved into the modest stone house alongside the canal. And for the next 60 years, he and his son Walter faithfully kept lookout as the waters rose and fell with each passing boat.

But no one was watching over Henry’s grave site when vandals struck two years ago. And when the local cemetery association could not afford the repairs, Garry Hahn made the trek with his family to resurrect the headstone shared by his great-grandparents, Henry and Ellimina.

The 46-mile Lehigh Canal opened in 1829 after two years of laborious digging. Measuring 60 feet across and an average 9 feet deep, it stretches from Jim Thorpe to Easton.

Nearly everyone in the canal town knew the man in charge of Lock No. 44; some for his generosity, some for his work ethic, but all for his burly physique and fiery red hair.

”It was a hard life, and Henry was a hard worker,” said Charlie Derr, a retired park ranger and expert on the canal corridor.

By all accounts it was a family effort. The women would bake fresh bread and pies, some to sell to canalmen, and the young men would help tie off the boats before flooding or draining the lock. In between his work at the canal, Henry would chop wood and run a small store to make money on the side.

Yet, as permanent as the ebb and flow of the water seemed, life along the canal was changing. 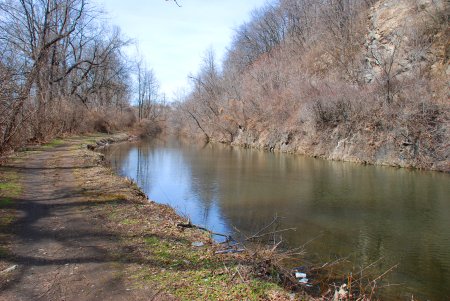 Steam railroads built in the late 1850s were slowly making the canal obsolete. Walter Hahn, previously the constable of Freemansburg, tended the lock during Henry’s later years before taking over permanently upon his death in May 1921, Garry Hahn said.

But his grandfather never talked much about life on the canal, Hahn said. In 1937, one of Walter’s 10 children, 17-year-old Leonard, fell into the lock and drowned.

”I think he really disavowed himself from this place,” Garry said. ”My grandmother told me he was never the same.”

It was ultimately the passing of years and family members that shifted the Hahns’ presence in Freemansburg from the locktender’s house to a cemetery up the hill.

Henry, Walter and Garry Hahn’s father, Maynard, all attended the former Trinity Reformed Church on Main Street, and one by one they were buried a few blocks away in Union Cemetery.
View Larger Map

Like Lock No. 44, their final resting place looks much different these days. Older homes bound the cemetery to the east, and new townhouses loom to the west.

Yet even with the surrounding development, nobody saw the two teenagers who toppled more than 100 headstones, including the Hahns’, one cold January night in 2006.

The board overseeing the cemetery spent $10,000 to prop up the stones, but they did not have the money to permanently reset them in their bases, said Derr, treasurer for the Union Cemetery Association of Freemansburg.

But allowing Henry and Ellimina’s to be anything but perfect, among the numerous Hahns who lie there, was an insult to his legacy, Garry Hahn said.

So two weeks ago, he drove north from Philadelphia with his wife, Donna, his son Vince and a hoist that Garry Hahn borrowed from a friend.

They poured a new base of concrete, and using a few boards, levered the stone back into place.

”Neither of us really knew how to do any of this,” said Garry Hahn, standing by the stone Tuesday morning before visiting the lock. ”But we had to do it. Something just didn’t feel right, you know?”

His comfort in the centuries-old cemetery was evident. He stood atop the freshly cut grass, pointing out family members and telling their stories. He smiled: ”This is home now.”

Someday he will join them on a small plot a few rows away, he said. He was not the locktender or the local constable, but he is a Hahn, and for that, he said, he is proud.