Those of you who frequent the Freemansburg section of the D&L Trail have probably noticed the new observation deck, constructed as part of Jonathan Yu’s Eagle Scout project. The new deck is located along the canal towpath and offers scenic views of the Lehigh River, as well as the remains of a historic structure in the river. These remains—what little is left of an old “bear trap” dam—are the subject of a new interpretive sign recently installed at the deck. The sign was designed and written by D&L Outreach Coordinator Dennis Scholl and installed as part of a November 20 Trail Tenders outing.

Jonathan’s observation deck and the new sign are nice additions to a section that will also see improvements to the trail surface in the next year or so.

A “bear trap” dam? For anyone unfamiliar with the term, the text of the sign is posted below. 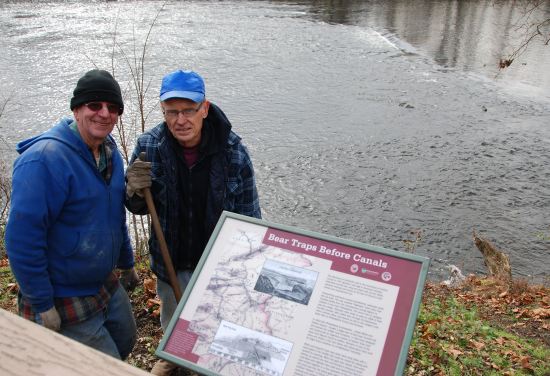 The discovery of anthracite coal in the mountains of Carbon County in 1791 ignited a new age in American industry. Anthracite burned hot, long and clean and, by the 1820s, replaced charcoal and wood as the fuel of choice to heat homes and manufacture iron.

Transporting anthracite proved troublesome; adequate roads did not exist. The only suitable “highways” were rivers that tumbled swiftly from the mountainous mining regions to markets in and near Philadelphia. The worst river to navigate was the Lehigh. Attempts were made as early as 1806 to float box-like wooden rafts, called arks, through its treacherous, rocky currents. More coal wound up lost in the Lehigh’s cold water than in Philadelphia stoves and furnaces.

In 1818 two Philadelphia businessmen – Josiah White and Erskine Hazard – bought a large tract of land near Summit Hill and opened the Lehigh Coal Company. In 1819 they designed and constructed an ingenious system of twelve “bear trap” dams from Mauch Chunk to Easton. Remains of one of the dams are visible in the river below this observation deck built by Eagle Scout Jonathan Yu of Bethlehem Township.

White and Hazard’s bear trap dams were wing dams with a sluice gate in the middle that could be closed by raising and opened by lowering. When the gate was closed, river water backed up behind the dam and formed a temporary pond. Coal-filled arks eighteen feet wide and twenty-five feet long were linked together in a line upstream of the dam. When the pond was full, the sluice gate was lowered, creating an artificial “freshet,” or flood, that swept through the sluice opening and carried the arks downstream. The process was repeated at dams downriver until the arks finally reached the deeper, wider, Delaware River in Easton.

White and Hazard’s one-way bear trap system operated until 1826, when 31,280 tons of coal floated down the Lehigh River. In 1827, the two men began constructing the Lehigh Canal, a two-way transportation system that opened in 1829.