Over the last few weeks, I [D&L Intern, Silas Chamberlin] have been out and about with Scott Everett, the D&L Trail Steward, installing new signage at various sites throughout Lehigh and Northampton Counties. The value in working as an intern is seeing both sides of operating a non-profit: the tedious and seemingly endless prep work that goes into sign fabrication, land easement negotiations, and economic impact studies and the fulfilling yet painfully ephemeral moments of public recognition and appreciation for the work of the organization. 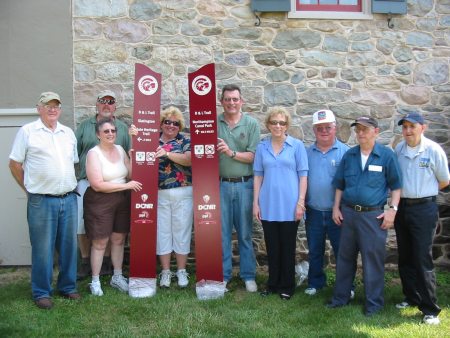 The D&L’s new directional blades are a good example. The groundwork for these signs was laid over a decade ago when the organization implemented Visually Speaking, a design package that provided uniform standards for all D&L signage projects, including the ubiquitous interpretive waysides that are found at many sites along the Corridor. Contained within this document was section “SG.5.25: Signage” that described “Directional Posts.” 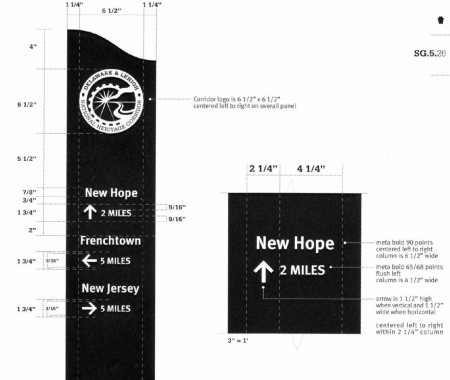 The description seemed simple enough: “Directional posts are placed along the trail to indicate direction and distance to locations and sites.” Okay, makes sense. “Trail partner logos are also located on this sign.” Sure, our partners need recognition. “Drill and countersink holes for ¼-20 flat head bolts…weld ½” x ¾”…drill and tap…finish to weather…P2-Matthews LS-52894 Satin…” Eh, details that a sign manufacturer can deal with later. 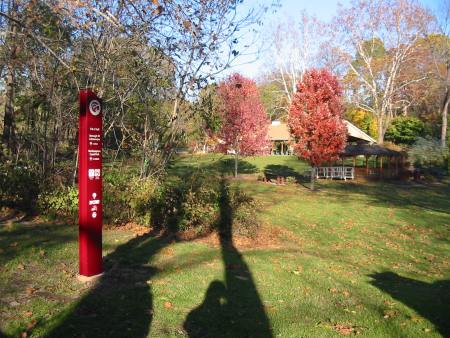 At the time, the D&L Trail was still very much under construction, and it was not until late in 2007 that installing “Directional Posts,” now referred to by the more-impressive, vaguely-militaristic term “Blades,” made sense. To make a long and (to anyone outside of the sign or trail world) boring story short, deciding where to locate the blades, determining the distances, direction of arrows, and sites to include, gathering written consent from our partners, acquiring those “trail partner logos” in the proper file format, and installing those countersunk, drilled holes without messing up the LS-52894 Satin proved to be a Herculean task that was not completed until summer 2008. Through a lot of effort, we managed to install a handful of the blades in time for National Trails Day (coincidentally a 95 degree, June day that kept many would-be supporters from attending the unveilings). 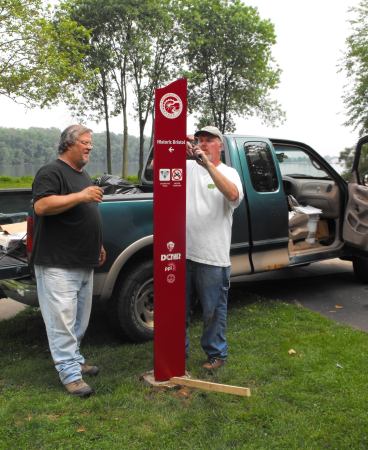 Over the rest of the summer we installed a blade here or there, trying not to waste valuable time or gas driving across the 165-mile Corridor. Finally, I am happy to report, the large stack of blades that was once stockpiled in our office (and that, manual labor flowing downhill, I had helped move several times) has now dwindled to two. One is for the Forks of the Delaware, a site that is currently under construction to repair flood damage. The other is for Wy Hit Tuk Park. Someone ran over the cement base, forcing us to hold off on that one for now. 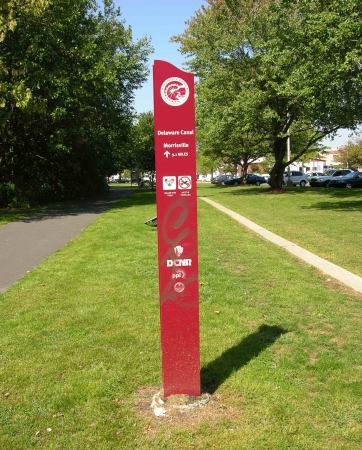 So, that is the “tedious and seemingly endless prep work.” I can’t really complain. In fact, I’d really like to brag. Working on that project and our related effort to install mile-markers along the trail has allowed me to get to know parts of the Corridor quite well, sometimes by walking long stretches of the trail armed with a GPS unit and a surveying wheel. More pragmatically, I’ve come to understand that, for better or worse, creating and improving outdoor recreation infrastructure is often an indoor activity, making moments on the trail that much more meaningful. 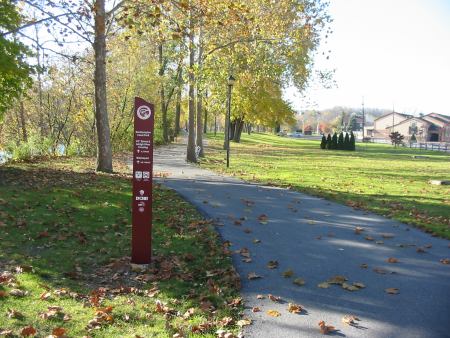 The fleeting yet very real sense of accomplishment that I referred to in opening comes when a trail user mentions how happy they are to have the new sign, to measure how far they are walking or riding, or to learn what the park or trail is called. They may not know what the Delaware and Lehigh National Heritage Corridor is or that they are walking on the D&L Trail, but that type of recognition will come with time and with other projects. For now, enjoy those blades and, for my sake, please treat them well.