On the Trail in Walnutport and Slatington

Posted in On the Trail

Many residents of Slatington and Walnutport already know how lucky they are to have the Walnutport Canal and the D&L Trail run through their communities. The Walnutport Canal Association maintains the towpath from the dilapidated aqueduct on Bertsch Creek to the termination of the canal some four miles north, in the shadow of the Lehigh Gap. The portion south of the Main Street Bridge is heavily used by joggers, fishermen and bicyclists, but is very well maintained. On the day I walked the towpath, large trout, bluegills, and turtles were everywhere, and, in the large pool north of Bertsch Creek, there was a muskrat gathering grass. 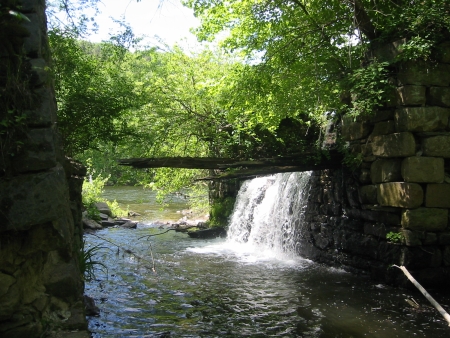 The section of towpath north of the bridge is also popular, although the last mile or so is less crowded because the path dead ends and it is necessary to backtrack. Still, the short walk to the end of the canal is worth the trip. The water level in the canal slowly lowers until it resembles a small stream, and the thick brush gives the illusion of isolation (Rt. 145 is not far off in the woods). Most interesting of all, the barren, rocky slopes of the Lehigh Gap, juxtaposed with the short trees gives the last quarter mile of the towpath a look reminiscent of western landscapes. Fortunately, this will be a fleeting illusion, as reseeding of the mountain is well underway. 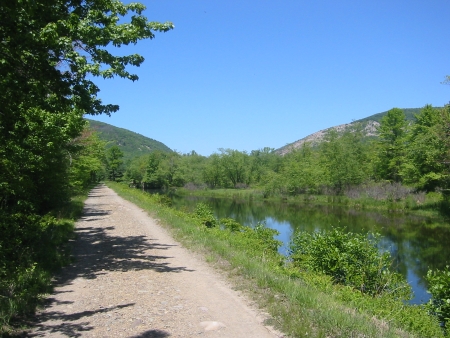 On the west side of the Lehigh River, another section of the D&L Trail follows the old rail bed from Trout Run to the East Penn Boat Launch in Carbon County. This is a secluded section with amazing views of Lehigh Gap and the river. The parking lots in Slatington and East Penn would allow for a nice car-to-car hike. 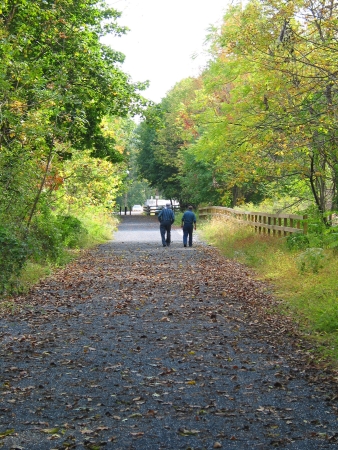 [A stretch of the D&L Trail in Slatington]