Sneak Peek At Our New Exhibit, Dixie: Easton’s Cup of Health and Happiness

It’s probably the most persuasive advertising phrase in our language. But did you know that one of the earliest adopters of that approach to marketing—and to children, no less—was Easton’s iconic industry, Dixie Cup? That’s just one of the things visitors will learn from “Dixie: Easton’s Cup of Health and Happiness” a multi-media exhibit at the National Canal Museum this summer. 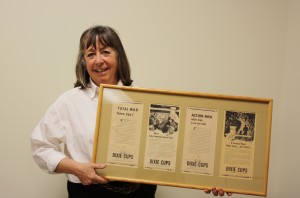 The exhibit, drawn from the museum’s collection as well as the Hugh Moore Dixie Cup Collection at the Skillman Library of Lafayette College, traces the history of Dixie Cup from its birth during the Progressive campaign against the germ-ridden common drinking cup in the early 20th century through its adoption by the U.S. and eventually, the world. Advertisements, photographs, video, and of course, actual vintage cups, will show visitors how Dixie’s founder, Hugh Moore thoroughly instilled his innovative attitudes and marketing genius into his staff and workers.  Together, they turned the simple disposable paper cup into a versatile and ubiquitous part of American life.

Moore and his people realized early on that promoting health and preventing disease was not the only way to sell their cups—and cups were not the only thing they could make and sell.  When Prohibition made soda fountains the go-to refreshment place for many people, they expanded to make all sorts of cups, cones, and paper serving pieces for drinks and treats. With elegant classic designs printed on their cups, plates, napkins, and tablecloths made of paper, they lured women who entertained at home to leave their linen and china in the closet. In the car-crazy post-World War II years, they persuaded gas stations to sell packaged cups to travelers as a safe, disposable way to quench their thirst on the road.  And for the harried mothers of the Baby Boomers in the 1950s, they put cups and easily-installed home dispensers on supermarket shelves so their kids could safely serve themselves and moms would not have glasses to wash over and over. 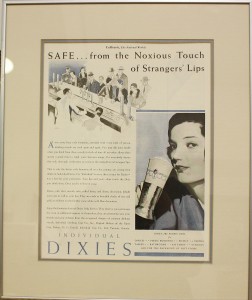 Moore’s genius and dedication made him a wealthy man.  His later years were devoted to his interests in international affairs—he was a strong supporter of the United Nations and actually tried to get it headquartered in Easton—population control, and philanthropy.  In 1962, he gave the city of Easton the money to buy what is now Hugh Moore Park and its restored section of the Lehigh Canal from the Lehigh Coal and Navigation Company in order to preserve part of that historic transportation network and the site of America’s first industrial park, the Abbott Street area at Lock 47.

But nearly 40 years earlier, Moore had hitched Dixie to a new medium—radio—and an untapped audience—children.  “The Dixies Circus” weekly show featured twenty-five animal characters, each with their own voice and personality. Each was also pictured on the underside of the lid of Ice Cream Dixies, individual cups of ice cream that were one of the first foods promoted to kids and for kids as a way to make them happy.  After accumulating a certain number of lids, listeners could trade them in for a larger picture of their favorite character.  Eat enough Ice Cream Dixies, and a kid could not only collect them all, but an actual cardboard circus set of all the characters. 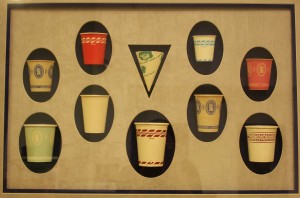 Today, the circus sets are rare, but Dixie Cup had made life-long customers and an enduring brand.

“Dixie: Easton’s Cup of Health and Happiness” will open to the public at the National Canal Museum on June 11. The exhibit is supported by a grant from Georgia-Pacific Corporation. We also thank Diane Shaw and Pamela Murray of Lafayette College’s Skillman Library for their generous and enthusiastic cooperation. The National Canal Museum is an affiliate of the Delaware & Lehigh National Heritage Corridor.