Posted in Tales of the Towpath

The popular children’s storybook “Tales of the Towpath” has been released in audiobook version as a teaching tool for low-level readers, visually-impaired students, and English as a Second Language (ESL) students taking part in the Delaware & Lehigh National Heritage Corridor’s Tales of 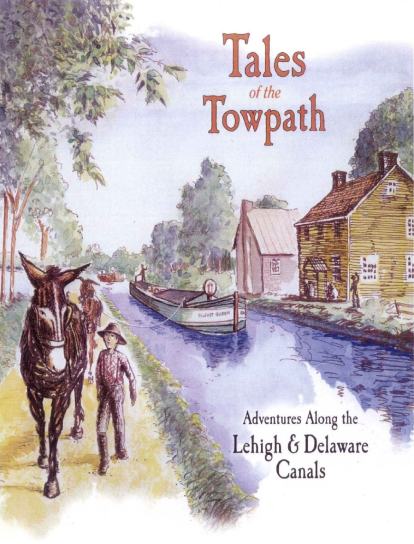 the Towpath curriculum. The curriculum is being taught to fourth- and fifth-grade students in 57 public, private, parochial and charter schools in Lehigh, Northampton, Bucks, Carbon and Luzerne counties.

The audio book was produced by Touchstone Theater of Bethlehem. Bill George, a Touchstone co-founder, narrates the 24-chapter audiobook, providing the voices of the book’s protagonist, Finn Gorman, and other book characters. Direction, recording and sound design was done by Touchstone Producer, JP Jordan. The project was funded through a grant from the Lehigh Valley Community Foundation.

“Tales of the Towpath” was written by D&L Outreach Coordinator, Dennis Scholl, and is the focal point of a state-approved, standardized elementary school curriculum that introduces students to life in eastern Pennsylvania in the 1850s, when anthracite coal mined in Carbon and Luzerne counties was fueling unbridled industrial growth along the Lehigh and Delaware canals. Finn Gorman’s adventures introduce readers to communities and industries along the canals and the people who lived and worked in them. The storybook is available at local bookstores and the D&L’s online store. The audiobook is available only to participating schools but will be available by download on the D&L website early next year.