Ilse Stoll and Cindy Kerschner have never met, yet they have many things in common. Both are wild about native plants and can rattle off their Latin names quicker than Cicero could malign a political foe. Both are community-minded and enjoy getting involved with good causes. Each loves outdoor work and is not afraid to get dirty.

Best of all, especially from the D&L’s perspective, both are Trail Tenders who have assumed the responsibility of transforming trailside jungles of invasive plants into naturalized gardens of Eden for public enjoyment.

Ilse oversees work at the Trail Tenders’ two-acre Sand Island Native Plant Preserve near her residence in Bethlehem. Cindy, a Lehigh County resident, is beautifying the D&L Trail’s Cementon Trailhead, which offered little in the way of eye-popping aesthetics before she got involved. 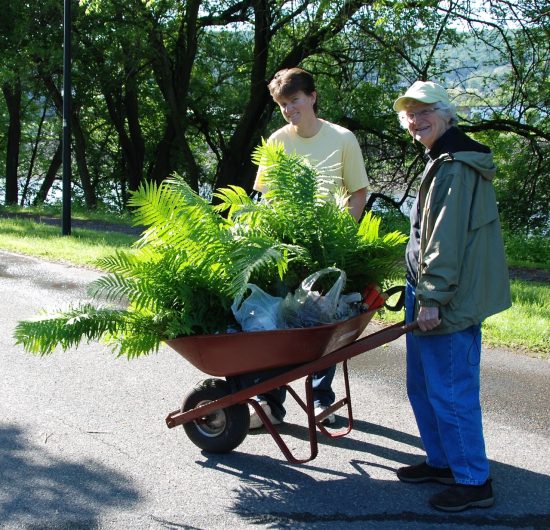 Ilse Stoll (right) and a friend head to the SINPP with a load of ferns.

The enthusiasm of the two volunteer “Plant Ladies” has been contagious. Ilse has recruited a dedicated following and conducts weekly weeding parties that attract others who enjoy gardening on a grand scale. Cindy’s well-designed and organized efforts have caught the attention of neighbors, who have offered physical help, tool storage, and water for thirsty plants and workers.

“I get a lot of ‘Looks nice, looks great’ comments when I’m working there,” says Cindy, a member of the Penn State University Master Gardener program. “The neighborhood, for the most part, is excited about the trail.”

Ilse also receives compliments at Sand Island, and sometimes recruits the well-wishers on the spot. “I had a man tell me what a nice job we were doing, so I said we need some help today,” Ilse recalls of a chance meeting with a trail user. “I put him to work and he stayed an hour. Why not?” 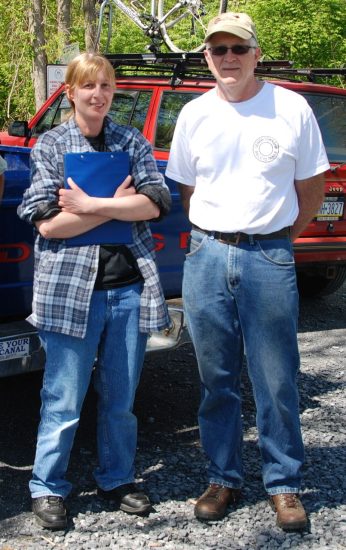 The Plant Ladies and their helpers fill a void at Trail Tenders projects where invasive vegetation is removed. A lot of Trail Tenders enjoy removing invasive trees and shrubs and vines, but they’d rather not be bothered with the delicate, patient job of replacing the aliens with natives and the summer-long job of weeding. For Ilse and Cindy, it’s second nature.

“You need to love what you’re doing so it doesn’t become a chore,” Cindy says. “And it’s not like work when you do the job with a great bunch of people.”

“People love what we do,” Ilse adds. “They stop and talk as they smell the new native flowers. “They thank us all the time as we are on our hands and knees weeding.”

Ilse has hosted the Mayor of Bethlehem, John Callahan, at the Sand Island site, and promoted the preserve as a candidate for the National Wildlife Federation’s Backyard Habitat program. Cindy’s tenure as the D&L’s Lehigh County Plant Lady has only begun this year, but she already has plans to expand to other portions of the D&L Trail where the beauty of native wildflowers is needed.

“I use the trails and I believe in paying forward so others can enjoy the trails in the future,” she points out. “It is nice to see that the D&L is very organized and committed to their cause. The volunteers go the extra mile to protect and preserve the Corridor.”