The historic Inn at Jim Thorpe is one of the town’s landmark properties. With its grand cast iron balcony, comfortable guest rooms with a mix of Victorian and modern furnishings, and elegant suites with a whirlpool or soaking tub or fireplace, stepping into the Inn is a bit like walking back in time.

When you set foot outside the door of this Trail Friendly Business, you step into the heart of one of America’s most historic and picturesque towns. Dozens of charming shops line Broadway and Race Street, there’s always live music at the original Mauch Chunk Opera House, and you’ll want to linger at the Broadway Grille for an after-dinner drink or dessert. 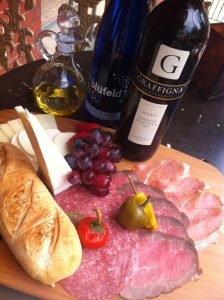 Outdoor recreation is an important part of life around town in Jim Thorpe, and the D&L Trail is walking or biking distance from the Inn. Their Bike & Stay Packages cannot be beat, which includes a 2-night stay, equipment, shuttle, dinner and breakfast voucher for the Broadway Grille. There are hundreds of miles of mountain biking, hiking, and cross-country ski trails, fun whitewater rafting and kayaking on the Lehigh River, miles of rolling hills and challenging terrain for road biking, and several downhill ski areas a short drive away. 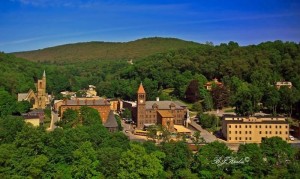 Built in 1849, the building has a rich and colorful history. In 1833, Cornelius Connor built the White Swan Hotel to accommodate the thousands of Mauch Chunk’s visitors to the town during its era as a booming coal transportation hub, but in the great fire of 1849, the White Swan burned to the ground. Connor rebuilt the hotel and the new structure was renamed the New American Hotel. This hotel was the social center of the town during the 19th century and into the 20th century. Many dignitaries stayed here, including General Ulysses S. Grant, President William Taft, Buffalo Bill, Thomas Edison, and John D. Rockefeller.

The Inn fell into disrepair during the Depression, as many coal towns suffered during the economic downturn. It was restored to its original splendor by John Drury, whose past restoration projects include the Chestnut Hill Hotel near Philadelphia. The Inn’s restoration, which began when Drury purchased the Inn in 1988, served as one of the major catalysts in Jim Thorpe’s exciting revitalization during the 1980s.

Whether you are an avid cyclist, a history buff, a musician or artist, the Inn at Jim Thorpe is one place to add to your bucket list.

The Inn at Jim Thorpe