Posted in Along the D&L Trail, Events, On the Trail, Trails

If you signed up for an organized run or walk taking place between March and May, you’ve likely already received some disappointing news: due to the COVID-19 outbreak, it’s no longer happening. Grave warnings from the CDC about the dangers of public gatherings during the pandemic have forced many race organizers to cancel or postpone. Thankfully, there’s a third option that many are embracing: going virtual.

Virtual races, which are emerging for distances from 5K to 50K and beyond, allow participants to complete a challenge on their own time and in their chosen location. Most operate on the honor system, asking participants to use fitness trackers and input their own times on the event website. Race swag is sent via snail mail. 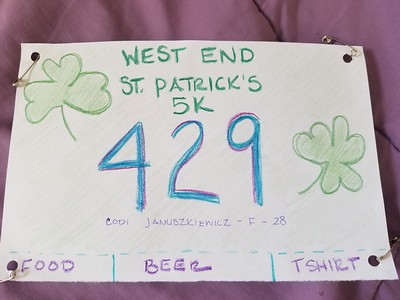 While it is difficult to replicate the group dynamic and excitement of a traditional race, participants are finding that the virtual format can still go a long way toward preserving the spirit and sense of accomplishment that attracts people to racing events.

D&L Board Chair Michael Drabenstott is race director of the West End St. Patrick’s Day 5K, which this year went virtual for the first time. The organizers learned that the race would have to be cancelled a mere nine days before it was scheduled to occur. They took a weekend to weigh their options. Because race proceeds benefit charity, refunding entrance fees wasn’t an option. Moreover, because the 5K has become a beloved community event, it seemed a shame to cancel it altogether.

“Our race has so much spirit and festivity,” Drabenstott says, noting that participants go all out with wearing green attire, often running with family and friends. “We thought, let’s not have this work go to waste.”

They decided that the race would go on, just in a different way. Ultimately, he says, running the event virtually was no more labor intensive than running the original event. Participants were given a window of Thursday through Sunday to complete the event and upload their times on the race site. This allowed for flexibility and served as a built-in method of social distancing, a precaution emphasized by the organizers.

Of the 813 people registered for the 5K, 270 ended up participating virtually. Entrants were encouraged to post pictures of their event for an online gallery, and the organizers were overjoyed at the response. The gallery was flooded with photos of shamrock-bedecked runners and walkers on local trails, in their neighborhoods, and on treadmills. A few even chimed in from out-of-state locales such as the Kentucky-Ohio border! 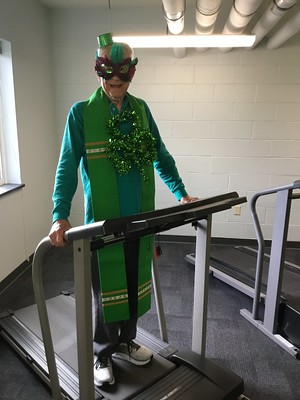 Runners get creative with attire and venue

“It was really heartwarming to see how people were getting into the spirit,” Drabenstott says.

While the photo galleries are always an event highlight, he notes that pictures in the 2020 gallery display a new level of creativity and solidarity. Some runners even crafted their own t-shirts and bibs for the event.

Bernadette Eckhart agrees that keeping up with your community is key to getting the most out of a virtual event. After she and Tammy Boyd Miller learned that the half-marathons they’d signed up for had both been canceled, they began searching for virtual events. They found the AllState Hot Chocolate 5/15K, planned to take place in Philadelphia, which had now gone virtual and offered a distance that approximated that of their training runs. Participants can run the event through the end of April, but she and her friend knocked it out in March.

When Eckhart began running in 2014, she had trouble running a single mile. Everything changed when she joined the St. Luke’s “Women Move for Health” group and found camaraderie with other women runners. Today, with over twenty races—including marathons and triathlons—under her belt, she’s filled with gratitude for this group.

“I’ve never felt so encouraged in my entire life,” she says.

Eckhart likewise found encouragement on the D&L trail between Cementon and Slatington, where she and Miller opted to run their 15K. This trail portion proved perfect because of its generous width, which allowed them to maintain social distance but still run alongside each other. 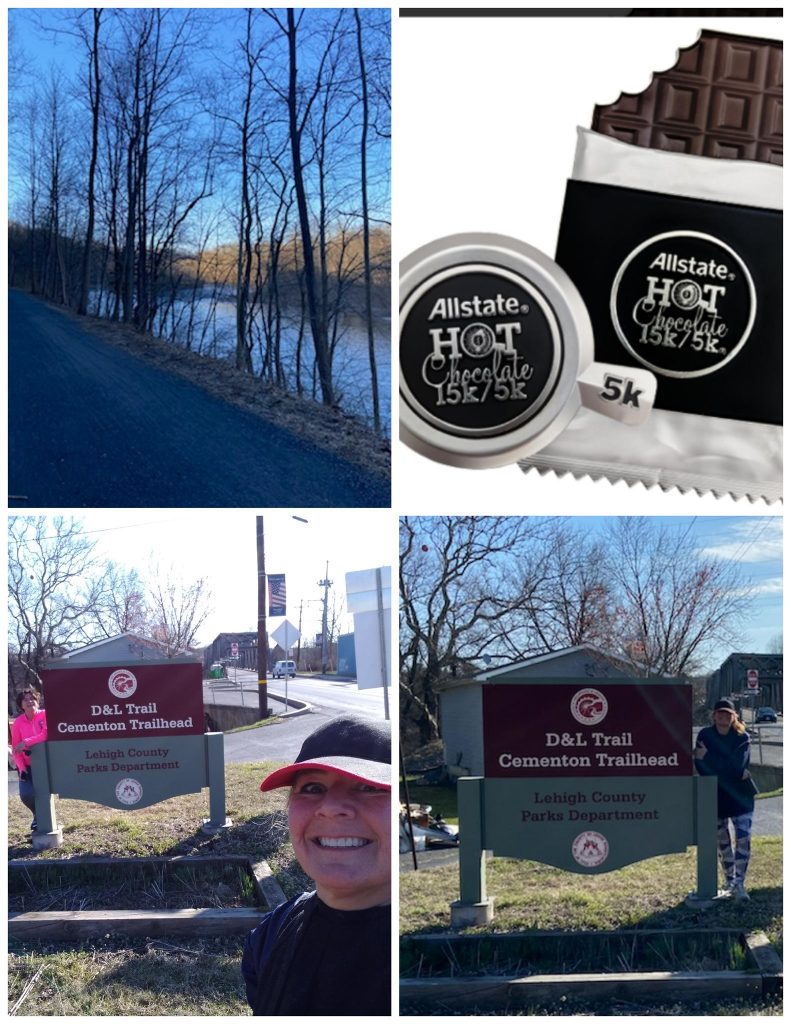 “While on the trail, people could tell we were pushing each other. People clapped for us—it was so great,” she says.

One of her favorite pieces of advice about running is that “the race is just your victory lap,” less important than the months of training beforehand. Still, it was rewarding to see that trailgoers recognized they were not just out for a regular weekend jog.

A Lehigh Valley resident for 20 years, Eckhart finds great solace in running the D&L Trail, in part because of the community she finds there.

“It’s always a great idea to go to a trail if you want to be around happy people who are conscientious of their health,” she says. “We’re so lucky to have this open space.”

Eckhart also enjoys connecting with her running community on social media, encouraging them to participate in events and sharing running playlists.

“Get connected with people who are doing virtual races,” she says, noting that many running websites have forums where people post virtual events. Just because you can’t run with a group, “you’re not alone.” 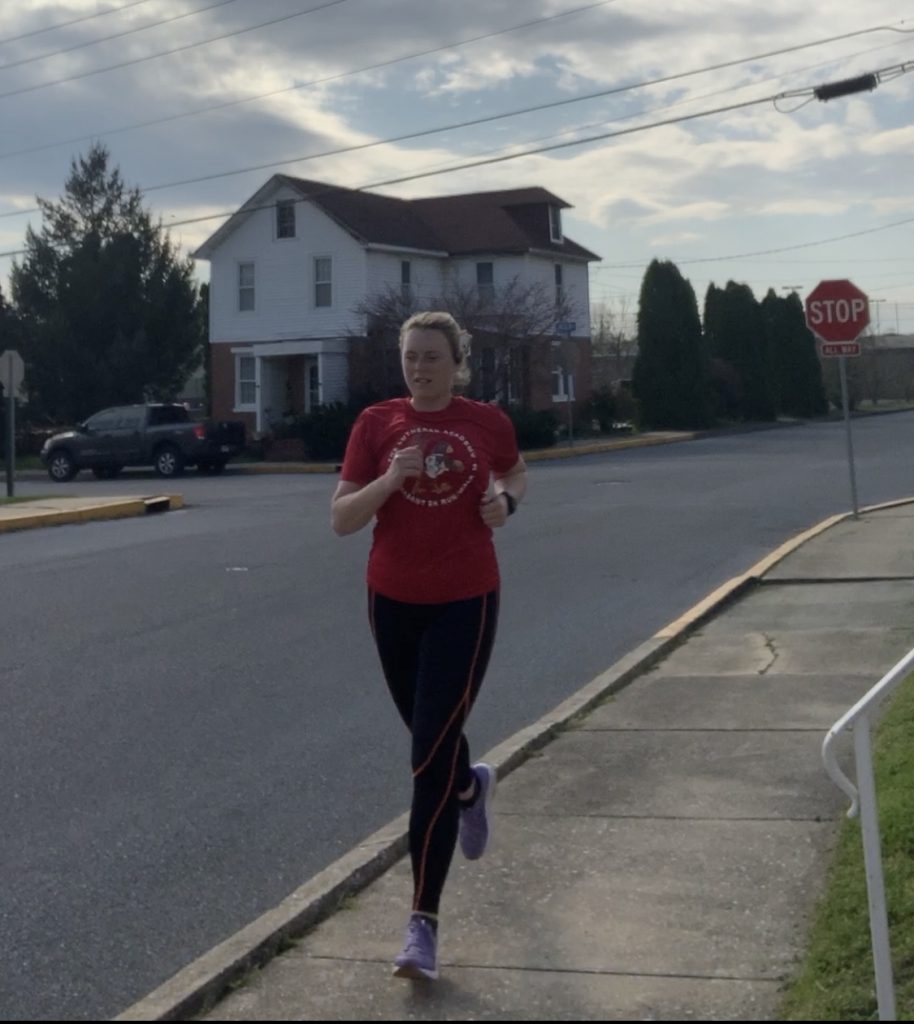 Lacey Timony keeps up with her training regimen through virtual races

Lacey Timony plans to connect online with others who signed up to run the Pittsburgh marathon this May and are now running virtually. She admits to being “kind of heartbroken” when it was canceled: she’d been training hard with her running coach, and had hoped to earn a personal best. Although both the full and half marathon went virtual, she chose the half because she didn’t feel prepared to run a full marathon without support.

As a result of the change in venue and length, Timony has decreased her mileage and is instead working on speed. She still enjoys her training runs in Harrisburg and Jim Thorpe, but admits that sometimes it can be difficult to keep up her motivation.

“It’s a solemn time for everybody. I’m upset about my run. I love to watch the London marathon, with people crushing world records. Even as a spectator, that’s been taken from us.”

To put the wind back in her sails when motivation flags, Timony keeps her eyes on the prize of future racing events.

If you realize you won’t be able to reach some of your racing goals for 2020, she says, “crush them even more in 2021.” She tells herself, “I can come back next year and do even better.” 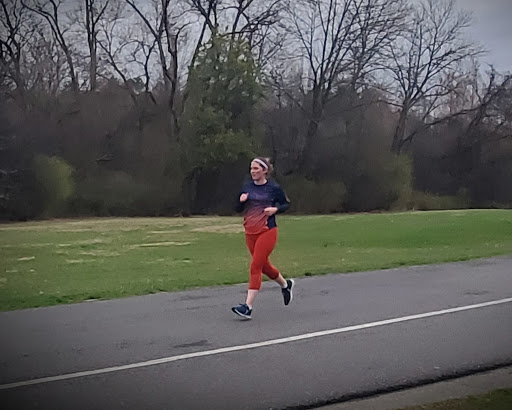 Kristen Smith also tries to stay focused on the root of her running motivation when signing up for virtual events. She recently ran a virtual 5K sponsored by a group called Moon Joggers, choosing Trexler Municipal Park as her location. To inspire her run, she remembered the buddy she was linked with through the organization I Run 4, which links runners with individuals with special needs and their family members. When all of her races had been cancelled, she needed only think of her friend Madeline to keep putting one foot in front of the other.

Smith is dedicated to pursuing her fitness and wellness goals as well.

“We’re training to better ourselves,” she says. “We can’t forget about that.”

She notes that on top of maintaining her hard-won progress as a runner, she needs the exercise as an outlet for stress relief. 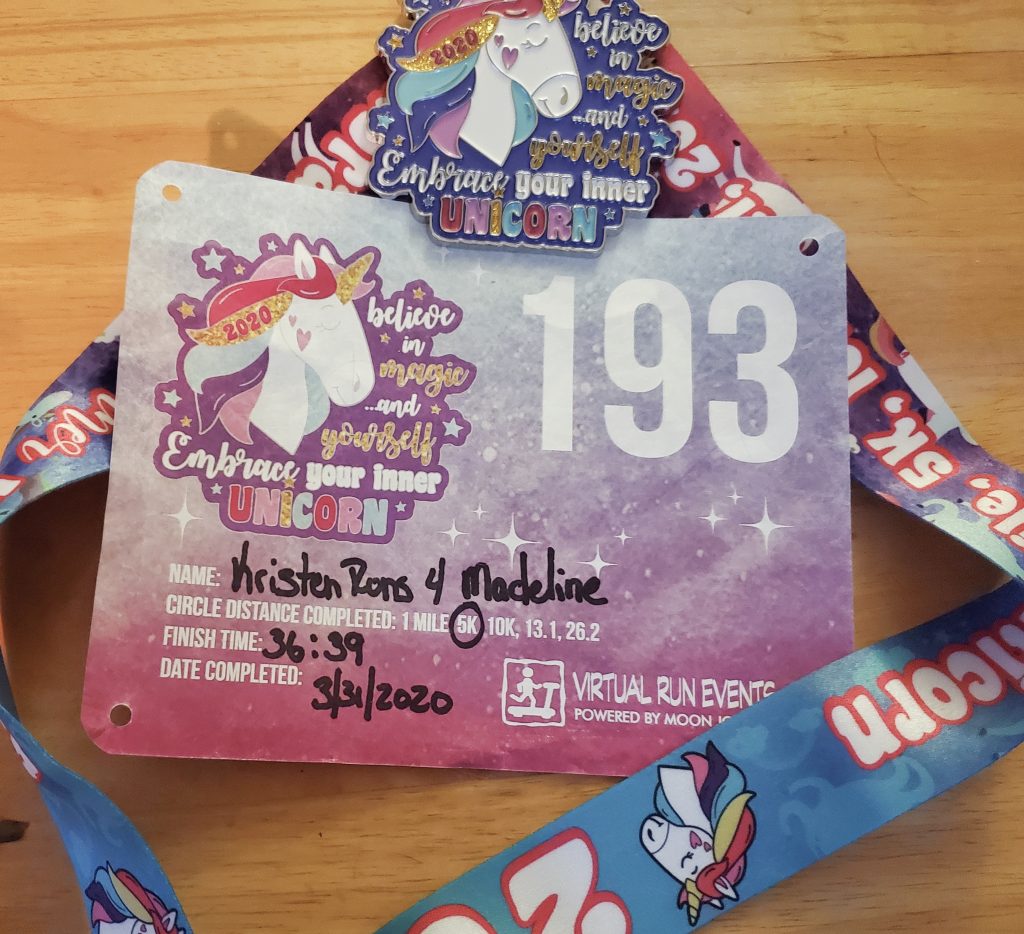 Another necessary pivot for training and racing virtually, Smith points out, is switching up your routine from time to time. She has begun training primarily in her neighborhood after finding that her favorite trails were becoming overly crowded. Finding areas where social distance isn’t a constant concern alleviates anxiety and helps her focus on the racing itself.

Maintaining race rituals as much as possible is important to Jennifer Trumbore as she prepares for her first virtual race. She plans to run the Hot Chocolate 15K, her first run of this length, later in April. She has already received her race packet, but she will not allow herself to don the comfy-looking hoodie it includes until she crosses her self-designated finish line. Her husband has agreed to present her with her medal when she returns home, and she plans to share her time and pictures with others who are participating via a Facebook runner’s group.

Trumbore sees virtual racing as more than a substitute for group racing, noting, “it’s a challenge to push myself a little extra to learn about my ability to achieve my goal.” She says that the self-discipline runners share comes in handy when they are forced to change their expectations about an event.

“For anyone who has a virtual option, if you’re looking for a challenge, that’s still there. It’s not just an everyday training run.”

As Eckhart points out, runners are by nature well conditioned to adapt and endure.

“If you stay positive and focused, we’re going to get there. You have to constantly change—a strong mental attitude is essential with endurance racing,” she notes.

Equally important, she notes, is staying healthy and fit during this stressful time, a purpose for which virtual races are well designed.

Drabenstott affirms that virtual races are a terrific option for the running community in a time when people are looking for ways to maintain their fitness level safely and connect with their community.

“Don’t discount the enthusiasm of the running community to support their event and make the best of everything,” he says.

Interested in giving virtual racing a shot? Check your favorite running websites and social media pages to see what events are coming up in the next few months. If you’d like to support the healthcare industry to thank them for their heroic work during COVID-19 crisis, consider signing up for Run Lehigh Valley’s Run for Good, which raises funds to provide meals for healthcare workers.

LVG Mini Grants at work on the D&L Trail
Earth Day at 50: 3 Ways to Keep Celebrating