The night began with a gathering of about 30 community members in St. Michael’s cemetery, a large tract of land that rises steeply from Fourth Street into the wooded slopes of South Mountain. The cemetery was the site of Walker Evans’ famous photograph of a cross framing South Bethlehem and the Steel. 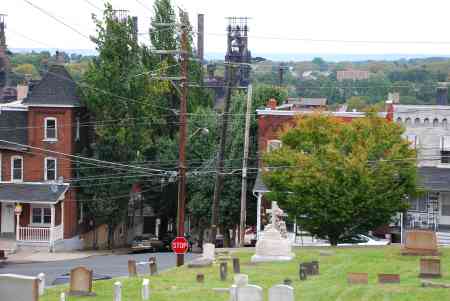 Braving threatening skies and a stiff breeze, a member of SBHS provided a short history of St. Michael’s, the resting place of Catholics from churches throughout the city, and spoke about efforts to document fading or vandalized gravestones and maintain the grounds. St. Michael’s faces a number of challenges: vaultless graves on a shifting hillside; missing, displaced, and buried gravestones; unmarked graves; an encroaching forest that has enveloped the uphill portion of the cemetery; and a lack of adequate funds from the church, the city, or the community to maintain the grounds or document the site before it deteriorates further. 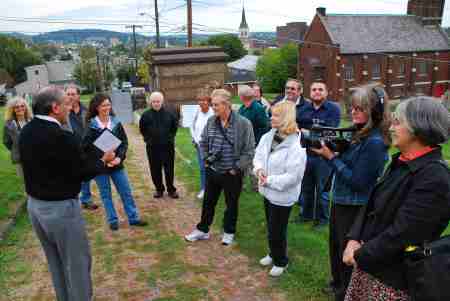 Luckily, there is a positive among these challenges: a group of committed volunteers (led by the SBHS) that is eager to fight for the cemetery. The audience was presented with a “wish list” that will help with this fight, including used lawn equipment, volunteers to maintain the grounds, and donations to help organize the campaign. Most importantly, SBHS encouraged those present to express their interest to the public, walk the grounds, mark the graves of their relatives with flags (or with GPS), write to the newspaper or the City of Bethlehem to express the need to protect the site. Although the land, owned by the Church and hemmed in by Lehigh University property to the north, is not threatened by development, time and neglect have and will continue to take their toll, unless something is done soon.

On a personal note, the view from St. Michael’s is great. It is no wonder Evans decided to shoot from this vantage point, which looks across South Bethlehem,to the Steel and across the Lehigh Valley to the mountains. The amazing thing is that this unique resource does not see more use and receive the attention it deserves.  I would encourage anyone who has not done so to plan a walk through the cemetery; I am already thinking about when I can get back there again.

Walker Evans in the Lehigh Valley

From St. Michael’s the group moved to the Northampton Community College‘s Fowler Family Southside Center for SBHS’s annual meeting and a lecture by noted Evans scholar and photographer Rodger Kingston. Kingston was introduced by Michel Lefevre, of the Pennsylvania Historical and Museum Commission, who spoke about the need to protect urban cemeteries for their historical importance but also because they represent scarce, open, green space in otherwise densely-populated communities. 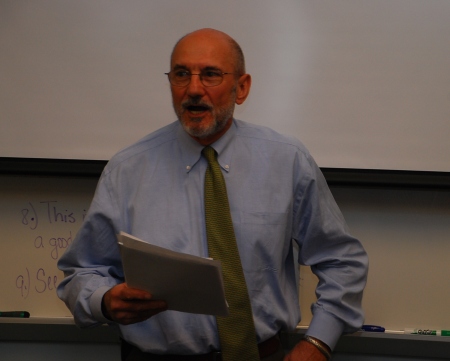 This argument for preservation might seem macabre to twenty-first century conceptions of cemeteries as forbidding places of mourning, yet many proponents of cemetery preservation find that encouraging recreational use is one way of giving the community a vested interest in the maintenance of cemeteries.

After Lefevre’s brief introduction, Kingston presented a slide show on Evan’s career and his influence on other well-known photographers to a packed room of 60 to 70 people. 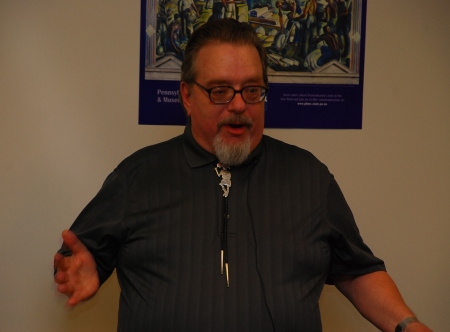 Kingston argued that Evans’ talent was rooted in his ability to capture the spirit of a town or an individual in seemingly-mundane scenes. He also noted Evans’ desire to represent the nobility and pride in working-class and African-American culture. Unlike some photographers of the period, who sought scenes of abject poverty, Evans’ tried to capture the dignity of marginalized people and places.

Kingston’s lecture was followed by a reception at Time Zones Gallery, just down the street from the Fowler Center. 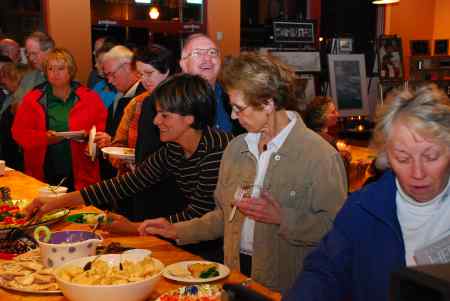 This was an opportunity to view an unique exhibit of Evans’ prints, produced and collected by John T. Hill, at one time a colleague of Evans at Yale University, and to ask Kingston questions about Evan’s life and work. 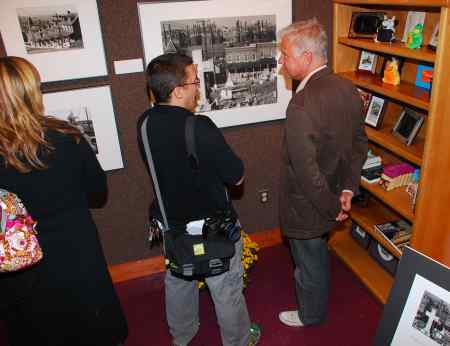 This was a great night for the South Bethlehem Historical Society that would not have been possible without a grant from the Pennsylvania Historical and Museum Commission and the support of the Delaware and Lehigh National Heritage Corridor and the Northampton County Historical and Genealogical Society. 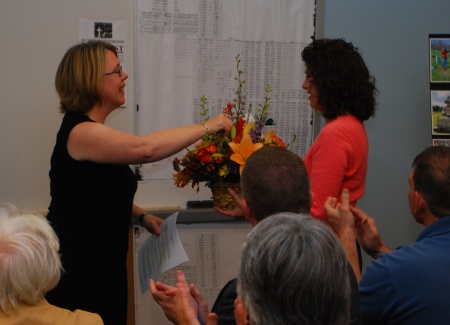 If you are interested in joining the South Bethlehem Historical Society or want more information about St. Michael’s cemetery and how you can help, please contact D&L Historic Resource Specialist (and mastermind behind this successful event) Amey Senape at [email protected]