D&L Comment: Joelle has walked an amazing 13 half marathons! Get a veteran walker’s take on stepping it up a notch and becoming a race pacer.

Guest post by Joelle from her personal blog, Walking with Joelle, November 2, 2014 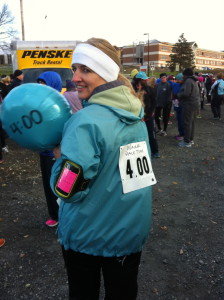 Half marathon #13 is in the books for me, as is my first bout as a pacer.

It can be challenging to keep a pace different from your usual and sustain it over such a distance, especially when contending with 20 mph winds along the race course. (But at least it wasn’t raining!) The plus is that it gave me the opportunity to talk with some first-time half marathoners along the way, which is always wonderful.

And I’m so very proud of Walk With Joelle client, Michele K! Today was her first half marathon as a walker, and she rocked! She finished strong and fast – and earned an award for her efforts!

The race, the D&L Heritage Half Marathon, featured a walker division and awards for the top finishers among the walkers. Michele K. finished 2nd in her age group, 5th among women and 10th overall! I’ll just have to warn her not to get used to it, that walkers don’t usually earn awards in half and full marathons because so few races recognize us as a category. (Let’s hope that continues to change, and thanks to walking coach Michele Stanten for making it happen in this race!) 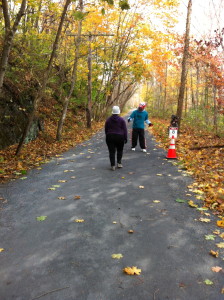 Volunteer Louie – greeting walker Alicia at Mile 8 – was a terrific part of the day, biking along the course and putting in time at mile markers. His spirit was contagious!

The other great thing about this race was that several of my friends also participated, both as pacers and walkers. It’s fitting because marathoning brought us all together in the first place. Nearly 10 years ago, in my days at Prevention magazine, I was involved in its program to train readers to walk half and full marathons. Some of our readers became intimately involved with the program and were integral in its success – and the success of so many fellow race participants! And along the way we spent a lot of fun times together at races across the country. That grew to doing races “off-duty,” so to speak. And although the magazine’s program ended, the deep friendships did not.

So I’m always especially happy to spend a race weekend with friends – friends who know the time invested in training, who know the frustration when a race doesn’t go as planned, who are inspiring and motivating, and who know the joyous emotion of completing a race, whether your first or 10th or 40th (and cheer for you just as loudly from race to race). Thanks for another great weekend, ladies. . . even though it was too short and not a complete group reunion! And congratulations to all the walkers today too! 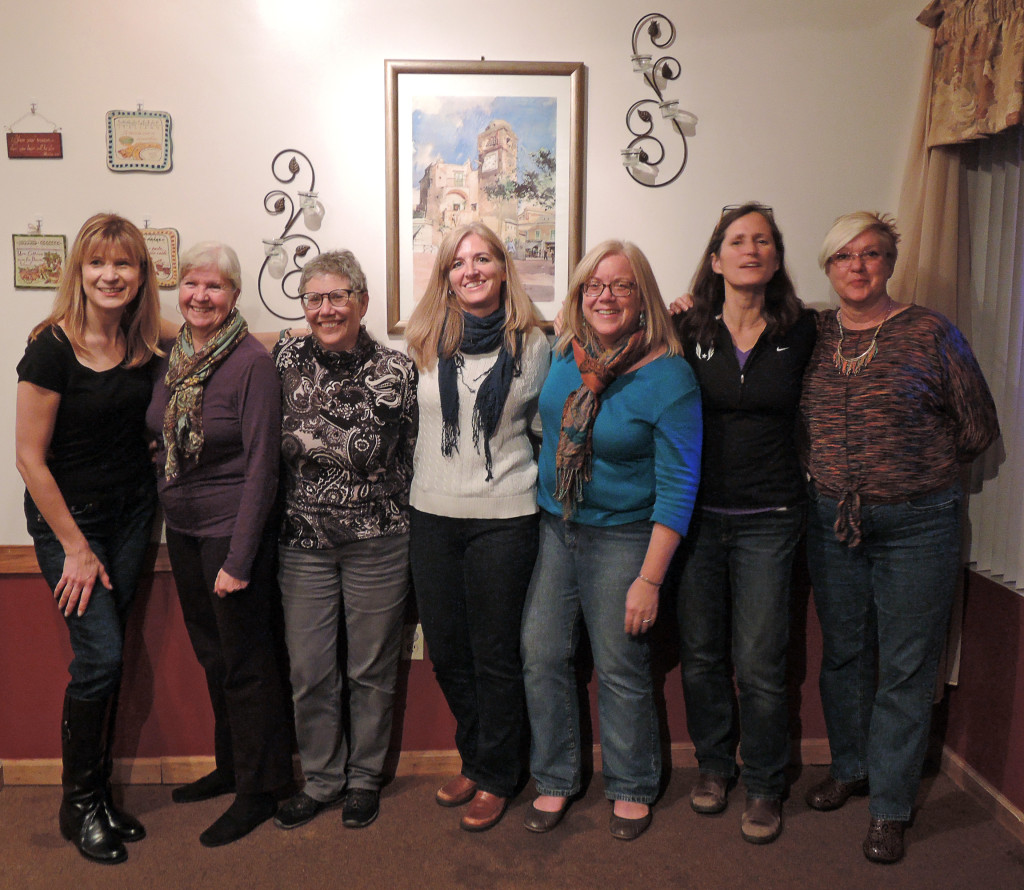 Race friends for pre-race dinner: countless miles have been walked by these seven pairs of feet over the past nearly 10 years!

D&L Comment: We hope you and your group of friends will enjoy a race weekend walking (or running) together for the D&L Heritage Half Marathon Run/Walk on November 1, 2015. Register at http://race.delawareandlehigh.org/ by the October 25 deadline. And we reversed the course this year to go down river (slightly downhill) and hopefully down wind!