Posted in News, Tales of the Towpath

Cong. Dent’s appearances were part of his ongoing effort to encourage students to read and learn more about the history of their communities. 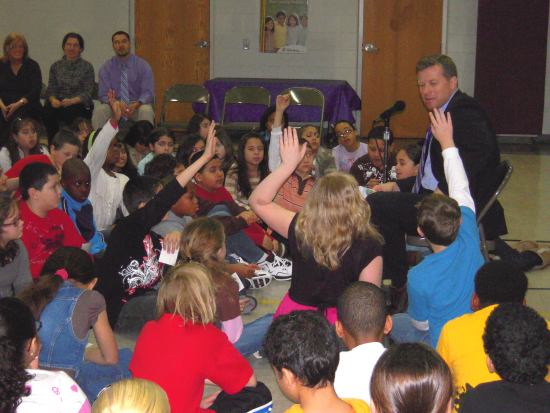 Principal Leigh Rusnak introduced Cong. Dent to 75 students at Freemansburg Elementary who are learning the history of the Lehigh and Delaware canals through the Tales of the Towpath curriculum, which was developed from the storybook. Dent fielded questions from the students that ranged from “Do you know President Obama?” to “Why is history important to us?” The Congressman took his time answering and also explained his job and how he got it. At Slatington Elementary, Dent was asked if he would like to live along ago. He thought for a moment and then stuck his hands into his pockets, pulling out two Blackberry devices and telling the children, “I don’t think I would have done well back then without these. I use them all the time to keep track of all the things I have to do. It would be tough for me to adapt to life back then.”

Freemansburg and Slatington are among the 32 elementary schools implementing the Tales of the Towpath curriculum this year. Nearly 2,000 students are learning local history through the adventures of Finn Gorman, a fictional 10-year-old boy whose father owns and operates a canal boat on the Lehigh and Delaware canals.

“Finn’s story is important to learn,” Dent told students at both schools. “History helps us learn where we came from and how our towns grew, but it also provides lessons that can guide us in the future.”

Tales of the Towpath is now available for purchase from the D&L store.