Cruising, Camping and Curating Through the Summer

The summer of 2015 was filled with canal boat cruises, a summer camp for kids, Get Your Tail on the Trail events, and the opening of a new exhibit gallery in the National Canal Museum. 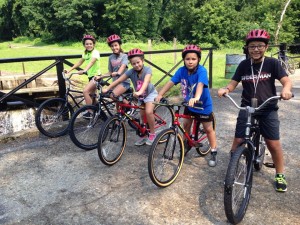 The Josiah White II hosted thousands of passengers on weekly rides, but also became a floating eatery and stage on several Saturday nights for themed dinner cruises. Women in poodle skirts and saddle shoes and men in chinos and white T-shirts danced to 1950s hits during an August sock hop. A week later, the boat became a tasting room for 70 wine lovers who sipped estate grown vino from Bucks County’s Sand Castle Winery.

Other Conversations on the Canal included a Canal themed cruise, an Irish cruise, a beer-tasting cruise featuring craft beers from Easton’s Weyerbacher Brewery, and an Italian cruise with a four-piece band. Prudie Potter, a retired volunteer, organized a group of 42 people who braved rainy conditions to enjoy local Italian history, an Italian buffet and music of the Lou Pettinelli Band of Alpha, NJ. “Everyone had a fabulous time,” Prudie said. “The two women 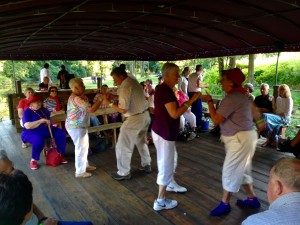 walking with the mules deserve an extra star.” 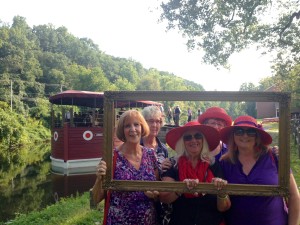 A rainy Fourth of July didn’t stop people from visiting the D&L’s first exhibit in the National Canal Museum’s new gallery room. “An Untryed Enterprise: Forging America’s Industrial Independence,” opened 175 years to the day after the first cast of anthracite-fueled iron was made at the Crane Iron Company in Catasauqua, marking the beginning of America’s Industrial Revolution.

From Belfast to Bethlehem: Irish Immigrants in the D&L Corridor
FEAR: Taming Our Mental Bully (and walking the D&L Half Marathon)