From Belfast to Bethlehem: Irish Immigrants in the D&L Corridor

Immigration and the refugee crises have been in the news recently, but these familiar stories are woven throughout America’s past, too, as waves of immigrants left their countries for the promise of a new life in a new land. Two of this summer’s “Conversations on the Canal” dinner cruises focused on two of the major ethnic groups in the D&L Corridor—Irish and Italian – and why they came to America.  The first of this two-part series will focus on the Irish immigration story.

Ulster Scots, the first immigrants from the island known in Gaelic as Éire, were from the northern provinces. Descended from lowland Scots who moved to Ulster early in the 17th century, they became known as Scots-Irish in North America.  An estimated 200,000 Ulster Scots (out of a total Irish population of about 1.2 million people) emigrated to the American colonies during the 1700s, because they, as Presbyterians (like Catholics), were barred from owning land by their English rulers.  Pennsylvania’s religious tolerance attracted the great majority of Scots-Irish, who supported the American Revolution, and, because they spoke English, assimilated quickly.

Ireland’s population ballooned to 4.5 million by 1800 and nearly doubled again by 1831. The textile and iron industries that flourished there during Britain’s decades of war with Napoleon collapsed by 1820, and most Irish were subsistence farmers on tiny, infertile plots of land that they could not own. Overpopulation became so severe that Britain lifted its ban on Irish emigration, and between 1815 and 1834, the second wave of immigrants–over 400,000 mostly young, single men– left for North America.

They arrived just in time for the canal-building boom. Canals were the first major construction projects in the US, and the first that needed pick-and-shovel workers.  Native-born Americans were not eager to take back-breaking jobs in remote areas, even for the high pay of a dollar a day – but desperate Irish men would. The saying was that all you needed to build a canal was a pick, a shovel, a wheelbarrow, and an Irishman.  A thousand Irish workers who had survived building the Erie Canal came to Pennsylvania with canal engineer Canvass White, and, with help from local German farmers, built the Lehigh Navigation, finishing the 46-mile route that carried anthracite coal from the mines to market in record time.  Irish workers were instrumental in building all the anthracite canals, and later, the railroads that ultimately replaced them.

The Irish famine years of the 1840s triggered the third wave of Irish immigration. One and a half million Irish, more than half of them women, came to the United States between 1845 and 1856. In 1850, Irish immigrants made up more than half of the foreign-born residents of Pennsylvania.  This massive wave of Catholics lowered the percentage of the US population that was Protestant from 97% to just under 90% in only a decade. But for devout Irish Catholics, this meant the pool of marriageable mates was limited to other Irish Catholics, a situation that prolonged the traditional links of clan, kinship, and regional ties for one or two more generations.

The Irish quickly adopted English, but most remained among the ranks of unskilled labor, in mines, factories, and domestic work until the last quarter of the 19th century.  By the 1880s, both public and Catholic schools had been widely established. Education and the assimilation that came from it allowed the descendants of the original Irish immigrants to gain upward mobility in the rapidly industrializing United States. 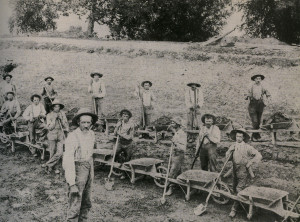