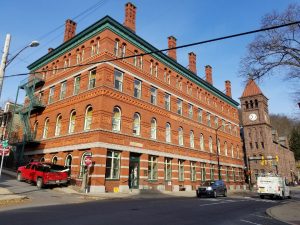 Jim Thorpe (a.k.a. Mauch Chunk) is celebrating its 200th anniversary this year. It’s befitting that the iconic Lehigh Coal & Navigation (LC&N) Building received a meticulous restoration in preparation. Preservation work like this is not easy or inexpensive. The commitment of the property owner, United Neighborhood Community Development Corporation of Scranton, is exceptional in tiny Jim Thorpe.

The architecturally-significant LC&N, located at One Broadway in downtown Jim Thorpe, is a contributing structure in the Old Mauch Chunk National Historic District; built in 1882 (using the latest technology in fireproofing and cast iron structural elements), it was originally designed by prominent Philadelphia architect Addison Hutton. Headquarters of the combined Lehigh Coal Mining Company and the Lehigh Navigation Company, the historic building was rehabilitated into 27 apartments for seniors in 1979. Nearly 40 years later, the 20,000-square-foot building was in serious need of repair.

United Neighborhood Community Development Corporation of Scranton purchased LC&N in early 2017 with the intent of upgrading its major systems and restoring the terracotta façade and bluestone exterior enhancements which had begun to deteriorate and create a safety hazard. The terracotta was painstakingly restored, remolded where damaged and re-coated to preserve its integrity. In addition, all exterior infill windows were removed and new wood windows were installed that replicated the originals. Basic systems which were functionally obsolete included the elevator, HVAC system and roof which were all replaced. Other improvements included replacing floor coverings, appliances, fixtures and kitchen cabinets; all apartment entrance doors were changed to wood.

Total development cost for the project was more than $5 million. Funding was provided by the PA Housing Finance Agency, RBC Capital Markets, Peoples Security Bank & Trust, the Federal Home Loan Bank of Pittsburgh and the PA Department of Community and Economic Development.

Principals of the development team for LC&N include:

Special thanks to the Jim Thorpe Borough Council and Borough Manager, the Carbon County Commissioners, and State Senator John Yudichak for providing support and assistance in making the renovation of this stunning building possible.