Posted in Along the D&L Trail, Trails

Francey Burke, like many others, is an avid user of the D&L Trail.

But her love of the trail extends beyond logging miles or sightseeing.

Burke and her family live in Cape May, New Jersey, but own a second home in downtown Jim Thorpe; a decision that was made so she could be closer to the trail.

“Now I’m so addicted to biking, I can’t stop,” Burke said, with a chuckle. “I like the distance.”

Burke discovered the D&L Trail about eight years ago and, in turn, shifted her focus from hiking to biking. Today, Burke’s passion for riding has resulted in almost daily outings on the D&L Trail. Her husband, Dave, can often be found fly fishing along the trail. 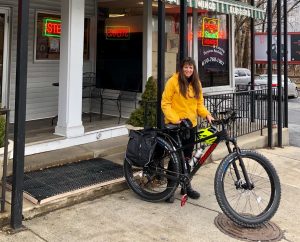 Burke owns different bikes for different parts of the trail, depending on where she is riding that day, and enjoys navigating the Slatington, Lehighton and Lehigh Gorge State Park areas of the D&L. (Her favorite lunch spot is Sal’s Pizza & Family Restaurant in Slatington.)

Burke usually rides alone, though she acknowledges riding solo is not necessarily for everyone. “For me, that’s my outdoor office,” Burke said. “I can do everything, literally, on the fly.”

Burke attributes the appeal of the D&L Trail to consistent terrain and mostly flat surfaces. “Bikers like me look for that,” Burke said. “I don’t like hills that much.”

Though Burke has encountered various wildlife on her travels, she does not mind bumping into the occasional unexpected trail companion.

“Bears are much better to run into than mountain lions,” she said.