Posted in On the Trail, Trails

On Sunday, I decided to walk off a lingering cold by heading north to Hickory Run State Park. Over the last year or so, I have become familiar with linear Lehigh Gorge State Park, through which the D&L Trail passes. Hickory Run abuts Lehigh Gorge but stretches away from the river to include a varied terrain of steep, laurel-blanketed slopes, hardwood forests, pristine mountain streams, and remote swamps. I had passed through Hickory Run several times, stopping at the park office (primarily to use the port-o-potty) but never venturing down the park’s many enticing trails. 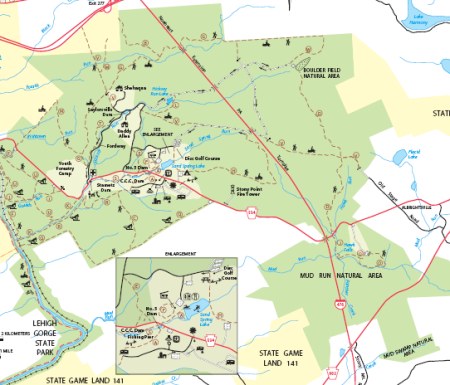 When I arrived at the park from the Northeast Extension of the turnpike, I still had no idea which trail or stream I wanted to spend the day following. I slowly drove east on Rt. 534, pulling over at trailheads to consult my map of the park (available on the park’s website). I personally prefer the less-frequented trails and more secluded areas, so I was attracted to Mud Run Natural Area, on the southeastern end of the park. In 1996, over 1,300 acres surrounding Mud Run were set aside as a state designated “natural area,” meaning that the park management would consciously reduce their intervention in that area to limit evidence of a human presence. To that end, only two short trails–Hawk Falls and Orchard Loop–and a primitive access road penetrate the area, and there is no park infrastructure at all south of Mud Run. I parked at the Hawk Falls Trailhead and made my way a short distance down a well-maintained trail to the confluence of Hawk Run and Mud Run. The water was high and fast moving but clear. I noted a sign and trail marker for Orchard Loop that seemed to head uphill, but I decided to follow an unmarked footpath at the edge of the stream and head east. 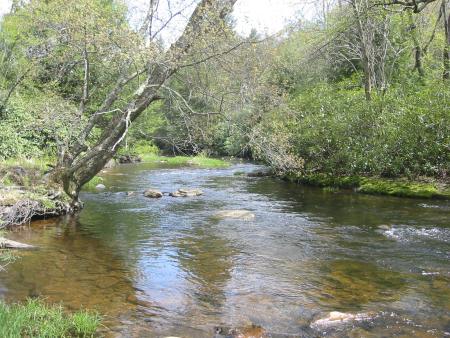 Following the stream was a blessing and curse. The footpath soon revealed itself as a herd path that intermittently died out and resurfaced amid the towering laurel and hemlock. The bank steepened drastically, until I was clinging to trees and side stepping to keep from sliding ten or fifteen feet down into the run. Water from upslope springs dripped down the rock faces and ran in small streams, causing the earth to give way under my feet. Dirt-spattered and scratched, I made my way down to a flat spot on the stream bank, where Mud Run meets with an unnamed tributary and tumbles a few feet down a short series of rapids. I stood watching the pool beneath the rapids, hoping to see a fish dart between the shadows. I had a 4-foot, telescopic pack rod in my backpack, and I decided I would give it a try. On the first cast I pulled out a small brookie, brilliant in color but very small. I tried a few more casts without any luck. 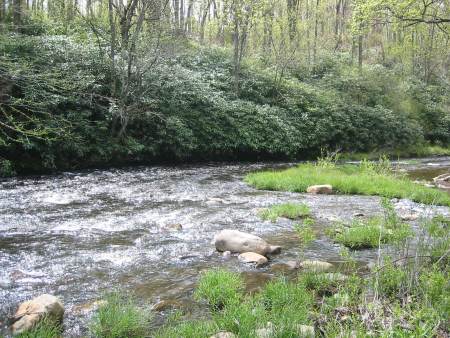 I put away the rod, made my way back onto the slope, and continued the arduous hike forward. After a few hundred yards, the valley opened up below, and I descended to walk along the stream. I reached a section of deep, flat water, downstream from a waterfall of four of five feet. I also noted the yellow trail markings for Orchard Loop, indicating that one could also reach this beautiful spot by much easier means than I had used. I pulled out my rod again, made a few casts into the pool, and saw some small trout following the lure without hitting. A few groups of hikers passed, made small talk, and politely resisted asking why I–sweat and dirt covered–looked like I had been on a jungle safari, when Orchard Loop was a relatively short and flat trail. I fished this section of Mud Run for about an hour and caught only one fish–a fourteen-inch rainbow that was probably the only thing in the stream large enough to go after the monster spinner I had thoughtlessly thrown into my backpack that morning, when preparing for what was supposed to a hike. Next time, I will return with my fly rod. 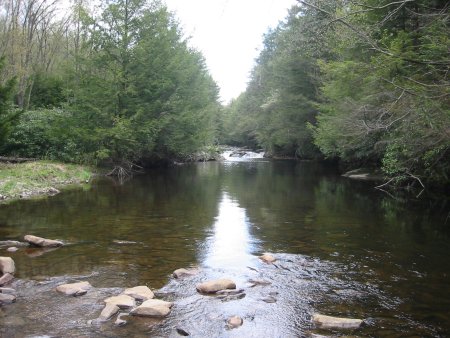 Satisfied that I had done some fishing and spent a few hours on this amazing, laurel-framed stream, I located the yellow markers and followed the southern portion of Orchard Loop back towards Hawk Run. I was impressed with the trail work on this section, especially the switchback, complete with stone cribbing and properly functioning water bars. As I had guessed, the trail followed some thirty to forty feet above the steep section I had crawled along a few hours earlier. As much as I now enjoyed the well-maintained path, I broke trail for the last half mile or so to walk through the open forest and between towering walls of mountain laurel. Dozens of painted trillium were in bloom. This time the herd paths benevolently led me across flat ground towards my parked car. When I reached it, I was worn out, as always, but refreshed. 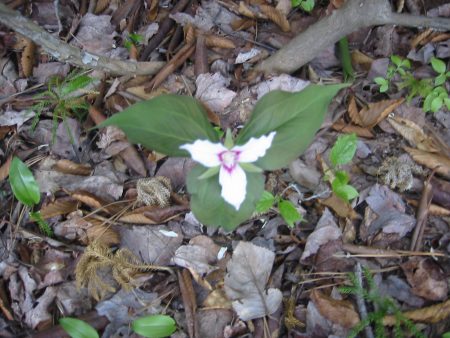 My short experience in a small corner of Hickory Run State Park left me thoroughly impressed. In my mind, I am already planning my next trip. I encourage you to do the same.

Camping in the Corridor
A Walkable Bethlehem?