It’s simple really. I like to run. Actually I love to run. Sometimes I’m a cyclist, or gym rat, or cross country skier, or snowmobile enthusiast. But 90% of the time, I’m a runner. It’s a huge part of my identity, and runners are people with whom I easily identify.

My passion for the sport began in 1974 when I started running high school cross country. In 1975, at age 15, against my parents’ better judgement, I ran my first marathon: the Earth Day Marathon in Long Island, NY. I ran 4:47:04 and it was painful. My parents were right! Five years later, as a college junior, I ran 2:33:43 at the Mardi Gras Marathon in New Orleans. It would be a mark that I would never again reach, despite endless miles of training and numerous attempts.

My wife and I moved to Lehigh Valley in 1986. We live a mile from the Nor-Bath Trail. For years I trained on the Nor-Bath before it was officially a trail. It was an abandoned railway kept open by kids on dirt bikes and four wheelers. I loved that three-foot wide linear slice of heaven. Then one day a large machine came down the trail and made it wider and put a smooth surface of crushed cinder on it. I was upset; I thought they had ruined my trail! I couldn’t have been more wrong.

I also discovered the D&L Trail section from Allentown to Easton. I ran, biked, and raced on it. It was my special place to get away, to think, to recharge my batteries. I was obsessed with spending time on the trail. Each time a new section was complete I had a new place to explore. When the segment from Cementon to Slatington was opened, it connected me to an endless playground. I can now ride my bike from my house to White Haven and beyond and be on less than five miles of pavement.

And all this time I was unaware that there was an organization, the Delaware & Lehigh National Heritage Corridor, behind all of this wonderful trail development.

And then it happened. In 2011, the D&L Marathon and Half Marathon was born. I was in! How could I pass up an opportunity to race on the trail on which I trained so frequently? The passionate folks at D&L did not disappoint. They organized a quality race with a lot of attention to detail. I ran in the first three annual events and vowed I’d compete in this race forever. Unfortunately, the following year I was injured. But I wanted to participate, so I volunteered. This gave me a whole new perspective on the behind-the-scenes workings of event planning.

A year later, in 2015, I was invited to direct the race. The marathon had been dropped and the event had morphed into a half marathon run and walk. It had become a unique event that includes competitive and participating runners, and it is the only walker-friendly half marathon in the region. Twenty percent of the entries are walkers.

The challenge became how to make one of Lehigh Valley’s prettiest premier races even better. We reversed the course in 2015 to make it faster and more participant- and spectator-friendly. We’ve added indoor facilities at the start and an indoor post-race feast at the finish. This year, long-sleeve shirts will replace short-sleeve Ts and more awards will be presented, in five-year age groups instead of 10-year increments.

I love to run and I love the competition. I also love the trail. Directing the D&L Half lets me support all three. We’re doing all we can to assure that this race is on runners’ and walkers’ “must do” lists. 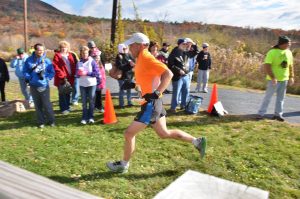