Posted in History, National Canal Museum, Tales of the Towpath

The popular D&L elementary school field trip program, Immersion Days, has grown by leaps and bounds over the past few years, and now attracts 2,400 students throughout its 7-week season.

The program, which focuses on scientific and technological principles associated with the building of canals and their operation, originally ran for four weeks. A fifth week was added because of demand from schools participating in the D&L’s Tales of the Towpath social studies curriculum, which introduces fourth-grade students to life along the Lehigh and Delaware canals in the 1850s. This past February, a seventh week was added. 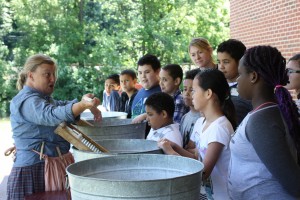 Immersion Days, with canal lessons and a ride aboard the Josiah White II canal boat, was a perfect ending to several weeks of classroom studies.

“I have had several parents tell me this is their favorite school trip,” said Bob Sidelinker, a longtime Tales of the Towpath teacher at Warwick Elementary School in the Central Bucks School District. “The docents are so well-prepared. Over the last four years they dealt with groups arriving late, rain, and cold. The staff has always accommodated us in a way that creates a positive experience for kids, parents, and teachers.”

With Parkland, Southern Lehigh, Morrisville and Lopatcong school districts becoming part of the Tales of the Towpath family next school year, demand is certain to increase.

“It’s a bit of a problem, but a good problem,” said D&L Director of Education and Museum Services, Dennis Scholl. “We haven’t explored the fall season yet; I imagine it’s time to take a look.” 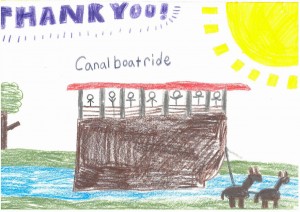 Message from the President: What’s in a Name?
“Dixie: Easton’s Cup of Health and Happiness” Opens at National Canal Museum