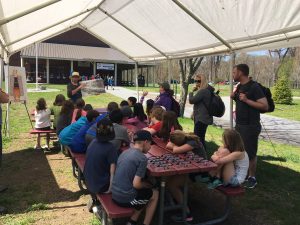 Students from throughout the region are flocking to Hugh Moore Park in Easton to learn about what life was more than 175 years ago.

Immersion Days, the D&L’s annual elementary school field trip program, which kicked off April 23, are held Mondays through Fridays at the park. Each day, a different school visits the park during the seven-week educational sessions.

Students start their day with a ride on one of America’s last mule-drawn canal boats – the Josiah White II – and then are divided into different activity groups.  With guides dressed in period garb, they are shown the process of iron-making and blacksmithing; learn about simple machines (pulleys, levers, inclined planes, gears) used in the construction and maintenance of the canals; friction and buoyancy; and canal life in the 1850s through four lesson sites and nine interactive activities. This year, more than 2,800 students from Northampton, Lehigh, Bucks, Monroe, and Pike counties and New Jersey will participate in Immersion Days.

“We signed up the first year and the kids loved it,” said Tori Simmons, a fourth-grade instructor in the Parkland School District. “Some of the things I think the kids really responded to were the activities where they are doing laundry with a washboard and hanging their clothes on the line. It was so interesting and eye-opening for them… The blacksmith station is a good one, too. The kids had no idea how metal was formed; that concept of bending metal was not in their wheelhouse until they saw it happening.”

Though Cetronia’s 2017 trip to the park was rained out, Delaware & Lehigh National Heritage Corridor Education Manager Dennis Scholl instead visited the school. “Dennis has been so great at accommodating us and providing materials,” Simmons said. “He came to our school and spoke to (the students) and we had kind of an assembly program. It was very obvious he is very passionate about the whole project.”

Immersion Days are designed to introduce fourth-grade students to the science, technology, engineering, and math (S.T.E.M.) behind the building and operation of the Lehigh and Delaware canals. The program was launched in 2001 by the National Canal Museum and originally ran for three weeks. A fifth week was added due to the demand from schools participating in the D&L’s Tales of the Towpath social studies curriculum. In 2016, a seventh week was added.

Pfaff Elementary teacher Lisa Gridley said her students enjoy stepping back in time. “I think they are always surprised and interested to hear how life was harder and simpler, yet children learned everything they needed for the time, and people accomplished so much with a lot less,” she said. “The students can see that their lives would have been so different! However, people were content and felt proud of their hard work; their work still affects and helps us today. It’s important for kids to see that.”

Immersion Days runs through June 9 at Hugh Moore Park and we are booked solid. For more information and to reserve time for your school in 2019, please contact Daphne Mayer at [email protected].

Be sure to join us on June 2 for our Founder’s Day 30th anniversary celebration at Hugh Moore Park in Easton. Your support of the D&L helps us fund educational programs such as Immersion Days and “Tales of the Towpath,” while helping connect others to culture, nature, history and wellness. Become a D&L member today!