Posted in Membership, Tales of the Towpath 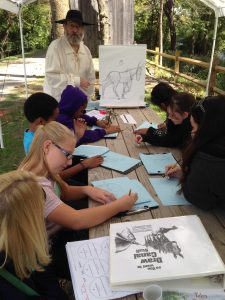 Dennis Gerhart was a wonderful field trip educator at our Freemansburg site, delighting students with his very simple, straightforward, and humorous way to draw mules using simple ovals and shading. I saw many excellent mules from kids who started the lesson with doubt about their artistic abilities.

Dennis L. Gerhart, 71, of Quakertown, previously of Lansdale, passed away on Sunday, February 24 at his home. He was the loving husband of Maria A.Gerhart for 35 years. Dennis graduated with a B.S. from the Philadelphia College of Art in Industrial Design. He served in the United States Marine Corps as a Lance Corporal and was awarded the National Defense Service Medal for service during the Vietnam War. As an industrial designer, Dennis designed visitor centers, museums and Trade show exhibits.

We hired Dennis in 2007 to illustrate Tales of the Towpath. It took one meeting with him for me to understand that he was a unique person who not only was a master illustrator but also a man who truly understood history and could interpret it accurately, with great precision through his art. He told me more than once that he would be comfortable living in the 1800s. His art reflected that. He drew the best mules I have ever seen.

Dennis and I worked very closely on producing illustrations that accurately depicted the characters and events I wrote about in Tales of the Towpath.  I remember one pencil sketch – of the Lenape girl, Sarah – that wasn’t quite right. She was dressed in Lenape attire, which would have been dangerous back in the days when some European people in the area still had recollections of Lenape attacks on homes and settlements during and after the French and Indian War. I pointed out to Dennis that Lenape still living in the area would have “disguised” themselves as white people to avoid retribution. I remember him saying “Hmmm, what shall we do to Sarah?” So I told him to delete her buckskin dress and draw her wearing a blouse and long skirt, and please put her long dark hair in a “bun,” since he had it flowing loose. 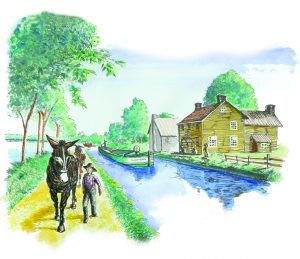 Dennis Gerhart’s cover illustration of Tales of the Towpath, written by Dennis Scholl.

Dennis was extremely generous and would allow the D&L to use many of his canal illustrations for reproduction on a gratus basis. He had two excellent books – “Let’s Talk About Canals” and “How to Draw Canal Stuff” – all ready to be printed but had no idea how to market them, or any interest in marketing them. We tried to help but were unable to interest any publishers.

Dennis was one of our field trip teachers at Freemansburg, delighting students with his very simple, straightforward, and humorous way to draw mules using simple ovals and shading. I saw many excellent mules from kids who started the lesson with doubt about their artistic abilities. He had to stop teaching at Freemansburg after four years because his knees were giving out and he had trouble standing and walking. He was kind enough to train another docent to do his lesson, never thinking of leaving us in the lurch. Dennis was the only person to draw Finn Gorman, the main character of Tales of the Towpath.  He will be dearly missed.

A peek into the holdings of the Museum Archives
D&L Member Feature: Sharon Wunner of Bear Creek Township