Running a race is a choice that you can make. But what about the people who don’t have the option to run a race, or run at all? There are many children and adults that are not physically capable to run, let alone run a race.

“You can run for me anytime!” A simple phrase that sparked a movement.

IRun4 is a website that allows runners to pair up with individuals who cannot physically run. Runners are able to find a new sense of purpose for running while sharing who they are running for and raising awareness to diseases and disabilities of all types.

The D&L Heritage Half Marathon is honored to have Lori Ann running for Ashton in this year’s race.

At the age of 2, Ashton was beaten very badly by the person babysitting him. He was beaten so badly that the doctors did not believe he would survive. Ashton was taken off life-support a week after his injury because the doctors said he didn’t have any brain activity. After several surgeries, many doctor appointments, and many therapy appointments, Ashton continues to thrive into the happy and joyful child that he is despite everything that has happened.

Ashton’s grandmother applied on IRun4 to match Ashton with a runner and that is how he paired up with Lori Ann. They have run about 370 miles together. Lori Ann takes pictures and posts them to Facebook for Ashton to see and experience.

“IRun4 was started by Tim Boyle. The organization has grown with tremendous speed as it’s such a simple and pure concept: We run for those who cannot. Amazing. We are like a family and grieve when we lose a buddy to the angels. We are there to support each other, it’s truly inspirational. I was born legally blind but I am blessed with the ability to run for Ashton, whose gift of running was stolen. Kindred spirits, he has problems with his eyesight as well.” – Lori Ann 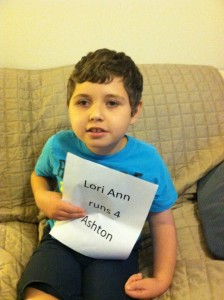 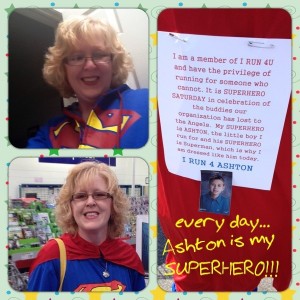 Conversations on the Canal: Our Anthracite Heritage
Walking a Half Marathon