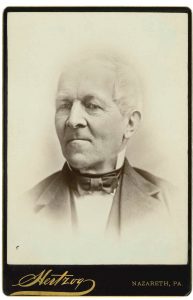 The Henry family of Northampton County is most famous for the iron and gun making industries they established in Nazareth, Jacobsburg, Henry’s Forge, and Boulton, beginning as early as 1780. In these early American villages—located in today’s Central Region of the D&L National Heritage Corridor—the Henrys harnessed waterpower from Bushkill Creek to forge the first bar of iron in Northampton County and make tens-of-thousands of rifles, muskets, shotguns, and pistols for the Fur Trade and frontiersmen in the American West, mountain men in the Rockies, US soldiers in the War of 1812, Union soldiers in the Civil War, and hunters and trappers across the country. In partnership with the D&L National Heritage Corridor, PA Department of Conservation & Natural Resources and Jacobsburg Historical Society, the Henry family’s early American industrial history and heritage is well preserved and interpreted for the public at the Boulton Historic Site, in the Jacobsburg National Historic District at Jacobsburg State Park, in Bushkill Township. 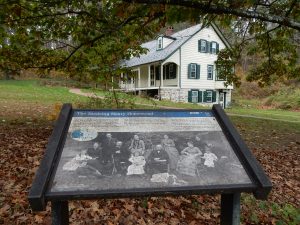 But lesser known and celebrated is the early conservation history of James Henry (1809-1895), who wrote Pennsylvania’s first bill to protect and restore the Commonwealth’s streamside forests and water quality; actively lobbied the State House and Senate to support the bill in Harrisburg; and petitioned the Pennsylvania Forestry Association, the American Forestry Congress in Boston, and the USDA Forestry Division in Washington to support and advocate for schools of forestry in the nation’s colleges and universities. And all this as an active volunteer and engaged citizen, while managing the Boulton Gun Works with his family.

At the height of the early logging industry in the 1880s, James met with Pennsylvania State Senator Jeremiah Hess from Northampton County to seek his help in petitioning the Commonwealth to do something about the uncontrolled stormwater erosion and soil sediment pollution of streams and rivers across the state. Senator Hess, trusting in James’ grasp of the situation, understanding of ecological principles, and formidable writing skills, encouraged Henry to draft a bill to address the issue point by point, which the senator would then sponsor in the State Legislature in Harrisburg. James immediately went to work on drafting just such a bill on behalf of Senator Hess.

“Your attention is called to the very important fact, that our streams and living springs are more or less suffering by the denudation that has taken place; and they are destined to suffer much more by the continued destruction of timber, not a vestige of which is left standing for their protection and preservation.” ~James Henry

During the second session after its presentation in the State Assembly in 1885, Senate Bill 71 (House Bill 518), “An act to encourage the planting of trees near the springs and along the water courses of the Commonwealth of Pennsylvania,” passed the Senate with but one dissenting vote. And during the same 1885 session, it received an affirmative vote in the State House of Representatives and passed the second reading of that body. Unfortunately, the bill failed to pass its third and final consideration of the State House by a vote of 90 to 58.

“Admitting that humus produced by the fallen leaf is the preservation of our waters, and that the State is the undoubted owner, we must conclude that the guardianship of the woodland territory through which these waters find their way should be assumed by the State.” ~James Henry

Had it passed that final reading in the State House, the bill that James Henry wrote at the family homestead at Boulton would have become Pennsylvania’s first public law addressing the protection of waterways by creating a state nursery for the planting of riparian forest buffers. It wasn’t until 1897—twelve years after Henry’s bill was defeated in the State House of Representatives and two years after his death—that the Pennsylvania State Legislature would authorize a Forestry Commission and Forest Reserve System to rehabilitate the state’s forest and water resources though the creation of a forest nursery system, as was the longtime vision for which James Henry so tirelessly fought.

“The establishment of nurseries for the cultivation of useful forest trees, and offering these for gratuitous distribution to the landholders of our State, is to bring about the recuperation of our woodlands and water courses. By instituting a system of planting, many of the terrors of drought and flood can be warded off, and in order to carry out any measure having this end in view, the State and citizen must act together.” ~James Henry

While Senator Hess sponsored Henry’s bill in the State Capitol, James himself not only vigorously lobbied the State House and Senate for support of the measure; he also petitioned the Pennsylvania Forestry Association, the American Forestry Congress in Boston, and the USDA Forestry Division in Washington to recommend and file support for the bill in Harrisburg. At the same time he was lobbying these lawmakers and agencies to support his forestry bill, he also petitioned them to aggressively support and promote forestry as part of the academic curriculum in institutions of higher learning in Pennsylvania and across the nation. In a letter to the American Forestry Congress, James wrote, “In conjunction with this scheme (his forestry bill), however, no suggestion could be more urgent than to appeal to all our Colleges to open schools of Forestry. There will be but lukewarm movements made in our Legislatures, looking to the encouragement of dendrology among our citizens, until our representatives themselves have been educated up to the subject.”

“The protection of our streams and springs should be the first avowed object of arboriculture in our State, and the great work naturally falls on the State, it being the proprietor of the waters as it is of the game and fish.” ~James Henry

James Henry was both a man of his time and a man ahead of it. Over 130 years after James Henry first articulated his vision and wrote a legislative bill for forested buffers, the restoration and protection of streamside forests and water quality is today a subject of community concern and conservation initiatives throughout Pennsylvania. And because of early education advocates like Henry, forestry and environmental science programs are today offered at state colleges and universities across Pennsylvania and throughout the nation. 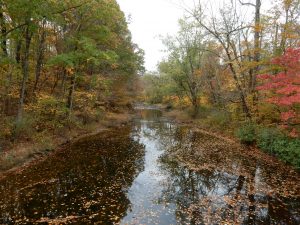 “I am looking forward to the time, when, in Pennsylvania, our Colleges will combine Forestry with other useful practical studies. It belongs to the most captivating of our intellectual pursuits, and I have no doubt our Youth, and especially those who represent our rural interests, would listen to lectures on this subject with intense interest. I hope you will regard with favor what I have thus cursorily written you. To me the work is a labor of love, and I have been in it since 1875.” ~James Henry

Understanding the ecological and economic benefits of riparian buffers today, the Commonwealth of Pennsylvania now offers grant funding to municipalities and nonprofit organizations across the state to reforest streamside buffers that have been lost. In fact, the D&L Corridor has awarded tens-of-thousands of state dollars to its partner organizations in Lehigh and Northampton Counties for streamside buffer restoration and education though its Mini Grant Program with Lehigh Valley Greenways and the PA Department of Conservation & Natural Resources. And today, certain land trusts and government agencies even offer fee simple and easement purchases of streamside properties to be managed as permanent riparian buffers for water quality and flood protection—a fact that would come as a delightful surprise to James Henry, who in the 1880s wrote, “It remains a problem however, not easily solved, how these borders of our streams could now be appropriated by our Commonwealth, as their purchase would be out of the question. Without the timely protection of these bordering lands and securing them for an exclusive arboriculture, our water supply will diminish at a fearful rate, and floods will ravage the districts through which the creeks and rivers flood more and more every year.”

To learn more about James Henry’s life and conservation efforts, to read more excerpts from his letters of petition for his forestry bill and education advocacy, and to read PA Senate Bill 71 in its entirety, click here: http://www.paenvironmentdigest.com/newsletter/default.asp?NewsletterArticleID=37503 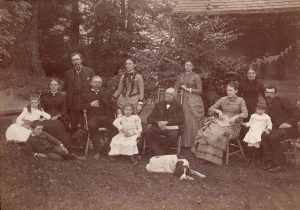 Riding, Hiking, Collecting Data and Mapping: My Summer Internship with the D&L
My First Race on Foot