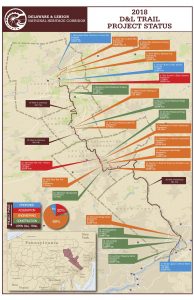 Building the D&L Trail is like a huge, very complicated jigsaw puzzle. Think about it for a moment… we are re-connecting a 190 year old transportation system that has been disturbed by railroads, highways, modern municipal services, multiple landowners and (sometimes) neglect. The Delaware and Lehigh National Heritage Corridor (D&L) organization and its staff who are working on the bridge project have taken every opportunity to smooth the very complicated state and federal processes that are required when using public funds. All this ‘I’ dotting and ‘T’ crossing takes time. And when resources are either unavailable, inaccurate or require further review, more delays occur.

A reminder: The D&L serves as the project manager for the D&L Trail; it does not own the trail, land or bridges. In the case of Jim Thorpe, Carbon County owns the bridge and the Borough of Jim Thorpe owns the trail connector on the east side of the bridge. Both are flanked by lands owned by Reading, Blue Mountain & Northern Railroad and Norfolk Southern Railroad. The D&L’s role is complicated but it’s a method that works throughout our five county region.

We were on track to simultaneously open the bridge and trail on June 11 (the date set for the dedication and the Rails-to-Trails Sojourn) until we had to file a DEP permit amendment (a manhole was inaccurately depicted on as-built drawings). When bids were received earlier this month, we also learned two water/sewer lines and the manhole would have to be replaced. DCNR and the D&L have advised the Borough to apply for a grant amendment and the funds needed for the trail, the retaining wall and the rest of the work on the east side of the pedestrian bridge. Thus far, no local funds have been expended for these improvements.

It’s a big letdown for all of us, but the Mansion House Bridge will remain closed until further notice because the trail connector on the east side of the Lehigh River is incomplete. When we have an accurate timeline for its completion we’ll let folks know. Until then we encourage visitors and trail users to sign up for updates HERE.