Lincoln Steward Prepares to Bike 284 Miles on the D&L Trail In ONE DAY: Bike and Gear

Posted in Events, History, News, On the Trail, Trails

My Bike and Related Gear

One important aspect to consider when planning an event such as this is which type of bike to ride. Luckily, I have a great local bike shop (Cycle Fitters, in Easton) to help me out with that decision. Every rider is different, so my bike choice may differ from others, but I can share which equipment I use, and the reasoning behind that decision.

The bicycle I will be riding is called the Fargo and is made by Salsa Cycles. It is essentially a rigid (no suspension/shock absorbers) mountain bike frame with drop-style road bike handlebars. I chose this particular bike because it combines the benefits of both a road bike and a mountain bike, making it extremely versatile. 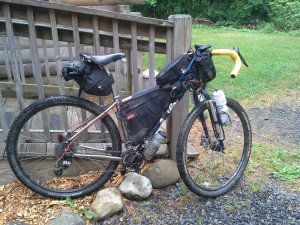 I prefer the rigid frame because the D&L Trail contains many miles of pavement, and even the unpaved sections are smooth enough that I feel shock absorbers are an unnecessary source of weight and power loss. Since it is a mountain bike frame, it will accommodate larger width tires, which can be used at a lower pressure. I usually run mine at 35-40 psi. This absorbs the vibration from riding on gravel or rougher pavement.

This bike has 29″ wheels which allow it to roll over obstacles such as tree roots easier than the older style 26″ mountain bikes. They also have more rolling momentum, so it’s easier to keep the bike rolling once it’s moving.

The drop handlebars are for comfort, since there are several different positions to place your hands on the bars. Moving my hands will actually slightly adjust my sitting position, which shifts the pressure points on both my hands and buttocks, avoiding body parts from getting numb – a huge benefit when sitting for hours on a small saddle.

The saddle is another vital decision, since my butt will be on it for more time than most “normal” people would like to think about. I ride on a Brooks B-17, wich is nothing more than a thick slab of leather stretched over a set of steel rails. While this may not sound ideal, you must understand that I have literally ridden thousands of miles on it, so it is broken in – moulded specifically to the shape of my posterior, and with enough elasticity to also help absorb some shock and vibration.

Probably the most important aspect of the bicycle is the proper fit, and John at Cycle Fitters took care of that. He first made sure that I was on the correct size bicycle frame, but fitting goes much further than that. He took different measurements on my body, both on and off the bike, and made miniscule adjustments to assure that every detail of the bike was dialed in to fit my body. I used to think that some of the aches, pains, and cramps I would get from riding just a few hours were just a part of cycling. Now I have a precision-tuned machine that I know I can sit on for extremely long periods of time – up to 16 hours so far.

There are also several accessories I’ve added to my bicycle. I use 3 water bottles filled with an electrolyte solution, called Skratch (similar to but preferred over Gatorade – more on that in the “Nutrition/Hydration” write-up). Two of them are mounted to the fork, which makes them much more accessible than the standard frame-mounted location on most other bikes. Since I can see them right out of the corner of my eye, there is no need to look when grabbing or replacing a water bottle. The third is very low, down by the pedals, which is used as a reserve.

I have a frame bag which fills the entire main triangle section of my bicycle frame. I keep a hydration bladder and food stores in that. I also have a very large under-saddle bag in which I keep clothing. You sometimes get surprised by a sudden drop in temperature, or precipitation on a longer ride, and it’s best to be prepared for these events. A small bag with tools is also essential for being able to repair any mechanical failures, such as a flat tire.

In addition to all of that, I upgraded my front wheel to one that contains an electrical generator. My lights (head and tail) require no batteries, although I do have an extra rechargeable headlight and taillight just as a backup. During the day, when I’m not using lights, I can use that generator to power a USB charger which can recharge my Garmin or my phone.

The Garmin has also become an essential tool on the bike. It not only monitors my speed, cadence, heart rate, elevation, location, and outdoor temperature, but it has a full-color map screen and turn-by-turn navigation capabilities so I won’t get lost no matter how far from home I wander. At the end of a ride all of that data can be downloaded into a computer for future reference.