Lincoln Steward Prepares to Bike 284 Miles on the D&L Trail In ONE DAY: Why the D&L?

With all of the riding I have done, one would be right to assume there have been several negative incidents, many involving automobiles. I have been lucky enough to survive these misfortunes without too serious of injuries, and found myself asking, “where can I ride my bike safely, without having to assume the risks involved with sharing the road with cars?” While mountain biking is a viable option, it also has potential injury-causing hazards, mostly associated with the terrain itself. Also my rides would be limited to areas where mountain bike trails exist, restricting the amount of territory I could cover. This is when I discovered the rails-to-trails, and canal path systems.

Canals are flat bodies of water, and trains are not good at climbing hills, so one of the great things about canal towpaths and railroads that have been converted to trails is that they are relatively flat. One of the biggest factors that prevent people from wanting to ride a bicycle is that riding up hills can be difficult. The D&L Trail offers a large expanse of mileage that can be covered without having to ascend much elevation. 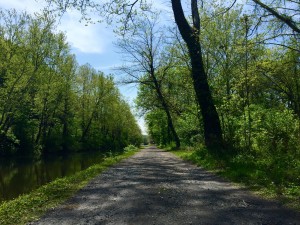 Besides my own personal limit-pushing, goal-achieving agenda, another one of the big reasons for this ride is to help raise awareness about the valuable asset we possess in the D&L Trail. I feel it would be advantageous for municipalities to do anything they can to help maintain the trails, and re-connect the sections where there are gaps that the trail does not exist. As an avid trail user, I have found ways to interconnect these missing sections, but many people can’t continue on further. They may be unfamiliar with the neighborhood streets necessary to traverse, think they have reached the end of the trail, are uncomfortable walking/riding along the railroad bed, or don’t possess the bike handling skills needed to follow a single-track mountain bike trail through the woods.

The D&L Trail is also beneficial to local businesses. So often on my rides I find the need to stop somewhere to replenish my food and drink supplies. I have also taken part in several “destination rides,” where the whole point of getting on the trail is to end up at a place where my group can stop for a meal, or some form of entertainment. It amazes me how many restaurants, coffee shops, brew pubs, ice cream stands, convenience stores, and public parks are easily accessible just a short distance from, if not right adjacent to the trail. 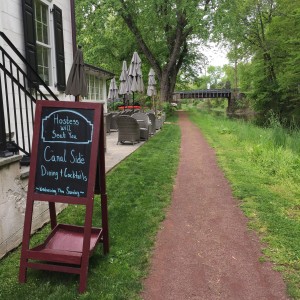