I had set an alarm for 8:00am Saturday morning, but woke up a little earlier, the alarm never sounded.  Although I wasn’t really worried about the ride itself, I was extremely anxious to get going.  I had planned on leaving my house at 10:30, but had already prepared everything the night before.  What was I going to do for the next 2 1/2 hours to occupy my mind? I made my morning coffee along with a few fried eggs and toast for breakfast. I looked at social media for a half hour or so, then checked and double checked all of my gear to make sure I wasn’t forgetting anything. I took a quick shower to make sure I was fully awake, and knowing that it would probably be close to 30 hours before I would be able to do so again.  After what felt like an eternity of walking in circles around my house, I outfitted myself in my biking attire and prepared to head out. The time was 10:25am.

After a quick stop at my dad’s house in Tatamy, I continued my nice, easy spin into Forks Township. I stopped to pick up Curt Byler, who had agreed to roll to the start with me, and continue on for the first three hours of my journey. Ordinarily, he would be one of my riding partners who might attempt this entire endeavor with me, but family obligations prevented him from doing so.

Rather than taking the easy, flat route to the start, I decided I wanted to climb over Paxinosa Road East, and down through the neighborhood of Lafayette’s College Hill. My thoughts were that climbing a hill would get my legs used to pushing at a certain pressure, making the flat ride on the trail easier. Otherwise I would need the first 30 miles or so to get warmed up.

We arrived at the Forks of the Delaware, the northern end of Delaware Canal State Park, which is an 830-acre Pennsylvania state park in Bucks and Northampton Counties, paralleling the Delaware River between Easton and Bristol, at about 11:30am. There was already a large number of people there waiting for us – family, friends, fellow cyclists, and members of the Delaware and Lehigh National Heritage Corridor. It was almost overwhelming.  Shortly after my arrival, Scott Pretti rolled up, my partner who was going to ride the entire distance with me. I gave a short interview to Christy Potter from the Morning Call newspaper, took a little time to thank everyone for being there to support us, posed for a few photographs, and was ready to begin the journey. 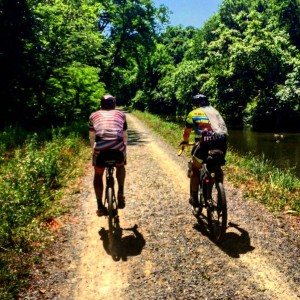 We departed at 11:55, five minutes ahead of schedule, and headed south along the D&L Trail, Delaware Canal Towpath. I wanted to ride slow at the beginning, and try to keep the group together. It was Scott and I in the front, followed by my mother, Deby Steward, then Curt, Neal Hanson, Mike DeJesso and Chuck Patterson with his two kids. There may have been even more riders behind, and I apologize if I’ve left anyone out, but at that point my mind was focused on the close to 300 miles that lie ahead.

The pace gradually increased, and we eventually dropped Mike, Chuck and his kids, they were no longer in sight. After a couple miles, Todd Weidman and his wife Renee joined us from behind. They got to the start right at noon and missed us since we rolled out early, and raced to catch up. Just after crossing I-78, only 2 miles south of the start, we encountered our first minor obstacle, a concrete spillway flowing with water about one inch deep. Often, this is just a low spot in the trail, covered in concrete instead of gravel, and it is dry. In the summer, the canal is full of water, and this is one of the locations where the canal is allowed to overflow into the Delaware River.  The thought of wearing soggy socks for the next several hours was not appealing, so we slowed the pace to a crawl to get through, so that our feet would not get wet from the water splashing up from our tires, then continued on. In another 2 miles, my mom and Neal peeled off from the group and waited for Chuck and his kids. Their plan was to stop at the Canal Side Cup, a refreshment stand on route 611, to get ice cream before heading back home. 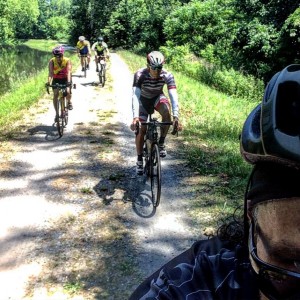 After only another mile, we encountered the first “major” obstacle, at Raubsville.  Shortly after crossing a wooden bridge spanning another spillway, there is a set of stairs that requires riders to dismount, carry their bikes up the steps, cross Canal Road, then re-enter the trail on the opposite side of the street. Now the ride got moving. We had been riding at 12-14mph, but now began gradually increasing speed. Our original plan was to try to maintain between 14-16mph, but we kept finding ourselves pushing 17-18mph, just out of habit.

For the most part, the trail had been two tracks wide, which allowed us to ride two abreast. This enabled us to easily maintain conversation as we rode along, occasionally getting into a single-file formation to allow for another passing bicyclist, a jogger, or pedestrians.  Before we knew it we were all the way to the covered bridge at Frenchtown, where Todd and Renee decided to break off and head back.  At this point we had covered a little over 18 miles in about an hour and a half.