We were down to three riders, Scott, Curt, and I.  We would take turns riding side-by-side, with the third rider either far out front, or at a safe distance behind.  The weather had been very dry, so the reason for keeping distance was that a noticeable amount of dust was being kicked up by the lead riders(s). Before long, even with keeping distance between us, we could notice the dust building up on our bikes and bodies. The trail is mostly covered with a crushed red shale, like the color of red bricks. The powdery red dust slowly accumulated on everything, giving it a pinkish hue.

We rolled along without incident, periodically having to line up single file as we approached other trail users, narrow bridge underpasses, or the occasional flock of geese. About half way to Bristol, across the river from Stockton, NJ, we had to go around a construction site, where a bridge over the canal is being re-built.

In another 3 miles we passed through the town of New Hope, where the path gets a little more narrow, and several buildings actually back up right to the trail. There is a set of stairs we needed to walk our bikes down before riding briefly along, then crossing Main Street. The trail soon makes a dog-leg – first a left turn, over a bridge, followed by a quick right turn. This section through New Hope is not too difficult for us to navigate, having been through on previous rides, but can be a little confusing on a person’s first time through, since it is not obviously marked with signage.

At about 2:45, just before Yardley, Curt was talking of peeling off to turn around and head back home. At this point I tried to play Devil’s Advocate: “You know, if you ride just another couple miles, you’ll be at 50 when you turn around – this will put you at 100 miles for the day. You may be disappointed if you get home and your odometer only reads 96…” He lets me suck him in to riding as far as the I-95 underpass, where he turns back, having covered just over 50 miles.

Five more miles down the trail, in Morrisville, is another one of those confusing sections. The trail seems to end at a culvert where the canal passes underneath Bridge Street. From experience, I know to exit the trail to the east just before reaching this point, turn right onto, then cross Bridge Street, and look for the set of stairs to the south that lead back down to the canal towpath.

In just one more mile is yet another confusing spot. Here the trail seems to end where a set of railroad tracks passes through. It looks as though a singletrack trail has been beaten in where you could climb up to, and cross the tracks, but this is absolutely NOT the way to go, as there may be a high speed train that utilizes these tracks. Again, from experience, I know to backtrack a very short distance, and look for the other singletrack trail to the east, ride (or walk, as the stone in this area is very large and much harder to traverse) along the west side of the rail bed that crosses underneath the previously mentioned obstacle, then head back west a short distance where the canal path continues.

Another mile down the trail is one more exit and re-entry point, where the canal passes underneath Tyburn Road through a culvert. Again, as with the previous obstacle, we needed to bounce to the east, follow the rail bed very briefly where it passes under the road, then take the SECOND right turn to gain access to where the trail continues. The first right doesn’t go anywhere – I’ve learned this the hard way on more than one previous occasion.

Most of the canal path has been very scenic and rural feeling, but the further south we got, we could tell we were getting into a more urban area. There are at least a half-dozen road crossings, including one at the entrance to a Home Depot/WalMart shopping center. At one point we stopped to help a stranger in need, a middle-aged man fixing a flat tire. Although we were on a mission to complete this ride, I felt that part of being a courteous trail user was to at least stop to see if he needed any assistance. Even though I could smell alcohol on his breath, and saw the half-empty bottle of cheap vodka lying in his pile of belongings on the side of the trail, I felt an obligation to help him get his tire with a new tube back on his wheel since I had already stopped. 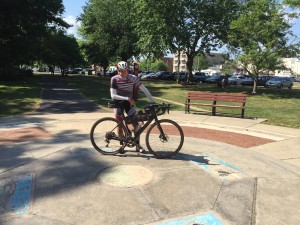 In Bristol, the route gets a little confusing where the trail crosses Bristol Pike at the underpass of I-276, but we made the next left at Green Lane and picked up the trail in between the WaWa and the Bristol Amish Market.  Previously I had thought this was the end of the trail, but on the advice of Terri Monserrat, Elissa Garofalo, and Claire Sadler at the Delaware and Lehigh National Heritage Corridor, we meandered our way another two miles south to Bristol Lions Park to locate the medallion indicating the southern most point of the Delaware Canal on the bank of the Delaware River. 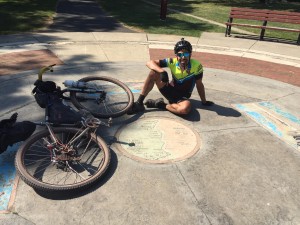 After stopping for a few photographs to prove that we actually made it to the end, we backtracked the two miles to the WaWa where we took about a half hour rest break. Other than a few short bathroom breaks along the way, we really hadn’t stopped to stretch or cool down at all. We had been eating small snacks along the way, but we did this while riding, and nothing substantial. I ate a Snickers ice cream bar and a little more than half of a ten inch Italian hoagie.  I wrapped up the rest of the hoagie and put it in my jersey pocket to save it for later.  After refilling my Camelbak bladder with water, and two bottles with an electrolyte mix, I estimated that I had drank about three quarts of fluid since leaving home – a good gauge that I have been properly hydrating. I put some lubrication on my bike chain, which had been starting to squeak from all of the dry dust accumulation. I also changed lenses in my sunglasses, as we figured it would be getting darker as we approached Easton, our next planned long rest break. At this point we both still felt physically great, and we were at least a half hour ahead of my originally planned schedule. 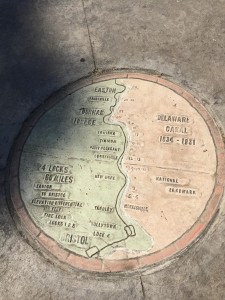