In the mile stretch between our bypasses at Tyburn Road and the railroad tracks, we saw a whitetail deer on the trail. As it started running away from us, I decided to try to take a video of it, and began to give chase. It stayed in front of us for at least a half mile before stopping completely when it saw people coming from the other direction, then quickly turned into the woods.

The trail conditions had been great up to this point. Since we were riding the opposite direction on the trail we had just ridden on earlier in the day, we knew it would be near-perfect conditions all the way back to Easton.  At one point Scott remarked, “this gravel is smooth. Almost too smooth.”  We both had to laugh out loud, because we knew from a previous scouting trip that some of the sections on our route going north would not be as nice, and we would be hitting them when it was dark.

Other than slowing to navigate the same obstacles we had already encountered on our way south, we pretty much rode north non-stop until we got to the bridge construction site near Stockton. There we decided to take a ten minute break, since we were about half way back to our starting point in Easton. We were 90 miles into the “official” D&L Trail ride, but since we had both ridden from home, our odometers were reading a little over 100 miles, and this seemed like an obvious stopping point, about one-third of what we figured our total mileage would be at the finish sometime tomorrow. We had completed a century, which used to be a benchmark of a good, hard ride. It almost seemed insane that we were planning on completing yet two more of these, consecutively, and without sleeping.

We pushed on. Somewhere along the way I reached into my jersey pocket to pull out the remainder of my Italian sub, and finished eating it as we rode. Part of our discussion turned to how to handle our next longer rest stop. My dad was going to meet me in Easton, but Scott had planned on meeting his wife at his house in Bethlehem. Rather than make both stops in such close proximity, which would take entirely too long and allow us to cool down too much, we decided we would part ways in Easton, and rejoin further down the trail. The sun had begun to go down, which made the temperature perfect for riding.  It had reached the mid 80’s in the afternoon, and it had dropped into the low 70’s. 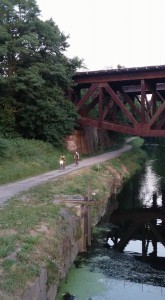 I made the stop in Easton at a little before 8:30, and Scott didn’t even slow down, he continued on to meet his wife in Bethlehem. We didn’t realize there was a festival going on in downtown Easton, and the Forks of the Delaware Park, including the parking lot, was officially closed, as the fire department was soon going to be launching fireworks from that location. My dad managed to convince the fire department to let him in after explaining what we were trying to accomplish, and promising them that we would vacate the area before the fireworks commenced. Curt had also returned to check up on our progress, and somehow managed to sweet-talk his way in as well.  I rested for close to half an hour, refilled my fluids, ate a small snack, oiled my chain, installed clear lenses in my glasses, prepared my lights for night riding, and continued on a little before 9:00, over an hour ahead of my original plan.