As I headed out I made a phone call to Dave Koehl, who had earlier expressed interest in riding through part of the night with me. He was ready to leave his house, and planned on meeting me at the southern end of Farmersville Road.  The next five miles of trail, from Easton to the public boat launch, are paved, which made for a smooth ride.  The next mile after that, from the boat launch to the private boat club, the trail has two routes: a non-technical single track or the gravel access road to the public boat launch. After that mile, it turns back into a two-track gravel trail for quite some time.

About a mile and a half past the boat club is where Farmersville Road ends at the D&L Trail. As I rolled to a stop to wait for Dave, I immediately saw his headlight coming down the hill, as it had then become dark. Perfect timing!  I was glad to have Dave along, as I would not be meeting Scott until we got to the far side of Northampton, at Cementon, and I was starting to feel a bit tired. It was good to have someone to talk to and help keep me awake.

We crossed Main Street in Bethlehem at Sand Island, and continued along the gravel two-track to Canal Park at the edge of Allentown.  This is another place where trail navigation can be confusing without prior experience.  The trail ends at Canal Park, and it is necessary to follow Albert Street until just after the Hamilton Street bridge. At this point, the D&L Trail picks up again as a paved path, up and over a small hill, but only for a half mile before ending at Bradford Street.  In about another half mile, Bradford Street ends, and the route continues to the left on Dauphin Street.  In about another mile, there are options. It is possible to navigate the city streets from here.

The trail winds its way through Catasauqua eventually ending up at the south end of Canal Street Park in Northampton. Although there is a trail through Canal Street Park, it is not legal to ride a bicycle on it, so it is necessary to follow Canal Street for about a mile before turning left on Northampton’s West 21st Street (route 329).  After crossing the bridge on the sidewalks, over the Lehigh River, route 329 becomes Cementon’s Main Street, which you must cross to pick up the D&L Trail at the Cementon trailhead.

As we pulled into the Cementon trailhead, we noticed another cyclist waiting there for us, but it was not Scott. Ryan Close had been following my GPS tracker, and had also decided to join us for a bit of the night ride. I was glad for two reasons – we had another companion to help maintain the sanity level of riding into the night after 150 miles, and Scott was not here yet, which meant I had another chance to rest up a bit. That singletrack experience took a lot out of me, so I took the opportunity to eat a few snacks and hydrate while we waited.

While we were waiting for Scott to arrive, I got a phone call from my mom. She was following my GPS tracker, and had noticed that the last several pins were all on the same spot on the map, she was checking to see that everything was OK. I phoned Scott to check his status, he was about a quarter mile away. He would have arrived at about the same time we had, but he gotten stuck behind a train at the rail crossing at Albert Street in Allentown!  While taking a break at his house in Bethlehem he had taken a quick shower and changed kits – clean shorts, socks, and bike jersey.

Dave and Ryan stuck with us for the next 16 miles – ten miles to Slatington, then another six miles through Lehigh Gap to Bowmanstown, where they decided they would turn around and head home.  Having people to talk with definitely helped take our minds off any pain we were feeling, and helped keep us awake, as the time was approaching midnight.

The obstacles we had to be aware of on the stretch between Cementon and Slatington were the gates. There are several metal gates designed to keep vehicles off the trail, with a narrow opening on one side or the other to allow for bicycles and pedestrians to pass through easily enough.  Since it was late, dark, and we were tired from all of the miles we had already put in, we made sure to always give a verbal announcement upon the arrival of each gate, and which side the opening would allow safe passage.

As we approached Bowmanstown the trail dumped us out onto Riverview Road. After saying good-byes to Dave and Ryan. we made a left on route 895, right on North Kittatinny Road, immediately followed by another right on Bowmans Road, which dead ends into a cul-de-sac. The trail picks up again to the left where we continued on the three miles to Lehighton. This is another one of those confusing sections that is not clearly marked. At Lehighton, the trail becomes Lehigh drive, which looks as though it will continue to the north, but it eventually dead-ends. Here it is necessary to break off to the west, and briefly double back to cross the Lehigh River on Bridge Street to Weissport. In less than a half mile the trail continues on the left all the way up to Jim Thorpe.

At one point in the evening a groundhog ran out onto the trail. Scott was out in front and it looked as though it would pass behind him and in front of me. Unfortunately for the groundhog, it was moving faster than we thought.  It ran into Scott’s rear wheel, bounced off, and scurried back off the trail in the same direction from where it came.

The trail reaches another “endpoint” at the wastewater treatment facility in Jim Thorpe. Here we had to walk with our bikes up a steep incline to our right, up to the railroad bed, where we made our way to the parking lot of the Jim Thorpe Market. After exiting the parking lot, we turned left on River Street, crossed the Lehigh River yet again, and made another left on Lehigh Avenue. We would pick up the Lehigh Gorge section of the D&L Trail from the railyard parking lot on our left, but not before going a few blocks out of our way to stop at the Turkey Hill Minit Market to refuel with some food. Eventually there will be a bridge connecting the end of the trail at the wastewater treatment plant to the Lehigh Gorge trailhead, but construction on that project will not begin until later this year. 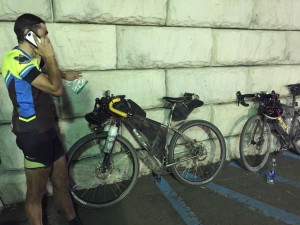 I bought an egg salad sandwich and a cup of coffee.  The first sandwich went down so easy that I went back in for a second.  I don’t think I bothered refilling my hydration, since I knew we would be meeting my mom in White Haven, in just another 25 miles.  I also had not been drinking as much as I had been during the heat of the day, as the temperature was significantly lower.  I put on a thin, wool, long sleeved base layer beneath my cycling jersey, because I was actually beginning to get a chill.  At this point we had ridden about 180 miles, and it was after 1:00am.  We were both obviously tired, but still in good spirits.  I phoned my mom, informed her that I would call her after we had covered another ten miles, which would be when we were about an hour from our meet-up point in White Haven, and we got back on our bikes.