The Lehigh Gorge is usually one of the most beautiful sections of the D&L Trail to ride. At night, we could only see the gravel trail ahead of us, and the tunnel of greenery surrounding us created by the glow of our headlights.  We could tell there was a steep rock wall to our left, and we could hear the water of the Lehigh River flowing over the rocks below, to our right.  Scott commented about a confusing moment he had when he thought the sound of the water in the river was raindrops, and couldn’t understand how we were not getting wet.  We saw a porcupine scurry along the trail next to us, quills in the air as though it expected us to attack.

We had ridden just over 11 miles when I decided to phone my mom to let her know to leave her house to meet us in White Haven, which would be a 45 minute to an hour drive.  Unfortunately, we had forgotten to account for the lack of cellular reception, being in somewhat of a canyon created by the Lehigh River.  We tried sending a text instead, hoping it would go through as we travelled further ahead, and figured she would be watching my GPS tracker and know that we were getting close.  In the worst case, we could call her from White Haven, and just take a much longer break – neither of us were opposed to a longer break, the night riding was definitely starting to take a toll on both of us.

When we arrived at White Haven, my mother, along with two of her sisters, my aunts Cindy and Sue, were already there waiting for us.  They had brought plenty of water, food, and other refreshments.  By my own request, there was a Chipotle burrito and a Jimmy Johns turkey sub, because Scott and I figured that at this point in the ride we would be starving.  Ironically, neither of us was able to eat much of anything at all.  I had some chocolate milk and an orange flavored sparkling water, and decided to put the Jimmy Johns sub in my jersey pocket for later.  I refilled my Camelbak and bottles of electrolyte mix, and changed my clothes.  Putting on clean socks, shorts, and a fresh jersey felt great.  I decided to leave the base layer on, as the temperture had continued to drop even lower.  Our break lasted about 25 minutes.  I was glad my mom had company, because staying awake while driving at that time of night can be hard. At least with riding a bike there is physical activity to keep your heart rate up, which makes it easier to stay awake. 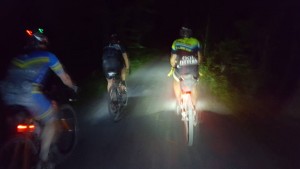 We briefly followed Main Street through the town of White Haven, and again picked up the trail heading north.  The first two miles are a little rough, being a less improved section of the trail.  At Middleburg Road we made a left turn, crossed the railroad tracks, then immediately turned left, back onto the trail.  During the day it is easier to see the paint markings on the pavement indicating where to go, but at night, previous experience was the only guidance we had.

The next nine miles was a slow grind.  While the trail looks relatively flat, the grade had gotten slightly steeper, and it was definitely effecting our cruising speed. While earlier in the day we were able to maintain speeds up to 17mph, we were now struggling to maintain 12-13mph.  We saw lights approaching from up ahead.  A set of three of them seeming to hover and float down the trail.  Were we about to be abducted by aliens?  No, it was a mountain biker with a set of three lights across his handlebars, the rocking motion back and forth from him pedalling made it appear like a plane, or ship of some sort approaching from a distance.  I joked to Scott, “who in their right mind is out riding a bike at 3:30 in the morning that isn’t us?”  His reply was, “that guy is most likely thinking the same exact thing!”

We made it!  We had reached the Black Diamond Trailhead, the end of the completed sections of the D&L Trail. I’m told there are portions of trail further north that may be passable on foot or by mountain bike, but those sections have not been completed or improved, so this marked the end of our northern journey.  “It’s all downhill from here,” Scott chuckled.  We were both pretty exhausted.  I still wasn’t hungry, but knew I had to force myself to eat at least half of that turkey sub, or there would be problems later.  I also had to remind myself to drink, as I had not been hydrating much at all since the stop in White Haven.  After about a ten minute break, we decided to head back south.