The first nine miles were fast!  We were cruising on a slight downgrade, on gravel, in the dark, easily keeping a steady pace between 18-20mph.  We crossed back over Middleburg Road, and the two miles of rougher trail, although slower, just seemed to disappear.  We passed through White Haven, and with no reason to stop just kept pressing on into the Lehigh Gorge.  This is when things started getting really hard for me.  Although the first hint of dawn light could be seen on the horizon, my body was used to being asleep at 4:30 in the morning, and my mind began playing tricks on me. I was literally having hallucinations, seeing things on the trail that weren’t actually there. I tried to keep most of those thoughts to myself, as I didn’t want to freak Scott out, or give him anything negative to worry or think about.

After ten miles we stopped at Rockport, a place in the gorge with a restroom, where rafters often put in to the Lehigh River.  Scott could tell I wasn’t quite right, and convinced me to eat the rest of my sub, along with some sweet snacks to get my blood sugar up a little.  I’m glad I had a partner at that point, because I was having some serious doubts about my ability to safely continue. Scott’s positive attitude and expert advice got me through the toughest moments of this journey.  Between the food, a little extra hydration, and the entire sky beginning to lighten up, I was getting a second wind.

I can’t really remember the remainder of the Lehigh Gorge portion of the trail heading south. My body’s autopilot must have taken over at that point, but by the time we got to Jim Thorpe, it was as if someone had hit my “reset button,”  I was feeling normal again.  We stopped briefly at the bottom of the walk down from the rail bed to remove our warm clothing layers, and continued on to Weissport.  Something about the sun being up must have tricked my body into believing that it was a brand new ride on an entirely different day.  I was feeling great, and any doubts I had about completing this ride were entirely gone.  I was positive that not only were we going to finish, but we were going to ride like champions while doing it!

We continued on, backtracking through all of the steps we had taken in the dark, all the way to Cementon.  Here I decided to deviate from the course I took north the night before. We took the city streets through Northampton and Catasauqua to get to Allentown.  Along the way, as we entered Allentown, Ron Frank, a fellow rider met up with us. He had also been following my GPS tracker, and wanted to ride with us all the way to the finish back in Easton.

We got back on the towpath between Allentown and Bethlehem, planning on keeping a more reasonable pace, around 15mph, as we were well ahead of schedule.  Before we knew it we were pushing 17-19 mph consistently.  As tired as we were, we both just wanted to get this ride done, so we let our habits from training take over and kept moving pretty fast.

My dad met us at Sand Island, to see if we needed anything.  At that point, having previously ridden the remaining section of trail so often, we knew we could have finished without any food or water at all.  Scott’s plan was to only continue on for only a few more miles, just enough so that when he turned around to go back home he would have broken the 300 mile barrier. Since he had started from Bethlehem the previous morning, he had actually ridden the entire D&L Trail in both directions, meeting the requirements of the original intent of the ride. I still had several miles to go. 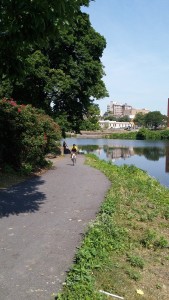 Ron continued to ride with me, and my mom met up with us on her bike at the public boat launch.  The three of us continued at a rather fast pace all the way back to the Forks of the Delaware in Easton.  I had done it!  My dad, a few other family members, and some friends were there to greet me and take a few photos, but that memory is a little blurry.  I was elated to have completed such a challenging goal, and my thoughts were concentrated on getting home, taking a shower, eating, and of course sleeping. 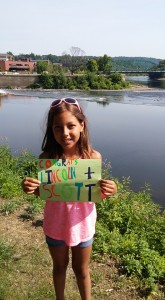 I couldn’t allow myself to accept a ride in an automobile, so I retraced my route from the previous morning, over College Hill and Paxinosa, through Forks Township and Tatamy, then back to my house in Nazareth, on my bike.  I ended up riding a total of 310 miles, with the official “D&L Trail” portion of my ride being 286 miles in about 22 hours. 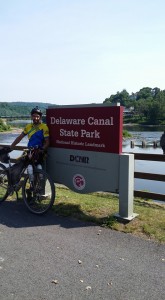 I have big hopes and dreams of turning this ride into an annual event, perhaps with shorter options so that cyclists of all skill levels will have the ability to get involved.  The D&L Trail has enabled me to become a better rider, a more courteous, aware trail user, and a healthier person in general.  I hope that an event such as this would encourage cyclists with any degree of experience to “Get Your Tail on the Trail!“ 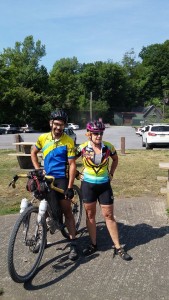