Walking with Ben in the Little Lehigh Parkway

One of the great things about living in Allentown is that you are never very far from a park. I live in the Fairview section of Allentown—just a few blocks from the 15th Street entrance to the Little Lehigh Parkway. I have lived in the neighborhood since I moved to the Lehigh Valley for graduate school, but during the first three years had never walked in the parkway. Around this time last year, my wife and I adopted a dog, Benton (Ben for short), and I inevitably began walking more of Allentown’s streets and neighborhoods. One day, on a whim, I decided to walk up Wyoming Street and check out the parkway. I was immediately hooked. Since then Ben and I have walked in some section of the parkway practically every day of the year. In short, it is a treasure—one of the greatest assets in Allentown and the Lehigh Valley as a whole. 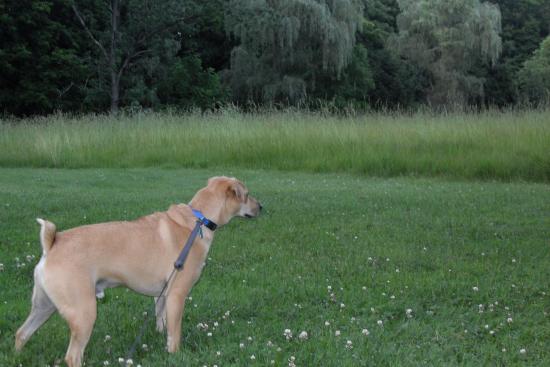 The parkway follows the Little Lehigh Creek from the 15th Street Bridge in the heart of Allentown nearly 5 miles to Keck’s bridge on the rural outskirts of Emmaus. In most areas, wide cinder trails parallel both sides of the creek, linked periodically by bridges that allow for loop trips. Except after the heaviest rains or snow melt, the trails are always in excellent condition for biking, walking, and even horseback riding, and you will regularly see all three uses. Depending on where you choose to walk, you can expect to pass a number of neat little curiosities. If you start out at the eastern end of the parkway, you’ll pass an old train trestle, beautiful CCC-era stone retaining walls and staircases, and dormant iron forges. If you head to the western end, you can feed trout at the Lil-Le-Hi Fish Nursery, which raises 30,000 trout a year, stop in at the Museum of Indian Culture, or learn how to fly fish at the Little Lehigh Fly Shop. Start in the middle, near Oxford Drive, if you like old covered bridges: Bogert’s covered bridge is Lehigh County’s oldest. As if all of this weren’t enough, the parkway boasts a very nice disc golf course that takes you from the banks of the creek to the rim of the valley, plenty of wildlife and native plants, and a world-class Christmas display and tour called Lights in the Parkway. I can testify that one could walk the trails of the parkway for years and still discover something new.

But my walking partner Ben–despite being named for Appalachian Trail visionary Benton MacKaye—does not like trails. He prefers a little space to run in circles, tear through tall grasses, and stomp in the water, and I, always a sucker for his pouty face, am happy to indulge him. So, lately we have been hopping in the car and making the short trip down to the trailhead near Keck’s Bridge, at the western extreme of the parkway. Here, a small, trail-less leg of the parkway is cut off from the main section by some steep slopes and a bend in the creek creating a nice, self-contained park frequented mostly by fly fisherman and the occasional dog walker. During the last year, perhaps because of budgetary constraints or because of ecological enlightenment, the city has allowed native grasses to grow high in this area, creating a riparian buffer and natural, fallow meadow. These “Grow Zones,” as the posted signs call them, are dotted with young maples and oak that will one day fill in the small field along the creek. I remember seeing this area a few years ago, when it was a mowed lawn, and I can say that the transformation is both remarkable and, in terms of the diversity of wildlife, the health of the creek, and the enjoyment of walkers, a change for the better. 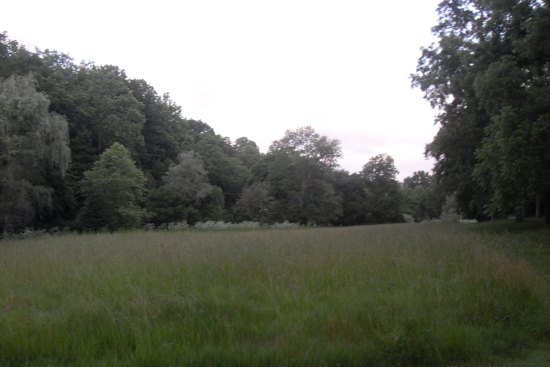 This "Grow Zone" section of the parkway features a meadow of native grasses.

Ben and I usually park in the lot closest to the stone bridge. I set my watch to make sure I don’t skimp him on the requisite hour walk, and then we follow the faint, overgrown fisherman’s path along the edge of the creek towards the bridge, sending brown sucker fish and the occasional trout darting away from our shadows. I like to walk this short section because I can’t seem to catch glimpses of fish along the other faster-moving portions of the creek and because it keeps me close to the garbage can at the parking lot, where I dispose of Ben’s customary black plastic bag. Having finished our fish reconnoitering and other business, we usually stop for Ben to get a drink out of the creek before following another primitive little path away from the lot. I like the sound of the water and watching the birds move from meadow to trees; Ben likes pretending that he sees something in the tall grass and then diving in after it, shoving his nose deep into the growth, snorting, and vigorously wagging his stump of a trail. 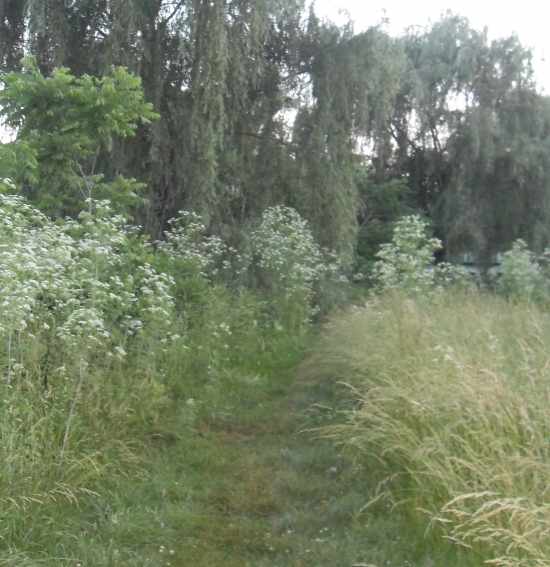 We follow the path until it comes out at Keck’s Bridge, a modern, open grate bridge over which Ben’s little paws cannot walk. We pass under the bridge and along the side of the creek towards the Lehigh Country Club, which marks the terminus of the parkway. There’s a spot where the creek widens and flows, just a few inches deep, around a series of small islands. Ben bounds and I, a little more carefully if no more gracefully, ease myself down off the muddy banks into the always-clear waters of the creek. We take our time crossing it. Ben is not a swimmer. He prefers to lower himself into the water, bite it, and then shake himself off. Looking up the creek towards the golf course we often see ducks taking off or fish jumping. There is one massive carp or catfish that is always on the prowl along that sluggish section, and when Ben nears him, the fish slowly wags his long body and cruises into deeper water. 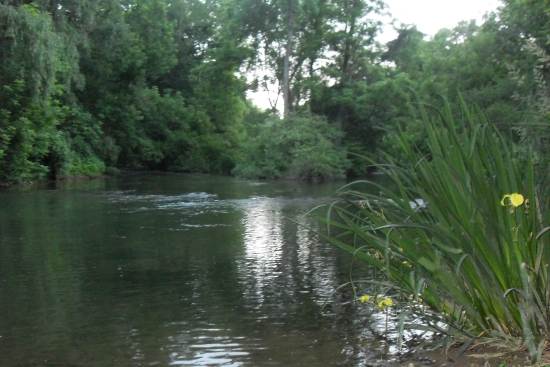 Ben and I walk through the water on our way to the arboretum.

On the other side of the creek, we make our way up the bank and through the weeds into another small section of the parkway—the Arboretum. This field should be a melancholy place—a large number of the metal identification markers are missing or their stone bases are toppled, and, in my many visits to this area, I have never seen anyone reading the markers or admiring the slightly unkempt trees. The city’s maps of the parkway make no indication of the arboretum, and the small gravel parking lot is more often used for lovers’ rendezvous and oil changes than as parking for droves of nature lovers. Ben and I don’t care. We like the arboretum, read the markers identifying exotic tree species, notice when someone cuts the grass, and look carefully in the bushes for the fox and deer who live there. The arboretum spans both sides of Keystone Drive, and we sometimes carefully cross the road and take the short path to nearby Devonshire Park. Between the park and arboretum, the city and radio station WDIY, working through the TreeVitalize program, planted what looks like hundreds of trees, amidst native grasses. In a few years, I will be untangling Ben’s leash from a tree in that woodlot. 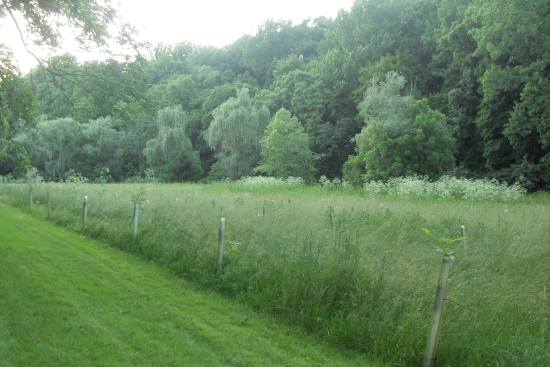 We normally walk in the evenings, which means that the setting sun or an impending thunderstorm dictates when we turn around. If Ben “sees” a lot of prey in the grasses or stops to pee often, we can spend up to 40 minutes walking before we turn around—that makes for a round-trip of little over an hour. Not bad for him or me, after a day cooped up in an apartment and an office. On the way back, after crossing the creek and passing under Keck’s Bridge again, the meadow is wide enough that we can take an alternate route back to the car. This time we walk along the upper tree line rather than the creek. Ben is under the illusion that we are looking for rabbits or groundhogs, but I am really trying to keep him away from the temptations of the creek in the minutes immediately preceding our return to my relatively clean car. When we get back, Ben shakes off and jumps into his seat. By now the sun is setting over the Little Lehigh and the meadow, the crickets are chirping and fish are rising, and we can almost forget that we have spent an hour walking in the third most populous urban area in the state without passing more than a handful of humans or being disturbed by an occasional car on the lazy country road.