The D&L is involved with so many types of projects, over such a wide expanse of eastern Pennsylvania, that it is sometimes difficult to keep them all straight.  We do heritage tourism, economic development, historic preservation, educational outreach, trail building, environment restoration, interpretation, and the list goes on. We are doing so many different things, in fact, that some of the projects totally escape my radar or I only know them as a project name on an annual report.  Sometimes the only way to get a handle on a project and learn about what the D&L is  really accomplishing is to get out in the field.  What you find is often remarkable.

Last Friday, I spent the morning with D&L Resource Conservation Specialist Sherry Acevedo and Borough Administrator Louise Firestone at the Wind Gap Riparian Buffer Restoration Site. The site, located on Route 512, the main street through town, has undergone a dramatic transformation during the last year or so. Before work began, you would have seen an old building sitting astride a stormwater culvert that carried water from a park and some small fields underneath the road and into a marsh that serves as the headwaters for Bushkill Creek. During periods of heavy rain, the culvert and condemned building narrowed the flow of water and forced it back onto the road, often causing severe flooding issues that led to road closures.

With the help of Sherry and Lehigh Valley Greenways (a DCNR initiative managed by the D&L), the Borough of Wind Gap demolished the building, improved the culvert, and planted a native plant riparian buffer to slow and absorb water flow. Removing the building allows stormwater to more easily pass under the road.  Slowing it with well-chosen plants prevents the water from depositing sediment and other nasty stuff in the nearby marsh. A plus for budget-conscious policymakers, the native plants require minimal maintenance—just some selective weed whacking, like we did this morning—and provide much-needed habitat for birds, butterflies, and even little minnows. Periodic rain does the rest.

The site after grading and seeding but prior to any growth.

In fact, even during this relatively dry summer, the plants are thriving. I had briefly visited this site once before, when the plants had only recently been planted and were growing low to the ground. A clearly visible stream passed through the center. This time around, the site resembles a well-cultivated jungle of native bushes and grasses and, instead of a stream, the water slowly passes beneath a dense layer of plants—just as it should, when the goal is to manage stormwater. Sherry pointed out which plants were natives and which were invasives. On the upper portion of the banks, Louise and I weed whacked the native grasses, giving them a healthy periodic cutting from which they’ll soon spring back. I carefully cut around the native bushes, which tended to blend in with everything else and made me paranoid that I was on the cusp of destroying something I shouldn’t. 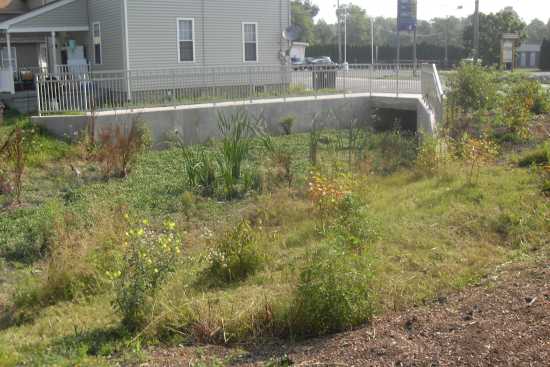 Today the native bushes and plants are flourishing.

Down in the wetter sections, Sherry spot sprayed plants with a water-safe herbicide that can permanently remove invasives in a way that simple cutting can never do. After the spraying and whacking was complete, we spent time pulling weeds from the flower beds and fishing litter out of the water. The amount of cigarette butts, paper, plastic bottles, and wrappers tangled up in the plants reminded me that without them the water would have carried the pollutants directly into the marsh. Because the majority of Bushkill Creek is classified as a High Quality Cold Water Fishery, it is especially important to keep the headwaters free from pollution. 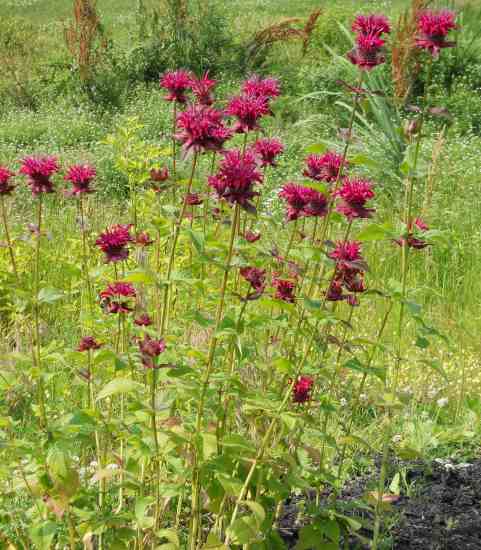 Unfortunately, I had to get back to the office, so I left before all of the work was complete. Sherry and the other volunteers continued with the weeding and then were supposed to plant another truckload of plants that arrived just as I was leaving.  As I drove south on Main Street and away from the site, I thought about the positive environmental and fiscal impact municipalities across the state could make by adopting low-maintenance, low-cost native grasses as a natural form of stormwater management, as Wind Gap had decided to do.  Perhaps one silver lining in this time of economic recession is that more local governments will adopt creative solutions that ease the burden of constant, expensive landscape maintenance, without sacrificing a healthy environment.