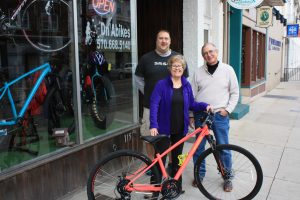 D&L member Janet Starner is all smiles, as she tries out her new acid lava-colored Specialized gravel bike from Dn’A Bikes in Tamaqua.  “It reminds me of my first two-wheeler when I was seven!” says Janet as she coasts along Broad Street where the storefront is located.

Jed and Janet Starner of Lehighton, also participants and volunteers for the D&L Heritage Half Marathon, were thrilled to win the bike as part of a Delaware & Lehigh National Heritage Corridor contest for new and returning members held in July and August.

Owner of Dn’A Bikes Rich Stianche concurs that the bike is perfect for Janet. Stianche generously donated the new bike to the D&L as part of his commitment to community—not to mention his passion for cycling and adventure.  “I sell adventure. You tell me what adventure you want to go on, and we’ll find you a bike to go on that adventure,” he says. 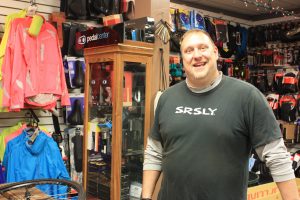 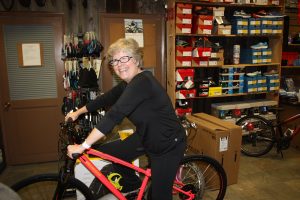 Established in 2012 and family owned and operated, Dn’A Bikes’ mission is to ingrain cycling and adventure within the community, to show people they can change their lives for the better.

“If a bike shop isn’t part of the community, they can’t survive,” Stianche says. “We want to tie everyone together, to show people they can live healthier lives.”

Dn’A carries new and used bicycles, and provides assistance with a custom build, while making sure you are on the best bike for you. Their goals are to help you reach yours—whether cycling, swimming, running, hiking, photography—whatever it is that gets you outside to enjoy yourself. Most of Dn’A’s cyclists travel the D&L Trail from Jim Thorpe to White Haven and points north.

Janet was feeling tentative about biking that day, since she just had a procedure done on her knees. But the bike fit her so well, she had no knee issues at all.

Dn’A also helps run and organize mountain bike races, their very own duathlon, 5k runs/walks, community cycling and group rides, kids’ safety courses, and fun days. If you’re looking for a way to improve your health, fitness level, or just want to find a way to enjoy the outdoors, stop by or give Rich a call!