During the last three weeks, I have made three trips to Philadelphia to participate in various meetings on the development of a Philadelphia Regional Trail Network.  (Yes, that means setting my alarm for 5 a.m., and then sitting in rush hour traffic on the Schuylkill six times.)  As many of you know, southeastern Pennsylvania boasts numerous multi-use trails that are used for commuting and recreation, such as the extremely popular Schuylkill River Trail, the Pennypack Trail, and the Perkiomen Trail.  In the past, organizations have not typically promoted their individual trails as part of a larger system, but, over the last year or so, the William Penn Foundation (WPF) and the Delaware Valley Regional Planning Commission (DVRPC) have started to promote the concept of a regional, unified network.  Their hope is to make the region a destination for tourists who want to experience the city on foot or by bike and could spend a weekend or a week exploring the region’s history, culture, and nature by trail.  They also want to improve trail access to encourage active transportation for residents and all of the public health, recreation, community building, and economic development benefits that go with it. 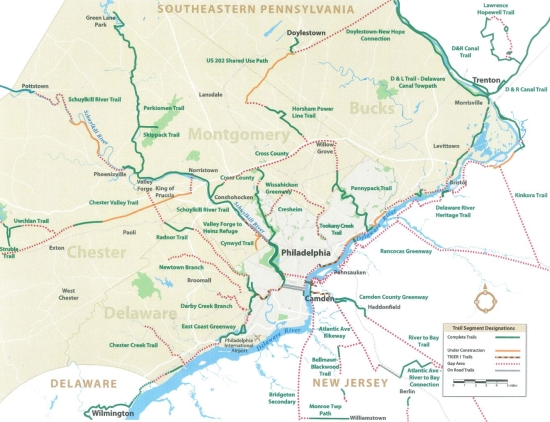 Three weeks ago, Elissa, Scott, Donna, and I attended the Southeastern Pennsylvania Active Transportation Summit, hosted by the Pennsylvania Environmental Council (PEC) and the DVRPC.  At the summit, several speakers highlighted the D&L Trail as the key connection between Philadelphia and the Lehigh Valley.  A map of the regional network—publicly unveiled for the first time at the summit—also designated the D&L Trail as one of three “trunk trails,” or major, long-distance trails that provide the main arteries of the system.  The other two were the Schuylkill River Trail and the East Coast Greenway, which is currently under development.  The well-organized summit included speakers on public health, economic revitalization, trail construction, and bicycling advocacy.  I thought the most powerful presentation of the day came from lunch keynote speaker Mia Birk, a long-time bicycle and trails advocate who recently published Joyride: Pedaling toward a Healthier Planet.  Mia skipped over a lot of the feel-good, fluffy talk you get from most keynote speakers and spoke pragmatically about the challenges and promises of bicycle and pedestrian infrastructure in urban settings.  We all returned from the summit energized and excited about the D&L Trail’s prominence in the regional network.  (For the summit, I created a map that shows the public transportation connections between Philadelphia and the D&L Trail.  Click here to see it.) 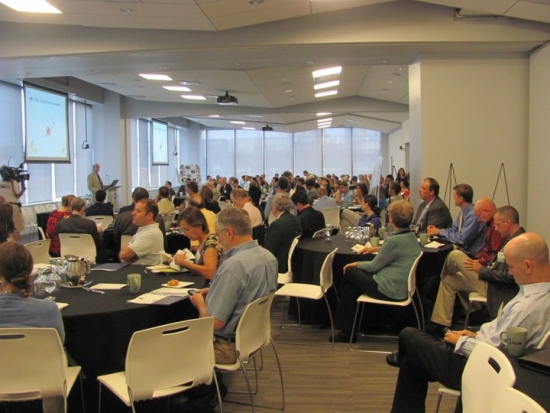 The next week, Allen and I returned to Philadelphia for a facilitated discussion of how to market the trail network, especially to groups of people who do not currently bike or walk.  The meeting was hosted by the WPF and included representatives from most of the region’s major trail and bicycle organizations.  The starting point for the discussion was a research brief commissioned by WPF and produced by Spitfire Strategies, which analyzed perceptions of the regional trail network.  Spitfire found that, although media coverage of individual trails and alternative transportation projects is strong, these initiatives are often depicted as individual efforts rather than part of a regional network.  Therefore, the public has little sense of the interconnected trail network that covers most of the area, and this limits use of the network, constituency building for trail gap funding, and the identification of Philadelphia as a destination for trails enthusiasts.  Our discussion revolved around a number of strategies for improving the network’s identity, including expanded media outreach, cohesive marketing, better communication between organizations, and strategic planning to secure funding and close trail gaps.  WPF’s leadership, along with the participation of well-established organizations, such as the D&L, PEC, DVRPC, and the Philadelphia Bicycle Coalition, will be essential to this process.  Once again, Allen and I returned from the meeting excited about the opportunities for being part of the network and promoting the D&L—Philadelphia connection. 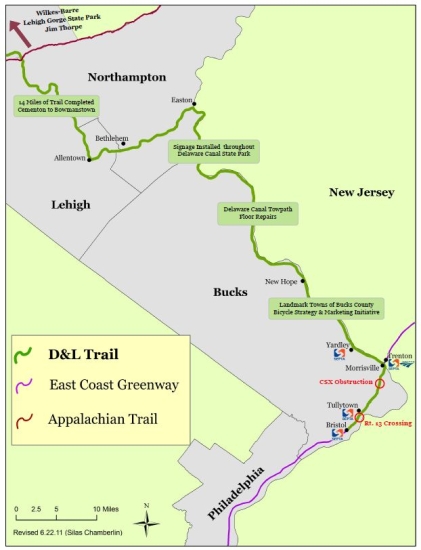 Finally, the next week I returned solo to WPF’s offices for a meeting about a website for the network.  Anyone who has been on the D&L’s website knows that we have put a lot of bloody, sweat, tears, and cash into building our online presence.  We take our website very seriously, both as a promotional tool for our work and as a resource for trail users and other visitors to the corridor.  I was excited to hear about how this website would take shape, and how delawareandlehigh.org could potentially link with it.  (In the back of my mind, I was also hoping to get some tips on how we could develop a Lehigh Valley regional trail network section for our own website).  By this time, I recognized most of the faces in the room from the previous weeks’ meetings, and I think the D&L Trail was probably less-foreign to them than it was just a couple of weeks earlier.  We discussed various issues.  How can we appeal to traditionally under-served demographics?  Should we add a bilingual component?  Who is the primary audience for the website: residents or tourists?  Should the website be used primarily for advocacy or appeal more to general users?  Not the least of our concerns was what to call the website and the trail network.  Many people felt that “Philadelphia Regional Trail Network” just didn’t roll off the tip of our tongues.  Later in the week, I sent in a few possibilities, including simply “The Net,” but I am sure the name is still being debated.  The creatively-named website design firm P’unk Ave, with the guidance of the Bicycle Coalition, will run with our idea over the next few months and come up with a proposed website. 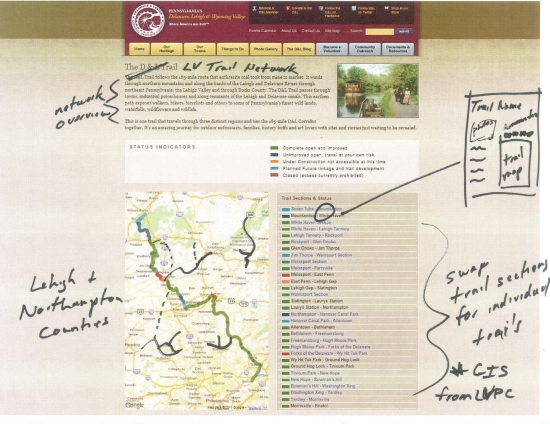 The whole point of describing these meetings—and probably boring you with the nitty gritty details—is to show that the D&L is becoming more involved in what can truly be called a regional trail network.  Not only does our trail intersect the Appalachian Trail at Lehigh Gap and dozens of local spur trails throughout our five counties, but we now also are increasingly tied into Philadelphia’s expanding bicycle and pedestrian infrastructure.  Philadelphia has a very large group of organizations devoted to improving biking and walking opportunities, and I found it remarkable that so many of them already knew of the D&L Trail and respected it as a model to be emulated elsewhere.  I also appreciated their desire to engage the D&L in the decision-making process and give us a seat (or several seats!) in these important meetings.  To be honest, I think it’s a pretty darn exciting time to be an advocate for the D&L Trail and trails everywhere!  We hope you do too.