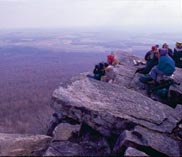 Pennsylvania has 229 miles (369 km) of the Appalachian Trail. In Pennsylvania, the trail extends from the Pennsylvania – Maryland line at Pen Mar,  to the Delaware Water Gap at the Pennsylvania – New Jersey line. It intersects with the D&L Trail at Lehigh Gap (near Palmerton). In the southern half of the state, the Trail passes through Caledonia State Park, Michaux State Forest, and Pine Grove Furnace State Park, which is the nominal halfway point of the Trail. In the northern half of the state, the Trail passes through St. Anthony’s Wilderness, which is the second largest roadless area in Pennsylvania. Popular trail towns are Boiling Springs, Duncannon, Port Clinton, and Palmerton.